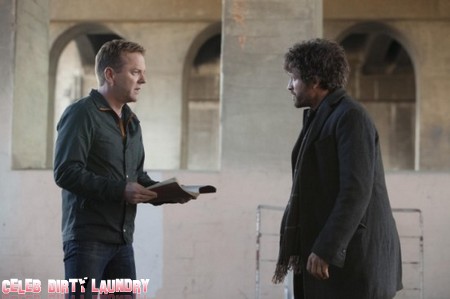 FOX’s new drama starring Kiefer Sutherland, TOUCH returns tonight with a new episode called ‘Safety in Numbers.’  On last week’s episode a robbery triggers a sequence of unpredictable events that connect a distraught flight attendant in New York, a son visiting from India on a mission to spread his father’s ashes, a middle school magician in Moscow, a cancer patient in New York and a mobster in the Bronx.

In the end, all the stories join together and form a circle of heartfelt happiness. I hope they continue to make future episodes as good as this one, don’t you?  If you missed the show you can read our full recap here!

On tonight’s episode when Martin comes in contact with a homeless man who possesses the same obsession with numbers as Jake, he sets out on a series of seemingly unrelated tasks that connect an abused African woman, a group of African boys entering a dance competition and an outgoing woman at California’s Costabella Festival. Meanwhile, Teller (guest star Danny Glover) pays a visit to Jake’s board-and-care facility and emotions run high for Clea.

Meanwhile Kiefer’s commitment to Touch has forced movies bosses to push back the film adaptation of 24.  The hit action drama starring Kiefer Sutherland came to an end in 2010 after eight seasons on air.

The show airs at 9PM tonight on Fox and we will be live blogging it will all the up-to-the-minutes. So come back to this spot and spend the evening with us enjoying Kiefer! Make sure to refresh often to get the most current update! While you wait for the recap check out 2 sneak peek videos of tonight’s episode HERE!

RECAP: Martin gets a phone call, there is no one on the other line, he thinks it was Jake and heads over to see him. When he gets there, Clea sees him and tells him the childre are sleeping, he should leave. Martin is insistent that his child is communicating with him and he needs to see him. Clea warns him that the state could get tough, then Martin asks can he please see his son. When Martin goes into the room, Jake is not there, Martin runs around the halls and finds Jake writing “3287” over and over again on paper. Clea takes Jake back to his room and just before he turns the corner, he turns around and looks at his dad, Martin knows that the number is a message.

Martin goes to see Teller and tells him about “3287”, Teller tells him that Jake is suffering until things are right, the numbers represent pain. Martin tells him that if he continues to chase down these numbers the state is going to take Jake away from him.

An African woman is doing a test and she enters the numbers “3287”, she heads outside and two boys are outside of the building, the jam a window with a bottle cap.

A girl passes security at a dance competition, she is wearing a red dress. The Beast Master starts dancing, the girl is now in the audience, she texts someone who she is supposed to meet there.

Martin is walking on a side walk, a black woman comes running and gets hit by a car, he bends down to check her and a man steals a book from the woman that got hit.

Back in Africa, two woman are talking, one is calling for her friend and when she comes out of the house she has bruises on her face. She tells her that she must take the computer test as well so she can move to the city with her. The abused woman’s man comes out of the house and hits the other woman, threatens to snap her neck.

Martin is still chasing the guy who stole the book, he catches up with him and he tells Martin that he is the invisible knight. The man claims the book belongs to him, Martin looks inside of it and the numbers “3287” are written all over it. The man tells Martin that the numbers mean the dragon is loose and they have to stop it. Martin tells him that his son has a book just like his with the same numbers and wants to know if he sees the messages as well. The man has to go, he says the thread is pulled really tight.

Jake is with Clea, she tries to get his attention but he keeps playing with a red car, she takes it from him to try and get his attention. Jake takes the car back and walks away, he heads downstairs and Clea follows him.

In Africa, there are boys dancing around, their sister comes up and tells them to stop. The boys want to compete in the dance  competition they noticed on the computer.

Martin is still with the guy and the book, he is watching a woman cross the street. He tells Martin that it is his job to get them where they need to be, he can’t be late. Martin tells him that his son wants him to help him some how, the man says that Jake wants him to stop the pain. The guy leaves a carnation on a bench and a women sits down and picks it up, the guy on to tell Martin that he tried to kill the dragon, but he couldn’t. The final battle is tonight, Martin can’t figure anything out, but then he sees the two women walk into a building, he looks up and sees that the building they are standing in front of has a dragon on the front of it.

The girl in the red dress is still at the festival when two Asian girls come around her and ask her why she is sad, she tells them that she has been stood up. She travelled hundreds of miles to meet someone she met online. The Asian girls are set to perform and leave their cell phone behind.

In the dragon building, the two woman spark up a conversation in front of the elevator. One woman wants to settle, this must be a court case, the other woman tells her to wait to see what they offer them, don’t take a settlement until then. Martin is right behind them and overhears. Martin tries to sneak in pretending to be a lawyer, a guy walks in and he recognizes Martin as being a reporter. He tells Martin to get Roger King to do an interview. Martin goes to see him and buzzes up, he tells him he needs to speak to Roger King about the class action suit against Morton Starling, the guy tells him King is dead. Martin thinks for a bit, then asks if he knows anything about the invisible prince, the guy buzzes him up. Martin goes up and the guy tells him that his brother was a genius with numbers, he worked for Morton Starling, the invisible prince were stories their father read to them when they were little. He claims his father cheated people out of millions in the company and his brother disappeared.  Martin thinks the Invisible Prince is in fact his brother that disappeared.

Clea is with Jake, she is wondering why he keeps trying to go near a specific room. Clea gets a phone call, it is her mom, when she answers someone else is on the phone and Clea says “Oh my God, I will be right there”. Clea is at the hospital, she hasn’t seen her mother in six years. Clea goes in to see her mother, she tells the nurse it is not her mother. The nurse tells her that the woman’s cell phone shows Clea was the last person she called.

In Africa, the two boys break in to the computer room and log into the dance competition. They call themselves Silhouetto and they are up in two minutes.

Dr. Teller goes to the facility where Jake is and asks to speak to the Director, it turns out that he knows her. He tells her that he wants a tour because he has a patient that he may want to refer there.

Martin is rummaging through boxes at the King’s sons’ apartment, he finds a safe and opens it with the numbers “3687”. He finds an envelope, it has papers inside of it that Martin calls “the magic sword of truth”. He has 22 blocks to run in 17 minutes.

In Africa, the guy is beating up on the girl, she is crying loudly and another woman hears it, takes a pot and heads over there. The woman keeps hitting the pot with a spoon, at the same time Jake is screaming, more women come out of the houses banging their pots with spoons. Meanwhile, the children in the computer room are dancing and doing their performance for the dance competition. Dr. Teller is still getting his tour when he sees Jake in a room and he starts making loud noises like a car’s wheels in a race. People in the audience are enjoying it more than the Beast Master. Jake is still screaming, the kids are still dancing, the crowd is screaming the kids name. Jake is still screaming, Martin is running and arrives just in time. The reporter is shocked that Martin has the evidence.

The girl in the red dress is laughing, she is looking at something on the Asian girls phone, she thinks you are supposed to record a message and then pass it on. She is talking to the Beast Master, who is upset that he lost to a ten year old.

Clea is back at the facility and finds Jakes red car outside of room number 6. The African boy hugs his mother, a news program announces that the people against Morton Starling won their case. In AFrica, the abused girl is taking the computer test. Clea goes to see Jake to give him his car, she sort of apologizes to Martin and tells him that she is going to try and be a little more understanding in the future.

Clea leaves the room and Martin starts reciting the story about the invisible knight to Jake.