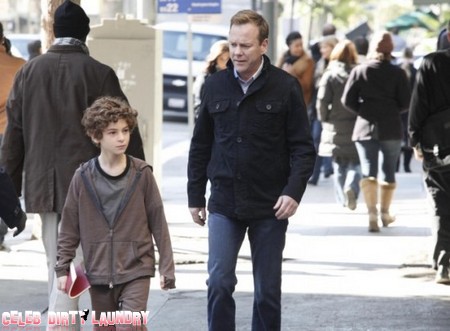 Kiefer Sutherland is back with his new FOX drama series Touch.  Tonight’s episode is called “1+1=3.” Stand by as we live blog the show with all the up-to-the-minute details.  In Touch, Kiefer plays the father of a 10-year-old boy who has never spoken and doesn’t communicate in any traditional way.

In the pilot episode when Martin discovers that Jake can predict events before they happen, everything changes. Martin meets social worker Clea and Professor Arthur Teller who may have the keys to help unlock Jake’s mind.  We covered the premiere episode and if you missed it you can read our full recap here!

On tonight’s episode Martin Bohm (Kiefer Sutherland), a widower and single father trying to connect with his mute 11-year-old son Jake (David Mazouz), is led to a pawn shop where a robbery triggers a sequence of unpredictable events that connect a distraught flight attendant in New York, a son visiting from India on a mission to spread his father’s ashes, a middle school magician in Moscow, a cancer patient in New York and a mobster in the Bronx. It’s up to Jake and Martin to link the thread between them all in the World Premiere “1+1=3” episode.

The show airs at 9PM tonight on Fox and we will be live blogging it will all the up-to-the-minutes.  So come back to this spot and spend the evening with us enjoying Kiefer!  Make sure to refresh often to get the most current update!  While you wait for the recap check out a sneak peek video of tonight’s episode below!

RECAP: Jake is sitting with his dad when social worker Clea arrives at the door, she wants Martin to take Jake back to the hospital. Martin refuses because he thinks he has had a breakthrough with his son, last night was the first time he talked and the first time he let his father touch him.

Clea tries to reason with him, it’s serious that Jake escaped from a locked facility. She wants Martin to go back to work and let her take care of Jake, he refuses. Clea advises Martin that she is going to call the police, he leaves her no choice. Martin tells her to wait.

Martin goes over to talk to his son and tells him that he is going back to the facility, he writes on his father’s hand 7186735296.

Martin is back at work, he takes one of the dogs and a cart to load it in a truck and when he turns his back, the dog gets loose.

Meanwhile, there is a flight attendant rushing in the airport, she bangs into a boy who is carrying his father’s ashes and it drops to the ground.

Jake is with Clea, he is writing the numbers he gave his father over and over again on a piece of paper. Clea brings him a bowl of popcorn, he takes it and designs a happy face, she is delighted. Jake is back to his numbers, Clea suggests that they finger paint. Jake takes a little of the red paint and starts swirling it around on his hand, Clea goes to get something to wipe it up and when she turns back around Jake has written the numbers in paint on paper and he is gone. Clea heads downstairs to find him, she finds a door with a lock on it and she thinks, then she puts in the numbers “5296”, the lock opens and so does the door.

Two Asian girls are taking videos of themselves at JFK airport, when the same flight attendant passes them. She goes over to see the guy from India whose ashes she bumped out of his hands. He came to New York because his father loved it, especially baseball so he’s headed to Yankee Stadium. The flight attendant offers to take him and his father’s ashes to Yankee Stadium.

Martin goes to pawn shop, he tells the guy behind the counter that his son sent him there. All of a sudden a robber comes in, he demands for Martin to go down on the floor, he wants the money from the pawn shop owner. Martin jumps the robber, so does Martin.  The robber gets away, but Martin saves the shop owner.

The robber meets a mombster in the parking lot and gives him the loot, it was a payment for money he owed him and he’s not impressed. The robber gives him Patrick McGrath’s home run ball, it’s worth $50,000.00. The mobster takes the ball and throws it, he tells the robber that he has three hours to get his money. Martin follows the pawn shop owner to the hospital and the guy thinks he is stalking him.

The flight attendant is in the bus with the guy from India, she finds out that he made no arrangements at Yankee stadium so she tries to explain that they might not let him spread his ashes there. He goes on to tell her that he was a disappointment for his father and he owes him respect.

Clea calls Martin, Jake is gone again. Martin looks out the window from Teller’s house and sees Jake getting in a bus, he runs out of the house screaming his name.

In Moscow, a middle school magician is nervous to perform in front of fellow students. He makes a bird come out of a hat and only one little girl in the audience claps. The magician is so nervous that he knocks over stuff he had on a table. Later, he heads back to the store where he bought the stuff and tries to return it because he tells the shop owner it doesn’t work. The owner tells him no, he meets the little girl who clapped for him in the shop and he asks her why nobody claps him but her. She tells him that it is because people are afraid of his father, he is like Tony Soprano, he hurts people.

Martin and Jake get off the bus, they head to the pawn shop. Martin tells him that there was a robbery earlier in the day and thinks he may have saved the owner’s life. He asks Jake if that is what he was supposed to do. Martin looks at the phone number on the window, it’s not the same number as Jake gave him. When Martin calls the number, they hear a phone ring, but it is in an apartment above the pawn shop.

Martin and Jake head upstairs to see where the phone was ringing, they narrow it down to an apartment, knocn on the door and when nobody answers, Jake pushes the door and it opens. They go inside, there is mail, the name on it is Rebecca. Jake finds a baseball bat with the numbers 5296 on it. A guy walks in, he asks if they are friends of this cancer victim named Arnie and Martin says yes.

The flight attendant is with the guy from India, they are at Yankee Stadium. The attendant speaks to a guard and asks if they can please go in because the guy came all the way from India, he says no. The Indian guy says that he failed and was a fool to think he could even do this. The attendant looks over her shoulder and she sees the dog that escaped, she runs after it.

Martin is still in the apartment with his son, the guy comes back and hands him a wad of cash then asks him who is again. Martin says “I told you” he was a friend of Martins. The guy goes to jump him, Martin take the baseball bat and hits him, then runs out of the apartment with Jake, the wad of cash and a bottle of Arnold’s pills.

Outside, Martin grabs a cab, he and Jake take off. The cab drive asks where he wants to go, Martin looks at the pills and asks to be taken to the hospital.

Martin and Jake arrive at the hospital, they go in to see the guy who owned the pills, Arnie. Jake looks out the window, then Martin, they see a guy walking over the pathway on the bridge,

The robber goes to see Mr. McGrath at Yankee Stadium and tells him that when he sold the ball he caught, the whole chain of events started and he needs to give the ball back to him. He leaves the door open a bit, then goes outside to speak with the mobster. The Mobster gets a phone call, it’s his son in Moscow, he asks his father if he hurts people, he wants to know the truth. His father tells him no, his son believes him and asks how he can convince the people to understand that his father is not like that. His father hangs up the phone and decides to give the robber a second chance.

Martin sees how all the pieces fit together. Rebecca is with her father, Arnie in the hospital. The guy from India is in Yankee Stadium with his dad’s ashes. The boy in Moscow is happy, his dad is home. The robber of the pawn shop is happy he had a second chance.

Jake is in bed, Martin tells him that there were so many things he wanted to teach him and turns out that Jake is the one teaching him and he’s ok with that, he understands now that it’s a roadmap.

Wow, that was an awesome episode – I had goosebumps! How did you like the show, sound off your comments below, did you like it as much as I did?