BY Rosie Leblanc on April 16, 2012 | Comments: one comment
Related : Ashton Kutcher, Recap, Television, Two and a Half Men, Uncategorized 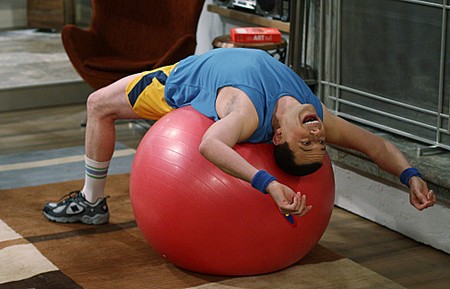 After a one week hiatus the Emmy award winning series Two and A Half Men returns to CBS with a whole new episode called “Mr. Hose Says ‘Yes.”  Don’t forget we are the go to site for a live blog of the episode – you never need to go anywhere else.  We will provide you with all the up-to-the-minute details as they unfold!

Did you see the last episode of Two and a Half Men when Alan tells Walden that Lyndsey’s Mom and his Mother have become lovers.  Walden feels pretty down and once Alan drops this info Walden tells him that makes him feel better.  If you missed the episode you can read our full and detailed recap here!

On tonight’s show Walden’s commitment is tested when Zoey and her daughter come to live with him and he has to ask Alan to move out.  Alan does not look pleased when he gets the news.  Meanwhile, Alan gets more than he bargained for when he moves in with Lyndsey.

MAJOR SPOILER – Kathy Bates will be coming to the show April 30th, 2012.  Alan suffers a minor heart attack. That’s when Kathy Bates, as Charlie’s ghost, visits Alan’s bedside. “We knew we wanted Charlie’s spirit to visit with Alan while he was sedated in the hospital.  The question was how. When Kathy’s name was first floated as ‘his incarnation’ we all just started laughing and decided to reach out to her. We were also determined to stay true to the character of Charlie Harper, and that was a promise I made to Kathy when we first talked. Thankfully, Kathy immediately saw the twisted humor of it all and signed on.”

Every time Chuck Lorre gets another to chance to ridicule Charlie Sheen he takes it.  This is because he lost his public battle with Charlie and he knows it.  Chuck was made to appear spiteful and cowardly by Charlie, not to mention that everyone could see that he was a mean bully.

We will be live blogging tonight’s show with all the up-to-the-minute details at 9PM EST so make sure to come back to this spot and watch the show with us. Make sure to refresh often to get the most current update! While you wait for the recap you can watch a sneak peek video of tonight’s show here!

Tonight’s Recap: Alan is on an exercising ball and lets go a fart (this show is really getting classless). Walden walks in and asks Alan if it’s really a good workout and then Walden tells him that he has a ball hanging out (classless again). Walden goes on to tell Alan that Zoe is coming over for the weekend with her daughter for the spring break; Alan says that he will make himself scarce and have Jake stay with his mom. Walden tells Alan that he wants him to move out for a week and maybe this could be a trial run just in case he and Zoe move in permanently together. Alan is convinced he doesn’t need to panic, he just needs to find a new temporary home….yeah right!

Walden finds Berta taking a break, he tells her that Zoe is coming to visit for a week with her seven year old daughter and Berta tells him she is leaving. Walden tells her that Alan and Jake will not be there and he wants to find out how it would feel to be with Zoe and her daughter alone, with only a housekeeper.

Zoe and her daughter arrive, Zoe tells Walden that she is terrified because if this doesn’t work, then it means they are done. Alan is just about to leave the house, he is going to stay with Lyndsey for a week.

Alan is alone with Lyndsey, she wants him to fix the toilet and he thinks she is role playing, but she isn’t, she just wants him to fix toilet. Lyndsey goes on to tell him that when he is done with that he can clean the patio furniture and set it up.

Zoe has to go to the store, she leaves her daughter alone with Walden and tells them that she will be back in an hour.

Shortly after Zoe leaves, her daughter tells Walden she is bored. After Walden has pretend tea with her, plays hide and seek, puppets, bakes, plays airplane, finger paints and more… until Walden passes out, then Zoe arrives back from the store.

Meanwhile, Alan is downstairs and finds that Lyndsey has a blown out fuse, he tries to fix it by putting a copper penny in it and zaps himself.

Walden reads a bedtime story to Zoe’s daughter and just when he thinks she is asleep, he tries to leave the room only to find out that she is awake. She gets him to adjust the lights until it is just right for her, and then looks under the bed for monsters, then in the closet for monsters, then she is thirsty and Walden offers her water but she wants Pellegrino.

Alan is in bed with Lyndsey, his hand is still numb from getting zapped and Lyndsey hears a noise. Lyndsey tells him to go check it out and he says, “what with a dead hand and an erection”, but he goes anyway. Alan is downstairs with a tennis racket when Jake hits him with a door on his way out; it was Jake in the house.

Walden and Zoe are in bed, the sun isn’t even up yet and her daughter wants breakfast, eggs Benedict to be exact.

Lyndsey took Alan to the doctors, he has his nose wrapped up because the door hit him square in the face. Lyndsey tries to help him undress to get into the bed, she pulls down the zipper and it gets stuck which makes Alan fall off the bed, flat on his face.

Berta walks in and finds Walden asleep at the kitchen table, he made eggs that were too dry, waffles that were ‘bloody dreadful’ and he’s exhausted, he tells Berta he can’t do this anymore.

After a nap, Alan wakes up and Lyndsey smells something and thinks it is a dead possum under the house, she is about to call an Exterminator and Alan tells her not to, afraid he will never get laid, and goes under the house himself with his broken nose.

Walden is out at a bar to meet Alan. Walden is shocked to see the look of Alan and asks him what happened. Well, Alan explains that he has a broken nose; he was electrocuted and maybe has rabies. Alan asks Walden how things are between he and Zoe and her daughter and Walden says “if I could get rid of them”, to which Alan gives him a big hug and says yes.