BY Robyn Good on April 16, 2012 | Comments: one comment
Related : Preview, Spoiler, Television, Two and a Half Men 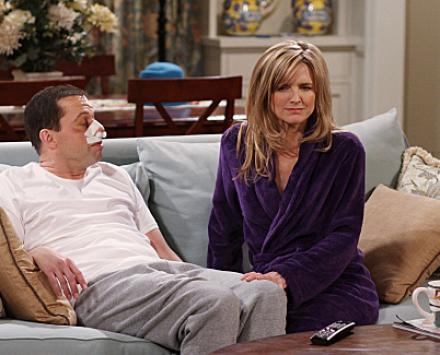 After another hiatus Two and A Half Men returns tonight with a new episode and we have the low-down on what is going to happen.  Did you see the last episode of Two and a Half Men when Alan tells Walden that Lyndsey’s Mom and his Mother have become lovers.  Walden feels pretty down and once Alan drops this info Walden tells him that makes him feel better.  If you missed the episode you can read our full and detailed recap here!

Tonight’s episode is titled “Mr. Hose Says ‘Yes'” and it is the twenty-first episode of the ninth season.  Tonight, when Zoey and Ava move in, Walden finds out if his commitment is up to the test. Meanwhile, Alan has his own challenges when he moves in with Lyndsey.  It does not turn out as he expects.  Just when you thought Two and A Half Men had no surprises – Walden asks Alan to move out.  Let me tell you Alan is shocked and has to move in with Lyndsey.  According to the promo we should get ready for a real shocker.  The shocker would be if they did not spent the episode talking about Walden’s ‘python.’

Meanwhile, it is looking more and more like Ashton Kutcher will be back for another season playing Walden.  Rumor has it contract talks with Ashton and CBS are moving in the right direction.  The show has been doing well for CBS, averaging 15.6 million viewers for most of the season.  What do you think, was it just curiosity that kept people coming back?  Do you think the show can continue to do well for another season?  Hit the comments and let us know!

Check out the preview below for tonight’s episode and don’t forget to come back for our full official recap tonight, only on Celeb Dirty Laundry.