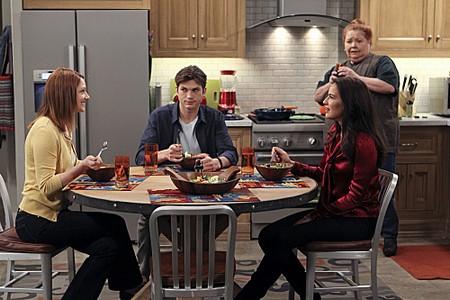 After a another hiatus Two and A Half Men returns to CBS tonight with a whole new episode called ‘Grandma’s Pie’.  Last we saw the show Alan and Lyndsey introduced their mothers to one another.  Meanwhile, Jake and Eldridge enlisted Walden to drive them to a high school party.  Georgia Engel guest stared as Lyndsey’s mom.  If you missed the episode or want to get caught up you can read our full recap here!

On tonight’s show it is Grandma’s gone wild.  Alan tells Walden that Lyndsey’s Mom and his Mother have become lovers.  Walden feels pretty down and once Alan drops this info Walden tells him that makes him feel better.  Walden breaks the news to Zoey that he is going into business with his ex-wife. Meanwhile, Alan and Lyndsey try to come to terms with their moms’ new relationship.

Meanwhile Courtney Thorne Smith who plays Lyndsey,  Alan’s ex-wife and current flame talked about her mother and Alan’s mother dating.  She said: “You work on Two and a Half Men long enough and you realize that they will go anywhere. Luckily it’s my sense of humor, so the further they push it, the better. I love working with Holland [Taylor] and I love that Georgia [Engel] can say the most horrible thing in the world but do it in that adorable voice and it becomes the sweetest thing ever. It’s stunning how she brings words to life.”  What do you think of them dating?

We will be live blogging the show with all the up-to-the-minute details at 9PM EST so make sure to come back to this spot and watch the show with us. Make sure to refresh often to get the most current update! While you wait for the recap you can watch a sneak peek video of tonight’s show below.

RECAP: Walden is on the phone with Zoe, she is coming back soon. Walden tells Alan that he is missing Zoe and he has to tell her that he started a new software company with his ex-partner and his ex-wife, Bridget. Walden is going to try to just slip it in with out her noticing and Alan says sounds like the story of his life. Walden surprises Alan that he is going to give him 100 shares, but still doesn’t know how to tell Zoe, Alan says “dumb the bitch, don’t let her screw this up for us”. Alan tells him that he has bigger problems, his mother and Lyndsey’s mom are having a lesbian relationship.

Zoe is back, Walden is in bed with her and tells her about the company. He let slips that there is a third partner and Zoe asks who, Walden tells her it is Bridget. Zoe is surprised that he choose to go into business with a woman who drove a car through his living room, he tells her not to worry because she is sleeping with her other partner. Zoe is upset and Walden says life would be so much easier if he dated dumb chicks.

Lyndsey and Allan are talking about their moms and she says that she finds it weird to be dating him when his mother is taking advantage of her mother. The two moms walk in and Lyndsey’s mom announces that they have matching tattoos and they are moving in together – so this makes Alan and Lyndsey step brother and sister.

Zoe is leaving, she is upset and Alan tries to convince her to have dinner with him and his ex-wife to prove to her that everything is ok, Zoe says yes.

Alan and Walden are talking over tea, Walden tells Alan that he thought of the dinner because he is not going to “dumb the bitch.” Alan tells they should meet after their respective dinners and compare which one was worse.

It is dinner time with Walden and his women, the conversation is strained and the two women just keep staring at each other. Bridget tells Zoe that obviously this is an awkward situation because she spent many happy years with Walden but she has nothing to fear. Bridget and Walden start talking shop and Zoe tells her that she doesn’t mind. Bridget goes on to tell Zoe to keep it casual that way Walden won’t think she is after him for his money. Zoe is upset and Walden tries to change the subject.

Lyndsey and Alan are in the car with the boys and Eldridge wants to know what is going on between both their grandmas. Alan tells them that they just want to be room mates and take care of each other.

After dinner, Bridget is getting ready to leave and she asks Zoe not to let Walden to wear sandals to the meeting tomorrow. Bridget is gone and Zoe tells Walden that the dinner did not go great, the horrible woman won’t be happy until she destroys their relationship – she leaves.

Lyndsey and Alan are at dinner with their boys and their moms. Alan’s mom shares a toast with everyone, welcoming Lyndsey’s mom into their family.

Zoe is on a video chat with Walden and she tells him that maybe it is better if they both go their seperate ways, Walden makes a new proposal, why doesn’t she and Ava move in with him because he loves her. Ava runs in front of the computer and begs her mom to say yes, she loves Walden. Zoe asks Walden, if they move in, isn’t someone going to have to move out? Meanwhile, Alan is driving home and gets a shiver up his spine.

Alan and Walden are talking over tea again, Alan says that the dinner went well and Walden says his was great as well.