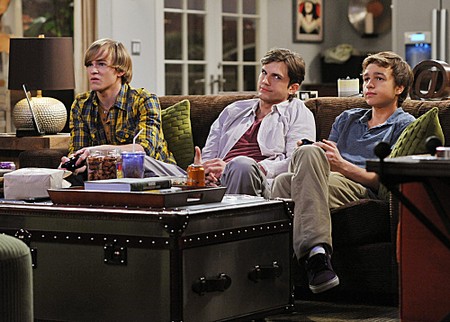 After a long hiatus Two and A Half Men returns to CBS tonight with a whole new episode called ‘Palmdale, Ech.’  Last we saw our hero Walden’s casual lifestyle was interrupted.  Things got tense when Walden’s estranged business partner, Billy (played by Young Adult’s Patton Oswalt) showed up out of no where and wanted to bury the hatchet.  If you missed the episode you can read our official recap here!

On tonight’s show Alan and Lyndsey introduce their mothers to one another. Meanwhile, Jake and Eldridge enlist Walden to drive them to a high school party.  Georgia Engel guest stars as Lyndsey’s mom.

The first season of Two and a Half Men with Ashton Kutcher is nearing the end. What did you think of his character Walden and did you enjoy getting to know all about his python? Yeah, did nothing for me either.  We have some spoilers for you of the finale of season 9 here – if you want to know :-)

We will be live blogging the show with all the up-to-the-minute details at 9PM EST so make sure to come back to this spot and watch the show with us. Make sure to refresh often to get the most current update! While you wait for the recap you can watch a sneak peek video of tonight’s show below.

The boys want to play a video game, they join Walden on the couch. Walden tells them that when his parents divorced, he channelled his anger into making his first million.

Alan is with Lyndsey in the car, they are on the way to pick up her mother. He asks her if she is excited and she says no, she is just waiting for the muscle relaxant to kick in. She goes on to say that her mother has been worse since her father died and she did try to kill him once. When he did end up dying, she said she lost the love of her life. Lindsey gives Alan advice not to mention Price is Right to her mother, she hates Drew Carey and loves Bob Barker.

Back at the house, Walden is playing video games and Jake asks Walden if he is going to marry Zoey. Walden says he doesn’t want to since he just recently got divorced, Edridge tells him why not Zoey is hot. Jake says, it’s not important the she is hot, it’s important that she stay hot.

Lyndsey and Alan have picked up her mom, she has already made plans and her mother doesn’t seem to be thrilled about them. Alan tells her that Lyndsey is a good girl.

Walden is with the boys and he makes a comment about them graduating this year, he asks them if they have any plans. Both tell Walden that they want to work for him as consultants. Eldridge tells Walden one of his app ideas, it makes your junk look bigger when you send a photo of it to a girl, it’s called “junk shop”.

Lyndsey’s mom has fallen asleep in the car, she is thankful for the quiet. The two come up with a plan to introduce Lyndsey’s mom to Alan’s mom. Alan reminds Lyndsey that she still owes him “one” for his birthday and now she will owe him another one for this great idea. Lyndsey tells him that if her mom wasn’t in the back seat it would be her head steering the car. Alan looks over at mom in the backseat, all of sudden Lyndsey goes for it and the car is swerving all over the place.

Back at the house, Alan tells Walden he is heading out to dinner. Walden goes to warm up some milk, the boys are in the kitchen and ask if they can borrow his car to go to a slammin’ party in the valley. He says no, but he will drive them. The two have come up with another app, how long you can hold your breath under water and Walden asks them how that is different from the the stop watch on their phone.

Alan has picked up his mom, she is wondering why it took so long for him to introduce the two, then he goes on to say that Lyndsey’s mother will be at dinner at well. Evelyn isn’t thrilled, she doesn’t like old people.

Walden is in the car with the boys, they seem to be lost and Walden is annoyed.

At dinner, Lyndsey is making conversation with Evelyn who makes a comment about uncircumcised men being “exotic cuisine”. Lyndsey and Alan want to leave, Evelyn wants to go dancing with Jean. When Jean asks Evelyn if she thinks they will find cute guys to dance with, Evelyn puts her arm around her and walks out of the restaurant that they are not looking for guys.

Meanwhile, the boys end up at the wrong house with a guy who wants to know if they know how to wrestle.

Walden is at a restaurant with Jake and Eldridge, the boys are not happy that they couldn’t find the party. Walden tells them to hook up with two girls that are there now and forget about the party.

Lyndsey and Alan are in the kitchen having breakfast, Jean walks in and tells them she adores Evelyn. The two are shocked! Evelyn walks in and kisses Jean on the mouth and says “good morning darling”, Alan tells Lyndsey he is sorry.

That’s it for tonight, did you enjoy the episode? Sound off your comments below, we love to hear from you.