BY Rosie Leblanc on February 27, 2012 | Comments: one comment
Related : Ashton Kutcher, Recap, Television, Two and a Half Men 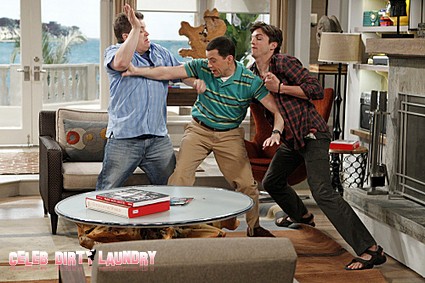 Are you ready for a whole new episode of Two and A Half Men and Walden tonight? Tonight on CBS episode 18 of the show called ‘The War Against Gingivitis’ airs.  On last week’s show strained relationships and girl-fighting result when a huge storm traps Walden, Alan, Zoey and Lyndsey in the house on Valentine’s Day. Not only are Walden and Zoey in trouble but so are Alan and Lyndsey. If you missed the episode you can read our official recap here!

On tonight’s show Walden’s casual lifestyle is interrupted. What if you could make a fortune, but your business partner was your worst enemy? Well that is what happened to Walden and things get tense tonight when Walden’s estranged business partner, Billy (played by Young Adult’s Patton Oswalt) shows up out of no where and wants to bury the hatchet.

Walden is not happy about Billy’s arrival, judging from the photos we’ve seen. Rumour has it that after the former partners, who started their business in Bridget’s garage, sold it for billions, Billy went off the deep end, causing his breakup with Walden.

We will be live blogging the show with all the up-to-the-minute details at 9PM EST so make sure to come back to this spot and watch the show with us. Make sure to refresh often to get the most current update! While you wait for the recap you can watch a sneak peek video and read some spoilers of the episode here!

RECAP: Walden is looking for Berta, he needs dental floss. Alan being the “soldier against gingivitis” has many different flavors in his pocket.

Walden is on computer video talk with Bridgett, she tells him that Billy called and has a business proposition for him. Walden is upset and doesn’t understand why Billy wants to speak to him, he tells Bridget to convey to Billy that the answer is no.

Walden goes out on the terrace, let’s out a blood curdling scream which makes Alan drop some dishes in the kitchen. Alan asks Walden what is wrong, he confides in Alan that his former business went crazy. He plays a YouTube video that Billy did against Walden, it seems that Billy never wanted to sell the internet company. Alan calls Billy an idiot, if Walden threw a couple of million at him, he would give him a tongue bath. Seriously, he would lick him all over.

Someone is at the door, Alan opens it up, it’s Billy. Alan introduces himself as the gatekeeper, Billy tells him he has this billion dollar idea that he would like to share with Walden. Alan accepts a bribe of $50, then heads up to get Walden.

Walden is furious when he finds out that Alan let Billy in the house, but Alan tells him he did it because he was excited about Billy’s billion dollar idea. Walden heads down stairs and tells Billy he looks good without the crack pipe and Billy tells him that he looks good without the beard. They discuss the billion dollar idea, but Walden wants an apology first that he records on his cell phone. Billy jumps Walden, they end up on the couch, then Alan jumps on top of them. Jake arrives home, sees all three of them on the couch and says “I’m too old for this crap” and walks out.

Billy and Walden finally come to some sort of agreement, then later Alan heads to a bar and tells the girl behind the bar that he has no real friends, but then he heads over to Berta’s house and brings her soup. Berta is puzzled as to why Alan is there and he says it’s because they are friends. The doorbell rings, Berta hands a package to someone at the door, they hand over money to her. Berta asks her new friend, Alan, to drop off the money to someone who she owes it to. Alan does as she asks and I’m guessing it wasn’t the right amount cause Alan comes running out, get’s in his car and is shot at.

Billy and Walden are working together and popping energy drinks. Billy and Walden run to the terrace and they both pee together over it, Walden says that sometimes peeing is better than sex. Billy confesses to Walden that he is sleeping with Bridget.

Alan is back home, Walden and Billy are done and ready to test the first module. Billy tells Walden to go first since he is banging his ex-wife all the while she keeps telling him about Walden’s python. Walden goes ahead with the test and it works, first they turn off all the lights in Florida, then Canada, then the rest of the USA.

That’s it for tonight, what did you think of the episode? I loved when Alan dropped off the money and got shot at, hilarious!