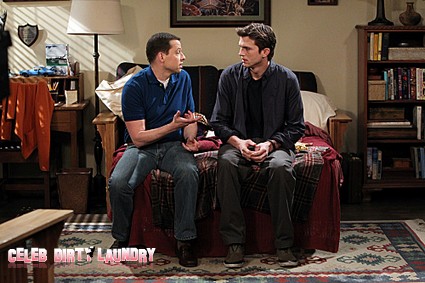 Are you ready for a whole new episode of Two and A Half Men and Walden tonight?  Tonight on CBS episode 17 of the show called ‘Not In My Mouth’ airs  On last week’s show Walden told the truth about not really have sex when Zoey when she was doing all that moaning the night before, but the best part of the show for me was when Alan told Walden that he had the best sex of his life! Alan hasn’t changed much since Charlie died, right?  If you missed the episode you can read our official recap here!

On tonight’s episode strained relationships and girl-fighting result when a huge storm traps Walden, Alan, Zoey and Lyndsey in the house on Valentine’s Day. Not only are Walden and Zoey in trouble but so are Alan and Lyndsey. Apparently, a ‘near death’ experience causes Walden and Zoey’s relationship to suffer, I’m surprised that Zoey’s lack of interest in her sex life with Walden didn’t cause it first.

I agree with Charlie – the show sucks and Ashton Kutcher is horrible as Walden.   What do you think are you starting to warm up to show?  Sound out in the comments below.

We will be live blogging the show with all the up-to-the-minute details at 9PM EST so make sure to come back to this spot and watch the show with us.  Make sure to refresh often to get the most current update!  While you wait for the recap you can watch a sneak peek video and read some spoilers of the episode here!

RECAP: Zoey and Walden are in a plane, he leans over to kiss her and the plane starts going down. Walden tells her he loves her and she says she doesn’t want to die. Walden is shocked, he professed his love to Zoey and she didn’t do the same thing in return.

Lyndsey is with Alan, she is on her second bottle of wine and he wants her to slow down a bit. Walden walks in and Lyndsey offers him wine, he refuses because he doesn’t want any when he is depressed. Walden tells them that he professed his love to Zoey and she didn’t return it. Alan feels bad for Walden and tries to get Lyndsey to tell him that she loves him, but she won’t until he does and tells him she can wait as long as he does to say it.

The next day, Walden tells Alan that he thinks he should probably break up with Zoey. Meanwhile, Lyndsey is in the bathroom throwing up. Zoey is going to England for a few weeks and Walden doesn’t want to leave things the way they are. Both are trying to talk and and Lyndsey keeps making these insanely rude noises while vomiting, ugh.

Walden goes over to Zoey’s house and her ex, Nigel, is there and he says “delightful” when he answers the door, which Walden replies “disgusting”. Walden is alone with Zoey, he confronts her and wants an answer on if she loves him or not. She doesn’t answer and he goes to leave, he is done with relationships, until of course when he meets a blond in a tight red dress in the elevator.

Alan’s son, Jake, asks him for $75 to buy the new Call of Duty when Berta walks in and asks who ate clam chowder last night, Alan tells her it was Lyndsey and she vomited all over the bathroom.

Walden walks in with Jennifer, the blond from the elevator. Alan goes to talk to Walden alone, he is shocked that he found a girl so soon, he only left the house an hour ago. Jake is alone in the kitchen with Jennifer, she tells him that she is 24, he tells her that he is 24 1/2.

Zoey calls Walden on a video chat on his cell phone, she realizes that the reason that she hasn’t said the ‘L’ word to him, is because she is afraid that something bad will happen. So she is superstitious about saying it to him, but it doesn’t mean that she doesn’t feel that way about him. Jennifer walks into the bedroom and Zoey sees her, awkward, Zoey hangs up.

Alan is in the bathroom cleaning up, Walden walks in and almost vomits from the site of it. They both get out of the bathroom and Walden tells Alan that he has to fly to London and beg Zoey for forgiveness and needs him as a witness. Alan tells him that he promised to bring Lyndsey out for a romantic dinner, Walden tells him to bring her along.

Jake is alone with Jennifer, he offers her a beer and tells her to forget about Walden and concentrate on them. Meanwhile, in the plane, Lyndsey is already drunk and making an ass out of herself – she vomits on Alan, then on Walden. When Alan goes to get towels, he slips in the vomit and all you can hear is screaming and crying in the plane. In London, Alan tells Zoey that Jennifer meant nothing to Walden. Zoey calls Jennifer “the whore from the seventh floor”. Walden apologizes for putting pressure on Zoey by telling her that he loves her and just as he is set to leave, Zoey tells him that she loves him. Walden runs to Zoey’s side and kisses her. Alan and Lyndsey look on and Alan turns to her and tells her he loves her, Lyndsey confesses that she loves him to. The seal it with a kiss and Lyndsey vomits in Alan’s mouth.

Jake is in his bathrobe and is telling his friend on his cell phone that he made out with Jennifer five times, the best half hour of his life!

That’s it for tonight’s episode, what did you think of it? It was a little too disgusting for my taste.