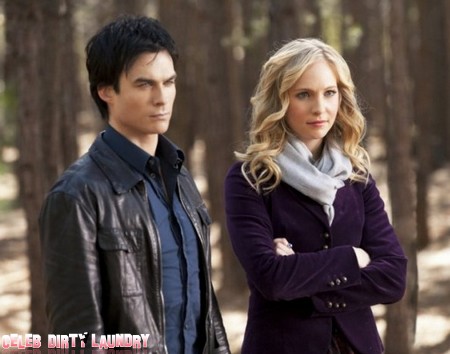 A whole new episode of The Vampire Diaries returns tonight and it is called ‘The Murder of One.’  Stand by as we live blog the show with all the up-to-the-minute details.  On last week’s show Damon met Sage again at the ceremony to kick-off the restoration of Wickery Bridge.  Damon tried to enlist Sage’s help to find out what Rebekah was up to.

Abby’s Mom was having problems with her transition to a vampire even though Caroline tried to help her.  We also learned a lot more about Alaric.  At the end of the show even though Sage betrayed Damon – Damon finds a way to kill the Originals.  The episode was exciting and if you missed it you can read our full recap here!

On tonight’s show Damon and Stefan focus a new project that will bring them closer to destroying Klaus, and they quickly bring Elena, Caroline and Matt in on the plan. After Klaus threatens someone close to Bonnie, she has no choice but to work on the spell he needs.

Meanwhile, Klaus and Rebekah find the perfect motivator to convince Finn to cooperate with them, but Rebekah is more interested in her own brutal plan to take revenge on Damon. Stefan’s emotional turmoil leads him to a dangerous confrontation with Klaus and, later, to a heartbreaking moment with Elena.

The show airs at 8PM tonight on Fox and we will be live blogging it will all the up-to-the-minutes. So come back to this spot and spend the evening with us enjoying the show! Make sure to refresh often to get the most current update! While you wait for the recap check out a sneak peek video of tonight’s episode HERE

TONIGHT’S RECAP:  Damon goes to see Elena and she asks how Alaric is – Damon assures her Alaric is fine.  Elena gives something she made for Alaric.

Stephen and Alaric are making stakes from the Wickery Bridge sign.  If you remember the end of last week’s show the sign is made out of the white ash tree that can kill an original.

Alaric wants to turn himself in to the sheriff but Damon does not want him to. Damon gives him his ring and Alaric does not want it because the ring is what made him kill people. Damon tells him they are going Vampire hunting and he needs the ring. They can kill some originals!

Matt, Elena and Caroline are meeting Stephen and Damon – the blood brothers tell them they have a weapon that can kill Klaus and show them the stakes made out of the Wickery Bridge sign.

Klaus meets with Finn and wants to know where their mother is. Klaus needs Finn’s help but Finn tells him to get lost. Klaus wants Finn to come to Mystic Falls because he has a witch that can break the spell his mother put on them that linked them terminally together. Finn refuses – and then Rebekah shows up and tries to convince Finn to go – Klaus throws Finn into a wall and tells him that he is not taking them all down and knocks them out.

Elena, Caroline, Damon, Stefan and Matt are practicing how they are going to kill Klaus. Damon warns Elena that there can be no last feelings of pity. Stefan tells the group they have 12 stakes and 12 chances to kill an original.

Klaus takes Finn into the house and he still refuses to help them. Klaus tells him he will be able to get him to help. Finn looks up the stairs and Sage is there – love conquers all! Finn goes to meet her and hugs her. Rebekah tells Klaus she is going to see Damon to get retribution on what he did to her.

Damon and Stefan are in the house and they hear something fall down the stairs – Damon goes over and sees it is Alaric on the ground. He looks up and it is Rebekah! She stabs him with a knife and says ‘Hello Love.’

Elena calls Bonnie – she is worried about her and thinks it is weird that she is not returning her calls. Matt asks if it is weird that Finn is in the middle of town square. Elena tells Matt he is supposed to have left town. Sage and Finn are walking and Sage tells Finn she never stopped loving him and she does not want to see him die.

Elena calls Stefan and tells him that Sage and Finn are in town square. She tells Stefan to get Damon – Stefan turns around and she sees Alaric on the ground and tells Elena they have a problem.

Rebekah has Damon and he is tied up by the arms. She is pissed at him and rips his shirt off and starts cutting him with a knife. He asks if she is trying to compel him to be her boyfriend. Klaus walks in and Rebekah asks him to leave her and go manage his witch.

Klaus has Bonnie and Klaus asks her to figure out the spell. Bonnie is not sure she is strong enough but Klaus is sure she is because she was the one who helped link Klaus and his siblings together. Klaus calls his brother Cole and it seems Cole is with Jeremy – and Klaus shows a picture to Bonnie to encourage her to figure out how to break the spell that bonds Klaus and his siblings together.

Damon is in a lot of pain and he is bleeding everywhere – Elena walks in and sees Damon hanging and he asks what she is doing there as Rebekah will kill her. He tells her to open the bindings on his hands carefully. She releases him and helps him get out – Damon is passing out. Damon tells her to go but Elena refuses to leave him. Elena gives Damon her wrist to drink some blood.

They almost kiss and we find out it is all a dream – Damon is still hung up. He calls Rebekah a bitch because he realizes she has been messing with his thoughts.

Damon cannot believe he hurt Rebekah that bad – but then he gets it – it is all because Klaus has bossed Rebekah around for 1,000 years so she is needy. Rebekah stabs Damon again and he screams and Bonnie hears and wants to know who it is.

Klaus won’t tell her but he does tell her he will hurt all the people she loves unless he helps her. He tells Bonnie he knows she needs all the blood of his siblings to do it. He takes his brother and sisters blood and drops it in a glass.

Sage and Finn are in a bar drinking and Stefan is watching. Bonnie is trying to do the spell that will release the originals.

Finn asks Sage how many people she has turned – and she tells him she lives life to the fullest. Finn does not seem to be pleased with Sage. They drink their drink and they spit out what they drank when they realize it contained vervain. The both walk out of the bar and Stefan attacks them.

Sage tells them Stefan he made a big mistake. Elena comes to help and Stefan stabs Finn. Finn is dying and Sage is crying. Finn goes up in smoke. It looks like Bonnie was able to break the spell because Klaus is still alive. Darn! Bonnie is SO USELESS!!!

Rebekah thanks Bonnie for what she has done. Bonnie sees Damon hanging and bleeding and she says ‘OMG.’ Klaus tells Bonnie that Damon pissed Rebekah off. Klaus tells Bonnie to go save and Damon and she turns around and says just take me home. So she does not save Damon. I hate Bonnie! What a Quisling.

Bonnie gets home and calls Elena and tells her that Klaus has Damon and it is bad. Elena tells Bonnie that is impossible because Klaus is dead but Bonnie tells Elena that she broke the spell and Klaus and his siblings are no longer linked. Elena asks where Damon is and she tells Elena that Damon is at Klaus’ mansion.

Bonnie breaks down sobbing and hangs up. Boo Hoo – Bonnie is in my bad books for life! Stefan tells Elena he is going to see Damon because he is not going to survive this. He leaves but then he comes slamming through the door – Sage has thrown him through it and she is furious at Stefan – she starts pounding him BUT… then she starts bleeding from the nose and Troy starts bleeding too. Then Sage and Troy die. Then Stefan realizes that Finn turned Sage and Sage turned Troy into a vampire so it seems all the line is dying. Then Elena realizes that this means all the vampires will die if all the originals die – since all current vamps are ‘descendants’ of an Original!!

Damon is still hanging bleeding and Stefan comes in with a bag – he tells Stefan he saw his rescue being much different in his head. Stefan calls for Klaus and Klaus comes out with Rebekah and tells them he wants to make a deal – 8 stakes made of white birch for his brother. Rebekah does not believe there is any white birch left but Stefan tells them he killed Finn. Klaus goes over and tells Damon to leave – Damon refuses and Klaus compels him to leave. Damon tries to yank his arms out of the bondage and yells.

Damon cannot get himself lose and is hurting himself – Klaus comes over when he realizes he can compel Damon and asks him what is the truth – how many stakes are there left and Damon tells Klaus 11. Klaus realizes Stefan lied earlier. Stefan goes after Klaus with a stake. Klaus tells him to step down or both he and Damon die.

Rebekah cannot believe Finn is dead and Klaus is glad he is dead – he says Finn was an embarrassment. Rebekah asks if he would say the same about her.
Klaus asks yes since she let the Salvatore brothers go with 2 stakes. Rebekah tells Klaus that Damon and Stefan would die for each other – at least they are a family. Klaus tells Rebekah that he is leaving once he gets the stakes, taking Elena, and making a new family. Rebekah asks what Klaus would think if she stayed and he tells her he would think she is just as pathetic as Finn.

Stefan realizes that Klaus is not worth it to hate – all the time and effort they put in and he is back at square 1 – they lost. Elena tells Stefan that she is better than Klaus she came back to the other side. Stefan lets Elena that he has been able to ignore everything that slipped away from him. Elena tells Stefan that she never stopped loving him. Stefan tells Elena that it is all his fault as he pushed her away. He tells her he loves her and knows she loves Damon too. She argues but Stefan tells Elena she wants him to look into his eyes and tell him she does not feel anything for Damon. Elena says ‘she does not know what she feels for Damon.’ Stefan leaves.

Damon comes to see Alaric and wants his stake and Alaric goes to get it and the stake is gone. Damon wants to know who he told – Alaric told no one and now he does not know where it is. Damon realizes that Alaric’s alter ego, the vampire hating one has a stake that can kill an original and perhaps Damon and his family.