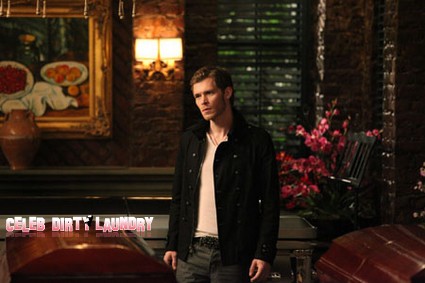 After a two week hiatus the Vampire Diaries returns tonight with a whole new episode called ‘Bringing Out The Dead.’  Stay tuned as we live blog the show with all the up-to-the-minute details.  Last we saw the show Bonnie believed her recurring dreams about Klaus’ coffins would tell her how he can be killed. The dreams also lead Bonnie to a reunion with her mother, Abby, whom Bonnie hasn’t seen for 15 years. Tyler turns to an unexpected ally in his quest to regain his free will.  If you missed the episode you can read our recap here!

On tonight’s show Sheriff Forbes delivers some disturbing news to Alaric and Elena  about the weapon used in a recent murder. In the Salvatore brothers’ escalating quest to kill Klaus, Stefan turns to Bonnie and Abby, while Damon reaches out to an old acquaintance for help in setting up an elaborate plan.

Intent on a plan of his own, Klaus hosts a strange dinner party, where he reveals another story from his family’s violent past until an unexpected guest brings the party to an end.   Meanwhile, Caroline is heartbroken when she is unable to stop a tragedy from unfolding.

Elena and Alaric are talking Alaric is hung over.  Sheriff Forbes comes to the door and tells her there is an unconventional conversation they have to have.  She tells Alaric it is a unconventional weapon the Medical Examiner was killed with.  The stake has Elena’s finger prints on it.  Damon thinks that perhaps Meridith did it because she saw Elena’s family weapons.  Elena says no it was not Meredith she refuses to believe Alaric has such bad luck with women.

Damon goes to meet Elijah and he tells Damon he found the note Damon left in his pocket.  The note  said come see me about killing your brother.  Damon asks Elijah if he has any idea about what killing item could be stored in the coffin they cannot open.

Stefan, Bonnie and her mother are going to the coffin that Stefan has.  Stefan wants her to open the coffin but she claims she has not enough power.  Stefan tells her he does not believe she has no power.  Elena shows up she needs to talk to Stefan.  Elena asks Stefan if he killed the Medical Examiner.  Stefan is insulted.

Caroline is hysterical. Elena says OMG Caroline he has vampire blood in his system.

Abby kept one Grimoire and they are trying to find a way to unbind the spell she put on the coffin to seal it.

Caroline is with her father he did not see who attacked him. Caroline tells her father she needs to get him some blood or he will die. Her father tells her that he is prepared to die.

Alaric is taking inventory of all the items in their arsenal. They suspect that Meredith stole the weapons and killed the people. Alaric tells Elena they would be idiots to ignore the facts. She feels bad for Alaric.

Damon & Stefan show up to see Klaus and Elijah. Stefan tells Klaus he did not want to come. Klaus invites them to eat and Stefan is not pleased. Klaus tells him he can either sit down and eat or he can pull his throat out. Stefan’s choice.

Damon says to Stefan, “I thought we agreed to leave the grumpy stuff at home.” Stefan tells Damon they don’t have to kiss Klaus’ ass all night.

Elijah asks Stefan where Elena is and Klaus tells Elijah better to ask Damon. Klaus asks Elijah whether they should tell the boys about Tattia an exquisite beauty. We find out both Klaus and Elijah loved her. Tattia’s mother put Tattia’s blood in the wine they drank when they both became vampires. Klaus and Elijah toast to Family Above All. Damon and Stefan look at each other sheepishly.

Bonnie and Abby are chanting a spell. Bonnie does not think her mother is trying – they have been trying for over one hour. Abby tells Bonnie the spirits are mad at her. Bonnie tells her it is not the spirits it is Abby who won’t open herself to it. Abby apologies to Bonnie, Bonnie tells her she could help her. They start chanting again. Something seems to be happening this time – it almost worked. Bonnie goes to call Damon and tell him they are getting close. Abby looks around she hears something – the coffin opens!

Bonnie texts Damon to tell him they need more time. Damon tells Klaus and Elijah that they will give them the coffin as long as Klaus and Elijah leave with the originals and leave them all alone, especially Elena without which he can’t make hybrids. Klaus tells them he will never leave the Doppelganger. He thinks eventually one of them will turn her into a vampire and that both Damon and Stefan are the worst thing for Elena. Damon goes out for air and Elijah follows him out. Klaus and Stefan stay and Klaus offers Stefan an after dinner drink of blood.

Matt walks Elena home – when they get to the house the electricity is off. They get flashlights and they see blood everywhere and blood handprints on the wall and windows and going up the stairs. They find Alaric at the top of the stairs with a knife stuck in him.

Alaric is alive and they ask who did it to him – he does not know. Alaric tells Elena that she has to kill him – if a supernatural kills him then he will come back to life. She picks up the dagger and stabs him to death.

Stefan tells Klaus he knows the only reason he called the meeting is to cause trouble between him and Damon. Damon walks in and asks Klaus what he offers. Klaus tells the boys he offers Elena’s future happiness. He tells the boys that Elena needs to marry a human man not them. Klaus tells them once they give the coffins up he will guarantee Elena’s safety for the rest of her life and of course he will access her blood… . Stefan goes and shakes his hand and says nice try Klaus but no deal. He takes Stefan’s hand and puts it in the fireplace – he tells Damon get the coffin or he will burn Stefan alive and he tells Elijah to go with him and when they get back he will give him their family as he promised.

Caroline and her father are talking – he is starting to feel week. He tells Caroline to call Steven when it is all over. Caroline tell him she know he thinks he made his choice, but he can change his mind. Caroline tells him he is strong enough to be a vampire. He tells her no becoming a vampire is against his beliefs. She asks him how he can hate what she is. He tells her she is good and she is exactly who he and her mother wanted her to grow up to be. She cries in his arms and asks her father not to leave her. Caroline’s mother watches and her Dad tells her this is what it is to be human.

Stefan tells Klaus to do it, burn him. He knows Klaus was not going to keep his word. He turns around and Elijah walks in and so does Cole, Rebekah and the other brother he killed and they stab Klaus. Klaus’ siblings are really pissed! Elijah tells Damon and Stefan they are free to go this is family business.

Caroline is crying her father is dead. Elena is with Alaric – he is still out. She tells Matt that Caroline’s Dad is dead. She asks Matt to stay with her until Alaric wakes up. She tells Matt she cannot lose any more family as she sobs.

Damon and Stefan are walking in the woods and he tells Damon that he was right about bringing Elijah back. Damon cannot believe he is admitting he is right. Stefan tells him he could have left him there and let him die. Damon says no way – not until I pay you back for all the times you saved me.

Stefan tells Damon he loves Elena and Damon responds that so does he.

Sheriff Forbes calls Elena and tells her it could not have been Meredith Fells who stabbed Alaric because she has been in surgery for the past 6 hours.

Damon and Stefan head to where Bonnie and Abby were and they find Bonnie knocked out but still alive and the coffin empty.

Rebekkah tells Klaus that they are leaving Klaus alone but first Rebekkah wants to kill Elena. Klaus tells them he is the hybrid and he has nothing to fear from them and Klaus says you will when we have what’s in the coffin. The door opens and a women walks in and Rebekkah says Mother. She walks over to Klaus and says look at me – she asks if he knows why she is there. Klaus says to kill me. She says Nicklaus you are my son and I am here to forgive you. She wants them to be a family again. OMG!