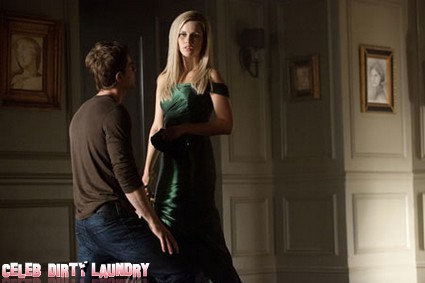 Our favorite television show The Vampire Diaries is back tonight with a whole new episode.  We will be live blogging the new episode “All My Children” with all the up-to-the-minute details tonight.  Last week was all about the fancy ball that Klaus and Elijah’s mother Esther held.  During the ball we learned that Esther is not pleased with her children and believes they are an abomination and wants them dead.  Whether she is being honest or not I am not sure.  What do you think?  If you missed last week’s episode you can read our official recap here!

On tonight’s show after starting her day with a startling discovery of Damon’s latest indiscretion with Rebekah, Elena is frustrated to find that none of her friends agree with her on how they should react to the Original family’s internal power struggle.  Once again caught up in the destiny of the Bennett witches, Bonnie and Abby find themselves playing a part in a ritual to appease the spirits of nature.

When Elijah gives Damon and Stefan a dangerous ultimatum that puts Elena in danger, they turn to Alaric and Meredith for help with a plan that leads them to a terrible choice.  It is a not to be missed episode!

TONIGHT’S RECAP:  Elena is sitting in bed and she decides to call Stefan who decides to ignore her calls.  Elena leaves a message and lets Stefan know she must speak to him.  Next on her list Elena calls Damon who is still in bed with Rebekah and is not nice to Elena and gets rid of her.

Elena heads over to Damon’s house to find out what he has been up-to and to her surprise she sees Rebekah and is not pleased.  She asks Damon what the heck he was thinking and he tells her he needs to move on with his life.  Elena lets Damon in on the news that Esther is planning to kill all her children.  She lets him know how all the kids including Klaus,Elijah and Rebekah are now linked together and will die together.

Meanwhile Rebekah gets home and her tryst with Damon.  All the brothers and sisters start arguing and Cole and Klaus decided they are going out for some fun.  Elijah tells Rebekah he does not completely trust what their mother Esther is up to.

Elena tells Bonnie about Esther’s privacy spell with sage.  Esther came to see Bonnie and Abby to introduce herself.   Bonnie and Abby will be helping Bonnie to make sure that Esther’s children will all be dead tonight which is a full moon.  Elena is still feeling bad that Elijah will be killed.

Elijah who Elena is already feeling guilty about shows up at Elena’s place he takes her to a place where he use to live 1,000 years ago.  He tells her about the people who use to live there and the history.  Finally he confronts her about the meeting she had with his mother and lets her know in no uncertain terms he knows she lied about it!  Elena finally fesses up and tells Elijah the truth and he realizes dear Mom wants to undo the evil she created.  He bangs on the ground, it opens up, he grabs Elena and they fall in together.

Stefan and Damon are freaking because they cannot find Elena.  Damon calls Alaric and he has not seen Elena either but does not seem overly worried.

Meanwhile Bonnie and he mother Abby are headed to meet up with Esther.  Esther wants to draw from their bloodline to help with her plan.

Poor Elena is lost in the tunnels and who does she bump into but Rebekah.  Of course Rebekah would like nothing more than to kill her.  Stefan and Damon are concerned and they go see Elijah and tell him they cannot find Elena.   The Salvatore boys find out that Elijah knows where Elena is and if they don’t help him kill his mother Esther then Elena will be killed.

Stefan and Damon are trying to come up with a plan to save all the kids from Esther plan and save Elena.  Elijah wants them to kill Esther, Bonnie and Abby and lets them know they only have till the full moon.  Pressure!

Caroline is still being pursued by Klaus – he wants her to give him a chance but Caroline is not buying it.  She finally agrees to sit down and talk to him but puts him on warning that she is too smart to fall for any of his tricks.

At the same time Esther, Abby and Bonnie are casting the spell and Esther’s son Flynn must sacrifice his own life for the whole plan to come together.

Cole is in the bar and harassing a girl and Alaric comes to the girls rescue and gets daggered.  Meredith tends to his wounds.

Stefan and Damon head to the Witch House because they are guessing that is where the spell is being cast.   Neither of them wants to do the killing because they know Elena will never forgive them so they flip a coin to find out who the lucky person will be.

The horrible Rebekah down in the tunnels with Elena throws gasoline on her.  She starts to light matches to push Elena closer to her.  Rebekah continues to light matches and Elena tries to tell Rebekah Esther’s plan.  She tries to explain to Rebekah that Esther has made her plan because she loves them.  Finally Elena gets fed up with Rebekah’s cat and mouse game and tells her she does not believe she will kill her because she likes torturing her too much.

Klaus, Elijah, and Cole find Esther and tell her to stop her plan.  Klaus tells her he will send her back to hell if she does not stop.  Esther tells them that they are an abomination, a curse on the Earth and she has no mercy for them at all.

Rebekah releases Elena – Elena wants to immediately go to Bonnie but Caroline stops her.  Abby is now transitioning into a vampire.  Caroline has to break the news to Elena who is devastated.

Damon and Stefan are at home and they are speaking and Stefan admits it has been a long time since he drank human blood.  Stefan wants to know why even though it was Stefan who won the coin toss and was suppose to kill Bonnie and Abby, Damon turned Abby into a vampire.

Damon admits that although he loves Elena he knows she loves Stefan more and he is better off being the bad guy.

When Elena returns home she finds a letter from Elijah.  In the letter he tells her that he feels bad about what happened and apologizes.

Rebekah comes home and Elijah lets her know how he feels about what happened with Elena and Esther. Rebekah tells Elijah that they deserve to live and he is not sure.  He tells her it was not Esther that made them monsters they did that to themselves.

While Rebekah was in the tunnels with Elena there was a cave she could not enter.  In the cave there was a map to a tree that could kill The Originals.  Rebekah feels they need to find the tree or be killed.

Alaric is at Meredith’s place and discovers that she has patient records there and oh no he discovers the knife she used to kill with.  Meredith comes up behind him and shoots him and says, ‘You were not suppose to find that!’

The show is on hiatus until March 15th. See you then!