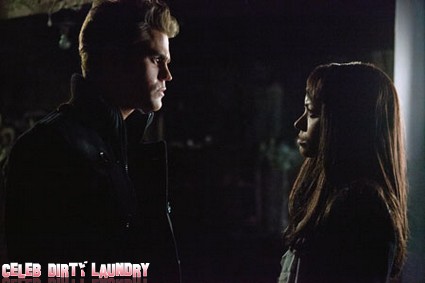 Tonight’s episode of the Vampire Diaries was all about the ball that Esther, Klaus and Elijah’s mother held.  A preview for The Vampire Diaries episode 15 has been released and it is called ‘All My Children.’   We have a sneak peek of the episode, some spoilers and several pics from the episode for your enjoyment.

Tonight’s episode we learned more about the Originals and about Esther.   Esther met with Elena and told her that she intends to kill all her children who are abominations.  She enlisted Elena’s aid to help her.  Because Klaus cannot be killed since he is a hybrid she planned to cast a spell to make her children as one.  Consequently, if she killed one they would all die.  To cast the spell she needed the Doppelgangers blood, hence why she needed Elena.  If you missed the episode you can read the recap here!

In next week’s episode after starting her day with a startling discovery of Damon’s (Ian Somerhalder) latest indiscretion, Elena (Nina Dobrev) is frustrated to find that none of her friends agree with her on how they should react to the Original family’s internal power struggle. Once again caught up in the destiny of the Bennett witches, Bonnie (Kat Graham) and Abby (guest star Persia White) find themselves playing a part in a ritual to appease the spirits of nature. When Elijah (guest star Daniel Gillies) gives Damon and Stefan (Paul Wesley) a dangerous ultimatum that puts Elena in danger, they turn to Alaric (Matt Davis) and Meredith (guest star Torrey Devitto) for help with a plan that leads them to a terrible choice.

In the preview video we see Elena running and Rebekah catches up with her and asks her, ‘going somewhere?’ We flash over to Stefan and he tells Bonnie that they took Elena.  There is another scene where Elijah tells Damon that he has to help them or Elena will die screaming in agony.  Whoops I think Esther’s children may have found out what she has been up too and what she is planning!  Rebekah tears some organ from something and throws it at Elena and then we hear Elijah’s voice say, ‘the choice is yours!’

‘All my Children’ airs on the CW on February 16th, 2012. Check out the preview video & the pictures below and let us know in the comments below what you think!  Are you enjoying the show?