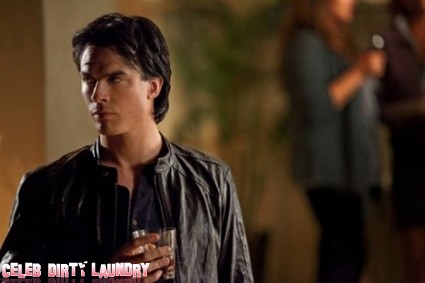 The Vampire Diaries returns to CW tonight with an all new episode.  This will be the 11th episode in the 3rd season and it is called ‘Our Town.’  We will be recapping the show with all the up-to-the-minute episodes, so stand by.  On Tonight’s show Caroline Forbes returns and is turning 18 and does not really want to celebrate! Aside from blowing out birthday candles, Caroline will be dealing with the fallout from her breakup with Tyler.

On last week’s show it was all about Klaus.  Stefan stole Klaus’ families coffins and Klaus wanted them back.  The long awaited first kiss between Elena and Damon happened. If you missed the episode you can read our official recap here and our wrap-up here!

Tonight’s episode synopsis: Although Caroline is in no mood to celebrate her 18th birthday, Elena, Bonnie and Matt surprise her with a small party in an unusual location. Damon and Stefan disagree on the best way to handle Klaus, and a reckless Stefan decides to test his theory by taking things to dangerous extremes. Bonnie is concerned when Elena tells her about Jeremy’s new plans. At a Founder’s meeting, Alaric once again runs into Dr. Fell (guest star Torrey Devitto), who is in the middle of an argument with her ex-boyfriend, the medical examiner (guest star David Colin Smith). Tyler refuses to go along with Klaus’ latest demand, and is surprised when Klaus seems to accept his decision. Wendey Stanzler directed the episode written by Rebecca Sonnenshine.

We will be covering the show live tonight with up-to-the-minute details as the show unfolds. So make sure to come back at 8PM EST for our recap. In the meantime while you wait – check out some photos of tonight’s show here and a sneak peek video and spoilers here.

Tonight’s Show: The show starts out tonight with an eye candy display: Damon in the shower and at the same time Elena is working out punching a punching bag.  Stefan comes to Damon’s house as he gets out of the shower to remind Damon he has to go to the witch house and he asks Damon why he is so happy.

Alaric tells Elena that Damon’s compelling worked and Jeremy is excited to leave and start a new life.

Bonnie is at the witch’s house and chanting spells on the coffins and she hears something.  Damon and Stefan are walking up to the witch house and Damon hears something too.  Damon goes in the house and signals Bonnie to not say anything.  Stefan walks to the house and a hybrid comes out confronting Stefan – and Damon comes behind him and pulls his heart out and kills him.  The boys are back in town!

Over at the witch house Damon is using a shovel trying to get the locked coffin open with no success.  Damon is trying to figure out who is in the locked coffin and he is pissed the witches will not help them get it open.  Stefan tells Damon he wants to tell Klaus that he has to do what he wants or he will drop his family to the bottom of the ocean.  Stefan wants to call Klaus’ bluff, but Damon is worried about the consequences.

Bonnie goes to see Jeremy and asks if he was going to say goodbye to her.  Jeremy tells Bonnie he thinks he will have a better life in Denver – just what he was compelled to think.

Caroline is back, Tyler sees her drive up and she tells him she cannot talk to him.  Caroline tells him he almost killed Jeremy and she does not understand.  Tyler tells her he wants to  put her first before anyone but he cannot he will never be able to because Klaus sired him and therefore comes first with him.  He apologizes and she tells Tyler she is sorry to.  Tyler gives her a birthday present, a silver bracelet.

Klaus calls Tyler and tells him he needs him to help him deal with Stefan.  Klaus tells Tyler he wants him to bite Caroline and Tyler refuses because it will kill Caroline – hybrid bites kill vamps.  Klaus tells him okay, he is disappointed but he will find another way to strike at Stefan.

Damon is telling Alaric that Stefan is going for broke and he is worried because he does not know how far Stefan will go.

Elena, Bonnie, Matt and Caroline are heading to the cemetery.  Elena tells them Caroline does not need a birthday she needs a funeral, she needs to end her old life to start her new life.  The give her a cake and tell her she needs to move forward and so do they.  Bonnie lights the candles on the cake with magic.  Caroline makes a wish.

At a fundraiser Alaric and Damon are talking and Alaric tells Damon something is up with Elena and Damon says it starts with a Stef and ends with an ‘N.’  He goes to get a drink and Dr. Fells comes over to see Alaric.  She mentions that she knows Mystic Falls has a vampire problem which surprises Alaric.

At the party Caroline sends Tyler a text message.  Bonnie tells Elena that she thinks it was really wrong to compel Jeremy to leave town, she feels Jeremy’s choice should not have been taken away.  Bonnie leaves the funeral.
Liz tells Damon she is not going to let people get hurt in a pissing contest between a hybrid and a vampire.  Alaric seems a man (Brian) roughing up Dr. Fell and Alaric comes over to save her.  He tells Alaric Dr. Fell is not what he thinks.  Dr. Fells get a call and tells Alaric duty calls and thanks him for the hero moment.

Stefan comes to the fund raiser and picks up a knife as he walks in.  He goes upstairs and is about to cut off the head of a hybrid and Damon stops him.  Stefan tells Damon that Klaus did not listen to him so he is going to kill the hybrids.  He tells Damon to defeat the villains you have to be the better villain.

At the party Tyler hears Caroline, Elena and Matt having fun and he asks to speak to Caroline in private. He tells her it is important. Elena asks Matt if he is okay and he tells her he just wants Caroline to be happy. Elena tells Matt that Bonnie is right she had no right to mess in Jeremy’s head. She tells Matt Jeremy is in danger and she needs to save him.

Tyler tells Caroline he takes it all back he can protect her from Klaus. He tells Caroline he loves her and he is not moving on. They kiss and starts to make out and Tyler bites her – accidentally or so it appears. Caroline is shocked and Tyler is surprised and he apologizes he did not mean to do it. Of course this is a death sentence for Caroline.

Matt and Elena go searching for Caroline and cannot find her all of a sudden Stefan shows up throws Matt to the ground, knocks him out and puts his hands over Elena’s mouth to quiet her.

Stefan is driving with kidnapped Elena and Damon calls and he tells Damon that Elena is busy and then he asks Damon what Klaus is going to do if he cannot make another hybrid? Of course it takes the doppelgangers blood to make hybrids and Elena is the doppelganger! No Elena – no more hybrids.

Damon takes Klaus into a room and tells him that Stefan took Elena. Klaus tells Damon that he will never kill Elena. Damon says he is not so sure… and asks Klaus to get rid of the hybrids to calm Stef and save Elena.
Matt found Caroline and he brings her to her mother Liz and tells her that Tyle bit her. Caroline is really sick already.

Elena asks Stefan what he is going to do? Lock her in a cave… and Stefan tells her he may change her into a vampire. Klaus calls and Stefan tells him he just fed Elena his blood ( he does!) and he is driving her off Whitney bridge (where her parents died) and he is going to kill her and turn her into a vampire. Elena starts to scream as the car heads down the road at breakneck speed. Klaus screams you win as Elena screams. At the last moment Stefan puts on the breaks.

Elena gets out of the car she is crying she asks him how he could do what he did. Her parents died at the bridge, Stefan tells him Klaus backed down he has a weakness and Stefan knows what it is. Stefan tells her all he has is destroying Klaus. Elena tells him he had her and Stefan replies he lost her when he left town with Klaus and he does not care what she thinks anymore.

Klaus shows up at Matt’s house and says that Tyler came to visit and said that he had bit Caroline by mistake. Klaus offers his blood but Liz is suspicious. Klaus comes in and Caroline asks if he is going to kill her and Klaus says on her birthday, does she think that low of him. Caroline replies, yes. Klaus looks at the wound and apologizes and tells her she is collateral damage.

Caroline tells Klaus she is dying and Klaus tells her he could let her die if that is what she wants, if she really believes her existence has no meaning. He tells her he will let her in on a secret that there is a whole world waiting for her and she could have it all. He tells her she could have 1,000 birthdays all she has is ask. Caroline tells him she does not want to die. Klaus offers her his wrist and she drinks his blood. Hybrid city here we come!

Elena is saying goodbye to Jeremy and she is hugging him and he tells her he has to go Alaric is waiting. Bonnie comes in and tells Jeremy she has come to say goodbye to him and hugs him.

Caroline is in bed and the wound has healed. She notices a box on her bedside table and it says from Klaus. She opens the box and there is a silver bracelet in it for her birthday.

Elena is on the bridge looking over and Matt comes and he asks if she is going to jump. Elena tells Matt she feels stuck she has been holding on to the girl who should have died with her parents. Matt tells her it is okay if she lets that girl go. Matt give her his two cents as a ‘guy who knew the other girl,’ he tells Elena she is doing better than she thinks. He picks up some flowers and says hear lies Elena Gilbert an amazing girlfriend and friend and he throws them over the bridge. Signifying the rebirth of Elena.

Alaric sits down next to Dr. Fell at the bar and she says she had a bad day – she lost a patient – he says he had to put someone on a plane (referring to Jeremy of course)

Liz takes Damon into the woods and shows him Brian Walker the Medical Examiner who has been staked. Damon says he was not a vampire and Liz says no he was murdered… .