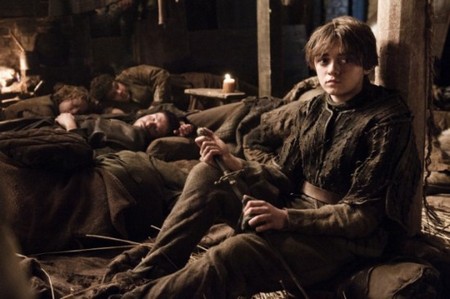 HBO’s hit show Game of Thrones returns tonight with a whole new episode called ‘What Is Dead May Never Die.’  This is a saying in the faith of the Drowned God on the Iron Islands. The answer to the phrase is “But rises again harder and stronger.”  Stand by as we live blog the episode with the up-to-the-minute details.

On last week’s show Stannis used Ser Davos to seek out new allies for his war with the Lannisters.  Davos elisted Salladhor Saan, a pirate, to join forces with Stannis and Melisandre for a naval invasion of Kings Landing.  On the road north, Arya confides in a Night Watch recruit, Gendry.  If you missed the episode you can read our full recap here!

On tonight’s show at the Red Keep, Tyrion plots three alliances through the promise of marriage. Catelyn arrives in the Stormlands to forge an alliance of her own. But King Renly, his new wife Margaery and her brother Loras Tyrell have other plans.   At Winterfell, Luwin tries to decipher Bran’s dreams as Bran’s dreams continue to trouble him.

Tonight’s Show:  Tonight show opens with Crastor coming back and throwing everyone out of his home.  He brings Jon Snow with him.  The ranger learns the truth of Craster’s household and he is abhorred that Crastor is killing all the boys.  He realizes that the head of the Night Watch knew.  He tells Jon the boys are the offered to the Gods.  He tells Jon they have other wars to fight and and like it or not they need men like Crastor her.  He doesn’t want them to lose sight of the mission.

The head of the night watch tells Jon to get his horse and tells him they leave at dawn.   Samwell comes over to Gilly and gives her a thimble from his mother.  It is the only thing he has from his mother and he gives it to her.  He tells her to keep it safe for him until he comes back.

Bran is still having bad dreams and tells Luwin about them.   Bran is believing his dreams maybe true but Luwin tells him they are dreams and they are not true.  Bran is convinced that his dreams are true because he dreamt his father was going to die.

Luwin tells Bran maybe one day there was magic but magic is gone and the dragons are dead.

Catelyn Stark has arrived at Renly Baratheon camp and Renly and his new wife Margarey are watching two men fight.  Margarey seems to be enjoying the fight.  Brienne of Tarth wins the dual in which he asked for the winning is a place in the king’s guard. She is granted her request.

Catelyn Stark is introduced to Renly and his wife Margarey and they welcome her.  Renly promises Kaitlyn that he will see that people will answer for her husband’s death. He tells her when he takes Kings Landing she will have the Joffrey head.

Catelyn is trying to persuade the younger Baratheon Renly to broker a peace with his elder brother, Stannis. If such a peace can be achieved, then the Baratheons can help the Starks fight the real enemy: the Lannisters.

Catelyn congratulates Brienne that she fought well for her King today.

Theon Greyjoy sister Yara comes up to her and he is pissed.  She says he is pissed just because he did not recognize her.

His father thinks the North is ripe for the taking.  The elder Greyjoy lays out his plan to Theon and Yara and his goals are lofty.  Yara is going to take 30 boats to launch an attack and Theon is only given one boat to fight fishermen.  Theon tells his father Rob Stark will not  give up as easy as they thin.   Theon tries to convince his father that it might be better to ally with Robb Stark than to go against them.  His father tells him his time with the wolf has made him week.  Theon tells his father she gave him away. Now he feels his father curses him because he has come home.

Yara is just because she feels Theon would have her father bow down to his other family. She tells him to make his decision quick because they’re ships are going to sail.

Shae tells him she is not a kitchen wench.

Marsalla asks Sansa when she will be marrying Joffrey.  Cerseil tells to her son if Joffrey kills France’s brother she will still marry Joffrey.  Shae comes to visit Sansa and tells her she is her new hand lady.  Fans at did not know she was getting a new hand lady.  Shae does not know what to do and Sansa tells her she should know.  Sansa asks her if she has ever been a hand lady before.  Sansa tells her hand ladies wait on ladies and she does not have time to answer a 1000 questions and teach her how to do her job.  She asks Shae to brush her hair.

Tyrion tells a member of the Small Council the Grand Maester Pycelle that it is perilous times and he realizes that these times much be fixed with Matrimony and he says that Queen Cerseil cannot know is plans.  He tells Pycelle that Princess Marsala will be wed and sent away to Dorn.  He tells him the Queen must not know that he plans to marry Princess Marsala off to Theon Greyjoy.  Theon’s father loathes the Starks and he intends to have Theon’s father’s ships.

Cersei gets wind of Tyrion’s schemes she lashes out, threatening him with the fact that none of them are really safe in their positions.  She tells him he won’t get away with it.  Tyrion tells her it is done and she cannot stop it. He asked her how safe does she think Marsala is? She tells him to get out.

Theon is writing to Robb Stark whom he considers a brother. He thinks better of it and he burns the letter.  Theon is being born again as a son of Greyjoy.

Since Tyrion told two people different stories he realizes he was betrayed by a member of the small council Grand Maester Pycelle.  He realizes that he was spying for his sister Cerseil.  Tyrion wants to know how many hands he has betrayed.  Tyrion tells the guards to take him to one of the black cells.

Varys tells Tyrion that Shae is doing well working with Sansa.  Tyrion tells Varys he has no intention to follow Ned Stark to the grave.

Arya’s journey north is interrupted once again by Joffrey’s soldiers, but this encounter proves far more damaging than the previous one.  Balon tells Gendry and Arya to run if it gets bad.   The guards arrive and they want the bastard boy.   They tell Balon to drop his weapons and a huge fight ensues.  The soldiers kill Balon and as Arya runs she sees the cage with the men in it on fire.  They scream for her help and she brings them a hatchet to help them.  A soldier catches Arya as she is running.  They round up the children and tell them they are looking for a bastard called Gendry.  If they do not give him up they will take the children’s eyeballs out.  Arya tells the guards they already found Gendry and points to a dead boy on the ground.

Of course it is not Gendry but they believe her because Gendry’s helmet is on the ground next to the dead boy!