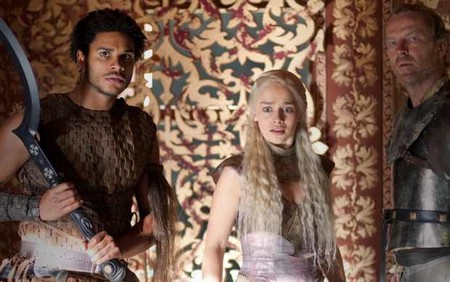 HBO’s hit show Game of Thrones returns tonight with the seventh episode of the second season called ‘A Man Without Honor.’  Nikolaj Coster-Waldau who plays Jaime Lannister said in an interview about tonight’s episode that this episode contains his “favorite scene ever” that he has shot for “any job.”   Stand by as we live blog tonight’s episode with the up-to-the-minute details.

On last week’s show Theon completed his master stroke. In King’s Landing, the Lannisters sent Myrcella from harm’s way in the nick of time.  Arya comes face to face with a surprise visitor; Dany vows to take what is hers; Robb and Catelyn receive crucial news; Qhorin gives Jon a chance to prove himself. Joffrey meets his subjects.

The question on everyone’s mind at the end of last week’s episode was, ‘Who took Dany’s dragons?’  My guess is Pyat Pree,  what do you think?  Hit the comments and let us know! If you missed the episode you can read our full and detailed recap here!

On tonight’s show Jaime meets a distant relative; Dany receives an invitation to the House of the Undying; Theon leads a search party; Jon loses his way in the wilderness; Cersei counsels Sansa.  In the preview for this week’s show Dany asks Ser Jorah if it is he she should trust and and he asks her to forgive him.  She then she tells him to find her dragons.  I would look to Pyat Pree.

Tonight’s Episode: Tonight’s show opens with Theon waking up and finding that Osha is gone.  Theon is upset because his guards that Bran Stark, Hodor and Osha escape.  Theon tells his men to get the horses of the hounds.

He comes upon Maester Luwin and he tells him if he finds Bran soon enough he will not  kill him. Maester Luwin tells Theon that he is more valuable alive than dead.  Theon tells Maester Luwin that the hounds have a scent.

Bran, Hodor and Osha are walking.  Osha tells them they have to keep going because they can’t outrun hounds forever.

Jon Snow is lying on the ground with Ygritte.   He gets her up and tells her they have to move.  Ygritte asks Jon how old is?  Ygritte mocks him and tells him he is the boy who never slept with a woman.

Jon ties her around the waist and pulls her.  Ygritte says Jon – she heard of men don’t use their balls they swell up.  He tells to shut up.  She tells him she is a free woman.  She tells them he’s swore some stupid oath that he can’t touch a woman.

Tywin is smelling wolfbane – he says it was no simple assassination.  Tywin thinks the assassin was trying to kill him and he wants to find out who was.  Arya brings food for Tywin and he tells her he does not like mutton.  He tells the soldier that he should let the people know what happens when they choose the wrong side.

Tywin tells Arya to eat, she says she will in the kitchen but he tells her it’s bad manners – sit down and eat.  Tywin tells Arya this will be his last war win or loose. He has never lost the war and this is the one he will be remembered for. He tells her they are calling it the war of Five Kings and his legacy will be made from it. He tells her legacy is what you pass on to your children and your children’s children, it’s what remains of you when you’re gone.

Tywin tells her that Harrenhal was destroyed by the dragons.  Arya impresses Tywin with her knowledge of history.  Tywin tells Arya that she reminds him of his daughter.  He asks where she learned everything and she tells him from her father.

Tywin is surprised his father as a stonemason was so well read.  Tywin figures out quickly that Arya is not a commoner but she claims her mother use to serve a lord.

Sansa comes to see Sandor he tells her he doesn’t need thanks for scaring away dogs.  Sandor tells her killing is the sweetest thing you can do.  Sansa asked why he is so hateful, antisocial, because he is so hateful when they say she is Queen.

Xaro tells Danys that is called a meeting of the 13.  Xaro tells her he did not take her dragons, they are useless without her.  Xaro cannot let this thing happen to her under his roof.  Daenerys is very upset.

Ygritte and Jon are still together.  She tells Jon he can be a free man too.  She could show him how. She tells him girls would claw there eyes out to get near him.  she tells him she could teach them how to do it. He says he already knows how to do it and she responds that he knows nothing.

At the camp with Robb Stark – Ceril is talking to Robb and he tells him that his sister Cersei tore the the paper that he brought to her.

Talia comes to see Robb – she tells him she’s been treating his wounded men.  She is already run through the supplies she brought with her. She tells Robb she needs silk for stitching, fennel bark and other supplies.  She tells Robb she knows where to find the stuff. They are riding to the Craig to negotiate a surrender and he could get what she needs there. He asked her to come with her to the Craig and she can get all the supplies she needs there.

Theon’s hounds have lost Bran Stark’s scent and he is furious. He says he will look like a fool unless he finds them.  The first mate finds a clue where they are and Theon asks his men to bring Maester Luwin back to Winterfell.  He begs Theon not to do what he intends to do.

Jorah Mormont comes to see Daenerys and she is upset. He feels he should not have left her alone, he should have stayed by her side.  Jorah tells him to trust her, she tells him she doesn’t need trust anymore. He puts his hand on her shoulder and she tells him he’s too familiar. He tells her no one survive in this world without help and he asks to help her. She tells to find her dragons.

Ygritte asks Jon how long it will take them to find the Night Watch.  Ygritte asked what they’re going to say about them.  Jon tells her there is no us.  Ygritte tells Jon she will tell everybody he slept with her.  She tells him since it is going to be her word against his he may as well have sex with her.  She tricks and pushes him and tells him he is dumb. She gets away.  He hears a whistle and he looks up and he is surrounded by Wildings.  Ygritte tells him he should have taken her when he had the chance.

Sansa is having a bad dream about when she was almost raped. She looks down at her legs and sees all the bruises.  She gets a knife and starts stabbing the bed.  Shae comes in and shows her the bed is full of blood, she has had her menstruation and now she can have children. Another servant comes in and Shae runs after her. She is going to go and tell Cersei but Shae tells her she better not.  Sandor is in Sansa’s room when Shae get back.

Cersei walks with Sansa and and explains what has happened. She tells Sansa now she can have children with the King.  She tells Sansa she may never love the King, but she will love his children.  Cersei shares wisdom with Sansa and she says, “the more people you love, the more trouble you have, love only her children”.  She asks if she should love Joffrey and Cersei tells her she can try.

Jaime Lannister is talking to a distant relative Alton and he tells Jaime he squired for him once.  He tells Jaime that day was the best day in his life and he will never forget it.  Jaime talks to Alton and becomes friendly with him.  Alton offers to help Jamie and Jamie tells him he has an idea how we can help. He tells Alton he will have to die. He brutally murders Alton.  When the guard comes in to see what is happening he attacks the guard.  Pure Jaimie!

Jorah come to visit the physic and he asks if she took the dragons.  She asks if Jorah will betray her again and he says the never. She tells him the thief they seek is with Danys now.  Dany’s and Xaro are meeting with 13.  The Spice King tells Dany if he had the dragons he would kill them.  Pyat Pree tells Danys he has the dragons.  He had the King of Qarth take the dragons for him.

Pyat Pree walks up to to Xaro and Danys and says she will be with her dragons and take care of them forever. Somebody comes up behind the 13 and murders all of them.  Jorah comes up behind Pyat and stabs him and another Pyat appears.

They have Jaime Lannister chained and are dragging him behind a horse.  They have found out he killed someone.  The man he killed has a father who wants his head.  Catelyn tells her he crippled her son too.  She tells him she is the mother of the King and he needs to stand down.  Jaimie thanks her for fighting on his behalf.  Catelyn tells them to take him to the stockade and gag him.

Tyrion warns Cersei that all of their actions have led to instability in the capital.  Cersei quotes their father and Tyrion tells him it is just Cersei, Joffrey and he there.  Cersei tells Tyrion she cannot control him.  Tyrion tells her ‘it is hard to put a crown on a dog.’

Cersei which he was born looking like Jamie but Tyrion tells her he is more like Robert.  Cersei says maybe this is their punishment.
Tyrion tells her at least two of her children are decent.
Brienne asks Catelyn Stark if her son returns at dawn.  She asks Catelyn if she wants to die defending a Lannister?
Catelyn goes to see Jaime Lannister and asks to be alone with him.  Catelyn tells Jaimie they want his head.  She tells him he strangled someone with his chains.  Jamie mocks Brienne and asks Catelyn where she found the beast.
Catelyn tells Jaime he has no honor.  Jaime tells her he slept with Cersei and has been faithful and the same cannot be said for Ned Stark her husband.  He says Ned slept with another women and had a child, Jon Snow.
Catelyn asks Brienne to give her the sword.
Theon is meeting with the people of Winterfell.  He warns them they they have a lord and they better serve him well – or else.  He points and his guards lift in the air two burnt and charred bodies.  One is clearly a child.  But are the two burned corpses who they are supposed to be?
Maester Luwin screams, NO!
The End!