BY Nicholas Sanford on May 27, 2012 | Comments: 2 comments
Related : Game of Thrones, Recap, Television 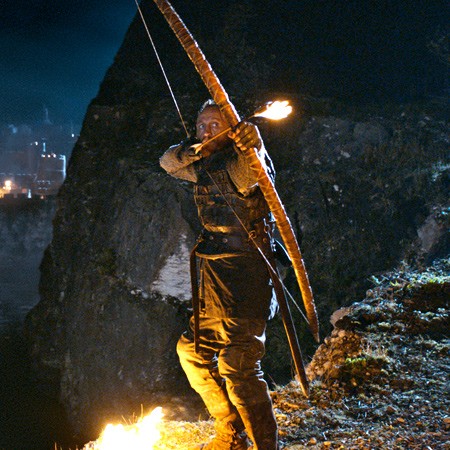 HBO’s hit show Game of Thrones returns tonight with the ninth episode of the second season called  ‘Blackwater.’ We only have two more episodes left of the season and we are finally going to see the big Battle of Blackwater. A whole bunch of exciting things will definitely go down, so stand by as we LIVE blog tonight’s episode with up-to-the-minute coverage.

Here’s a brief recap of last week’s episode: Theon holds down the fort at Winterfell and receives a visit from his sister, Yara, who wants him to come home.  She is worried about what Robb might do when he finds out that Theon has taken over Winterfell.  Robb was betrayed by his mother, Catelyn, who allowed Jamie Lannister to escape.  Catelyn believes Jamie can help her save her children, but Robb knows she has been fooled by Jamie.

Stannis and Davos approached their destination of Kings Landing and are only two days away.   Ygritte brought Jon Snow before her leader, the Lord of The Bones, as a prize.  Meanwhile, Arya convinces Jaqen to help her and her friends escape since he cannot perform her last wish fast enough.  If you missed this exciting episode you can read our full and detailed recap here.

I CAN’T WAIT to see what happens with the whole dragon egg situation. I’m quite eager to see what is inside the House of the Undying and learn more about these twisted, purple-eyed warlocks! What are you most excited for?

Again, we will be live blogging the episode at 6PM (PST)/9PM EST . . . so make sure to come back to this spot and watch the show with us.   Make sure to refresh often so you get the most current info!  While you wait for the episode you can catch a sneak peek of tonight’s episode BELOW!

The show opens with ships on a rough ocean. It is night time and all the crewmen are quiet; Stannis is meditating on his impending battles. The tides are against them, and we see people getting seasick, barfing their brains out in large barrel. Davos chats with his son, who, as we know, is strong in his faith and his insistence on the existence of the Lord of Light.

Next, we are taken to Tyrion’s bed, where he’s laying beside Shae. He admits to her that he is afraid of the upcoming battle. The two are clearly in love.

Queen Cersei is drinking wine and has a somewhat intense conversation with Maester Pycelle. He brings her a bottle of essence of nightshade, which, obviously, she’s planning on using to kill someone . . . any guesses? I’ll take a guess. Tyrion?

In the kingdom, the soldiers are having a pre-battle party when Sandor Clegane enters. He sits down at a bar table. “You think you’re a good hard man?” he says to Bronn. He critiques his and his soldiers’ carefree attitude. They confront each other; Bronn goes to grab his sword, but the kingdom’s alarm bell is run. “One more drink before the war, shall we?” Bronn asks. The two smirk.

Tyrion prepares for battle — a boy fits him with his armor — as he converses with the cunning, and extremely ambiguous, Varys. Tyrion alludes to Varys’s love in boys. Varys sidesteps this conversation and presents Tyrion with a map of the city, which details secret tunnels, passageways, etc. — if he found a need to escape. Tyrion assures Varys that he will not be running away from this battle. Varys tells Tyrion that Stannis has the company of the Red Priestess. Tyrion doesn’t know what this means and Varys asks him if he believes in the Old Powers. Tyrion, clearly, does not. Varys tells him to trust in people and trust in what people have seen, alluding to the fact that he’s encountered the other — the magic of the world. While Varys knows Tyrion probably doesn’t entirely trust him, Varys asks Tyrion if he’s ever told him how he was cut (he’s a eunuch) . . . he doesn’t elaborate, but I’m guessing his unfortunate accident was a result of some mystical/magicla/supernatural something-or-other. He tells Tyrion that he’s the only man that can stop Stannis.

We cut back to the ocean. The ships approach. The crew starts beating drums to signal their arrival. Stannis smiles.

Back in Kings Landing, everyone prepares for battle. Tyrion and Bronn wish each other luck and tell each other not to die in battle.

King Joffrey comes down to see Sansa. He tells her she should see him off. He asks her to kiss his sword. “Some of those boys will never come back,” says Shae as she watches the soldiers go off to battle. “The worst ones always do,” says Sansa, obviously talking about Joffrey.

King Joffrey approaches Tyrion, who appears to have a plan to thwart the impending army.

Queen Cersei heads to a safehouse and chats with Sansa. She asks her if her “red flower is still bleeding?” She nods. “How fitting,” she says, “men will bleed out there and you will bleed in here.”

On the wall, King Joffrey spots the ships. The troops mobilize. Soldiers, lining the wall, prepare their arrows. Tyrion urges them to stop. Kings Landing only sent one ship out into the ocean to confront Stannis’s army. There’s no one on board the ship. Stannis’s army gets nervous. The ship spills wild fire — the potion the Kings Landing alchemists concocted — into the ocean. A fire arrow is hurled into the night sky. The arrow lands in the water and in a fiery, green, epic, TOTALLY BADASS explosion, half of the fleet’s ships explode. Screams of the dying army fill the night sky.

Stannis’s ship is left unharmed. With half of his army destroyed, he prepares to land on the shore and “take the city.”

Back at the safehouse, Sansa prays that the gods will have mercy on everyone. Cercei (imma not so fond of this really mean queen!) asks her what on earth she’s doing . . . she also asks if she’s praying for her and her son Joffrey. Cercei is fed up with Sansa’s apparent “perfection” and tells her how her father told her not to believe in the gods, that they “have no mercy, that’s why they’re gods.” Cercei, who is obviously drunk, is borderline evil. She goes off on this monologue about how if the city falls all the women, highborn or not, will be raped and eventually killed.

Stannis’s army prepares to land in Kings Landing. The boats approach. Kings Landing unleashes a rain of flaming arrows, knocking out some the attackers. Some get past the first line of defense and prepare to breech the wall. We see The Hound fighting, and not it’s not long before Lancel gets speared in the shoulder. He lives, but he hobbles off.

We’re back at the safehouse. Cercei is still drunk and she comes across Shae, Sansa’s handmaiden and Tyrion’s lover. Lancel runs into the safehouse to tell Cercei everything that has happened on the battlefield. Cercei tells Lancel to go get the king and bring him to safety.

The battle continues and, as half of the King’s Guard falls, Sandor experiences a moment of defeat. Tyrion urges him to get back out there and fight, to return to the outside of the wall, but he says, “F**** the king” and storms back.

Lancel finds Joffrey. Tyrion encourages him to stay at the frontline, but he gladly accepts the invitation to return to his mother’s side. In an amazing turn of events, Tyrion steps up and says that he will lead the attack. Stannis’s army is at the gate — they’ve almost broken it down. Tyrion gives an amazingly inspirational speech, instilling courage and hope within the army. He has a plan: to go out a secret tunnel and attack them from behind. Shae tells Sansa to return to her chamber–for she’ll be safer there.

While in her chamber, Sansa comes across a doll. Sandor is in her room. He says that he’s going to go somewhere that “isn’t burning.” He says that he could take Sansa with him. He asks her if she wants to go home. She says that she’ll be safe there, that Stannis won’t hurt her. Sandor says that Stannis is a killer–that all men are killers–and she better get used to looking at them in the eyes.

Tyrion leads the troop outside of the wall. Stannis’s army is huge. Tyrion fights and, in a close call, his cheek is slashed. He falls to the ground and, by the end of the episode, we’re still unsure of his fate.

As the battle ensues and the bloodshed continues, we see Cercei sitting on the Iron Throne with her smallest son. She tells him a story about lions and wolves and kingship . . . she says that she will protect him from the evils in the world. She opens the bottle of nightshade *GASP* and prepares to give it to her son. While she tells the story, we see a new army approaching the battlefield on horses. It’s a Lannister army.

Just before Cercei can give her son the poison, her father, Tywin, storms in shouting, “The battle is over. WE HAVE WON!”

Wow, what an intense episode! If you watched the episode, what did you think? Lots of good, strong, solid HBO character development in this episode. What shocked you most? What didn’t surprise you? Let us know in the comments section below!