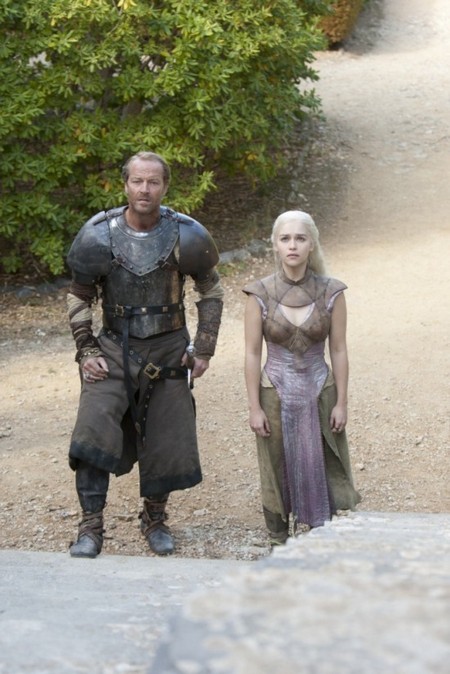 After 9 weeks of action and a fantastic second season, Game of Thrones comes to an end tonight with its season 2 finale and the episode is called ‘Valar Morghulis.’  The name of the finale episode Valar Morghulis is a common greeting in Braavos, meaning all men must die in High Valyrian. The customary response is Valar Dohaeris — all men must serve.  Stand by as we live blog the final episode of season 2 with all the exciting action!

Here’s a brief recap of last week’s episode: A massive battle ensued for control of King’s Landing and the Iron Throne.   It is the Battle of Blackwater Bay and Tyrion and the Lannisters fought for their lives as Stannis’s fleet assaulted King’s Landing.

As expected, Joffrey does not take the lead in the battle and ends up running back to his mother.  Tyrion leads the battle and his cheek was slashed. He fell to the ground and, by the end of the episode, we’re still unsure of his fate.  If you missed the episode you can read our full and detailed recap here!

On tonight’s episode Theon stirs his men to action as he awakens to a changed situation. Luwin offers some final advice. Brienne silences Jaime; Arya receives a gift from Jaqen ; Dany goes to a strange place and it looks like Jorah is really upset about Dany going. Jon finaly proves himself to Qhorin.  King Joffrey doles out rewards to his subjects and he proclaims Tywin Lannister as the saviour of Kings Landing.

Again, we will be live blogging the episode at 6PM (PST)/9PM EST . . . so make sure to come back to this spot and watch the show with us.   Make sure to refresh often so you get the most current info!  While you wait for the episode you can catch a sneak peek of tonight’s episode BELOW!

The show opens with Tyrion’s waking. He slowly opens his eyes. His head is bandaged and he learns that he is no longer hand of the king.

Tywin approaches Joffrey, who sits on the throne. Joffrey declares his grandfather as the “savior of the realm” and declares him hand of the king. Next, Joffrey summons Lord Balish and grants him the castle of Harrenhal. Loras Tyrell, after being asked what he can be awarded for his help in the battle, approaches the king and asks that they join the houses. Queen Cersei advises that Joffrey set Sansa aside and marry Sir Loras’s sister. Joffrey is uncertain at first, saying that he must keep his word — honor his vow. But after receiving counsel from a religious figure who says it would in fact be all right to seek Loras’s sister’s hand in marriage, he agrees to it. Sansa, who is just as confused as the hall, walks away. She’s happy, but then Lord Balish finds her and asks her if she really thinks Joffrey will just “let her walk away?”

Varys is in the brothel. He visits the prostitute that Joffrey beat and asks her if she’s satisfied with Lord Balish’s management. He tells her that he feels as if her talents are being wasted and that, unlike Lord Balish, he protects those who work for him. She asks him what she can do for him. Varys wants her to come work for him. “He scares me,” she says. Varys says that she has every right to be but, like all people, he has weaknesses. He hides them well, Varys says aloud. “But not that well,” he says finally.

Next we see Brienne leading Jaime. Jaime troubles Brienne, questioning her femininity. They come across three traveling people. They laugh at Brienne — a strong woman who carries a sword. One of the travelers identifies Brienne’s “Prisoner” as Jaime Lannister. She eventually kills them in order to protect her promise to Lady Catelyn. Brienne is a woman with incredible conviction and devotion, one who is bound by her word.

Robb talks with his mother about love and about marriage, in particular his future marriage arrangements.

Stannis argues with Melisandre. He fights with her, wondering why, if she’s been blessed with unnatural powers by the God of Light, she didn’t warn him about what would happen at the battle — the one they lost. He chokes her, asking her where “her god is now.” SHOW ME! SHOW ME! he says. WHERE’S YOUR GOD NOW? he says as he chokes the life from her. “Inside you,” she says. He releases her. He feels guilty for killing his brother. As she strokes his hair, she tells him that that’s not the only man he’ll betray. “This war has just begun. It will last for years,” she says. “Thousands of men will die at your command. You will betray those serving you. You will betray your family. You will betray everything you once held dear. And it will all be worth it, you are the son of fire — the warrior of light [. . . .] You will be king.” Stannis is unsettled by her certainty and makes it clear that no one really knows what will happen. Melisandre offers to SHOW HIM what will come to pass. She tells him to look into the fire. With Melisandre wrapped around his shoulders, Stannis looks, awestruck, into the fire and says . . . yes. Yes, he sees what will come to be.

Theon, still distressed by his current situation, converses with Maester Luwin. Maester Luwin says he serves Winterfell, and that now, by oath, he serves Theon. Luwin advises Theon to run, that he won’t be able to beat the 500 Northman encircling the walls of Winterfell. Theon says he can’t go home. Luwin tells him not to go home. He tells him to join the Night’s Watch. Theon considers this, but realizes he won’t make it to the wall. Luwin says that there are secret passages out of Winterfell. He advises him to use these to escape. He encourages him to seek homage in that honorable order . . . but he doesn’t seem too keen on the idea.

As the battle horns sound beyond the wall, Theon rallies the spirits of his twenty men. As he’s giving his speech, one of his soldiers knocks him out. The same soldier runs a spear through Luwin’s side. He falls to the ground.

Next, we’re back in Tyrion’s room. Varys chats with Tyrion about the current situation surrounding him — how he’s basically been made a pariah now that Twyin has returned. Varys leaves and Shae comes in. She removes his bandages, only to find a nasty scar across his face. Shae encourages him to leave King’s Landing with her — to sail to Pentos. He wants to go, but he says he can’t leave these “bad people.” He tells her that he thrives in this volatile environment and worries that she will leave him. She says, “You have a shit memory. I’ am yours, and you are mine.”

Next we travel all the way to Qarth where we see Daenerys, Jorah, and a soldier walk toward the House of the Undying. The soldier asks where the guards are. Jorah says that they kill with sorcery, not steel. Daenerys walks up the stairs to the front of the place and realizes that there are no front doors. She walks around in circles. Jorah follows her. Eventually, in what seems to be a trick of the mind, he loses her, and Daenerys winds up inside the House of the Undying. Daenerys grabs a torch and, at the sound of a screaming girl (maybe an illusion), she runs down a dark, rugged hall, one illuminated with only torches. . .

We leave Daenerys and see Arya and her band of escapees walking through the countryside. She finds herself in the path of Jaqen H’ghar and she asks him how she found them.. She asks him how she killed those guards. She wants to know how to kill like he does.He says if she wants to learn . . . to simply accompany him to Bravos. She says that she can’t, that she must find her family — her sister, mother, brothers. Jaqen understands and in his mysterious accent says, “Then we must part ways” and gives her a special coin. Upon handing it to her he tells Arya that if she ever needs to find him again, simply give that coin to any man from bravos and repeat the words VALAR MORGHULIS — the title of the show’s episode. Arya doesn’t want him to leave. He asks her to say his name. She does so. He says, “Jaqen is dead.” He turns his face away from her and when he brings it back to face her . . . he has a new face.

The Stark boys resurface to find a destroyed Winterfell. Osha, the giant, and the Stark boys find Maester Luwin. He’s dying, and he tells them they must leave. He tells them to go North. Luwin tells Osha that she must protect them. He asks her to kill him. She obliges.

The four begin making there way across the countryside. We see Winterfell burning against the skyline.

Next, we’re back with Daenerys as she attemps to navigate the mysterious, shadow-filled halls of the House of the Undying. She continues to hear screams, and she is confused. She finds herself in a room. It appears to be snowing — it is in fact snow, falling down upon her through a burnt, ravaged roof. A massive gate lifts and she walks out into a desolate land of snow and ice. Violent winds beat across her skin as she makes her way to a small tent. She walks in and sees Khal Drogo holding a small boy. “This is dark magic,” she says, “like the dark magic that took you from me.” They wonder about whether or not this is a dream, or if it’s real; either way, they welcome their time together. She looks down at the small child and bids farewell to her deceased husband; she comes to terms with the trickery.

Daenerys, after leaving the tent, immediately finds herself in a chamber. In the center of the chamber stands a stone pillar, upon which her baby dragons have been chained.The warlock(s) appears and lock her up beside her dragons, telling her that they intend to keep her there until the end of all time. She looks down at her baby dragons. “Dracarys,” she says. Her baby dragon burns the warlock and, in doing so, sets her free of her chains.

Jon Snow is being led through the wildlands. The other night’s guard in the wildling’s hands attacks Jon snow. They fight and Jon Snow kills him — one of his own. The wildlings release Jon’s bindings and Ygritte forces him to look into a valley. We see a vast kingdom. “Time to meet the king beyond the wall,” she says.

Next, we see Daenerys enter the bedroom of Xaro Xhoan Daxos. With her dragons she opens his massive vault. There is nothing in the vault. They lock him in there, along with one of her handmaidens that betrayed her. They steal all his jewels and treasure — so they can buy a ship.

At the end of the episode we see a horde of ice-zombie creatures . . . yes, folks, a badass borderline-undead army is forming. And they want across the wall. *yikes* *shiver*

Whoa! What a high-intensity season finale! Let us know what you thought of this episode in the comments below. What surprised you? What shocked you? What infuriated you? Let us know. One thing’s for sure, this got us PUMPED up for next season. It’s going to be epic!