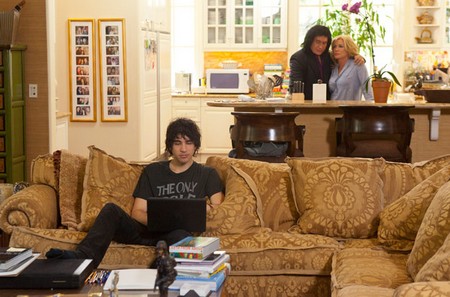 Gene Simmons and his unconventional family are back tonight with their second episode of the seventh season of “Family Jewels”.  Tonight is a double episode – episode 2 is called ‘Starting Over’ and episode 3 is called ‘The Adoption Plans.’  Stand by as we live blog both episodes with all the up-to-the-minute details.

On last week’s show Shannon decides that she wants to adopt a child, which created tension with Gene.   Not only is Gene against this idea, but so are Nick and Sophie. But, it looks like the “KISS” frontman caves in and gives Shannon what she wants.  This adoption causes more harm than good when for the first time in her life, Sophie is at odds with her mother.  If you missed the episode you can read our full and detailed recap here!

On tonight’s episode Gene and Shannon discuss their adoption plan and help Nick prepare for his future.  Nick has graduated six months ago, “He’s a grown man,” Shannon says. “We can’t really say, ‘Do your homework.’ What’s your plan? “Sooner or later he has got to find his own path, and live his own life, and be his own man.”  Shannon fears losing Gene’s support for adoption; and Nick searches for a place to live.

Meanwhile Gene and Shannon’s daughter Sophie was caught yesterday wearing a huge rock and there as speculation it might be an engagement ring. When Sophie realized photographers were taking pictures of the ring she took it off. See photo of the ring here!

Shannon tells Nick she wants him to “get a life,” since he always wakes up after noon. Shannon says she is going to make an appointment for the orientation and Gene is up for it. Shannon next talks about how to make Nick more responsible, Gene says he has to be more serious about music if he wants to be successful in it. Gene and Shannon decide to talk to Nick about his future, they hold a family meeting with him. Gene tells Nick that they have collected all his money and have a check for him that he’s earned and the two tell him that it’s time for him to get out there, concluding that he is cut off.

Gene is talking to his friend Richard and tells him about Shannon adopting a child, Richard tells him that Shannon has to come to her own conclusion if she really wants this adoption. Their therapist tells Gene that he is purposely holding back how he feels hoping that she will agree with him in the end, asking what would he do if she ends up adopting. Gene tells Nick that another Nick can replace him, Nick tells them they can’t replace him. Shannon and Gene are at the orientation, they listen to the stories of other future foster parents. Also they hear the story of a woman who was a foster child and tells them how much she appreciated the parents who treated her like family and not another number. Gene jokingly tells Shannon that she should adopt him, Gene asks her what does she think the children will react to the adoption.

The therapist asks if they have talked to the kids about the adoption, which they haven’t. When asked about his feelings on the adoption Gene does not say anything, Shannon says that Gene would be a better dad since he is much wiser now. The therapist says that maybe the kids will feel upset that she adopted child will get the best version of dad, Shannon and Gene hold a family meeting. Shannon tells the kids about adopting a child, Nick asks if it was only Shannon’s idea or if Gene really had any thought of it. Nick takes it as a joke, but Shannon tells them that one of the only thing she is good at is parenting. Nick says no rejecting it completely, Sophie also says no to the idea as well. Gene and Shannon were not expecting their reaction, Nick confronts Gene and asks if it’s the reason for cutting him off. Sophie doesn’t answer Shannon while she knocks on her door, because she she left. Gene says that he never wanted kids but when Nick was born he cried and was happy when Sophie was born as well, Gene says that he is also happy about the marriage which he was totally against. Nick says that he is totally against it either way.

The therapist talks to Shannon about the revealing of the adoption to the kids, Shannon says she was surprised because of their age the way they acted. Shannon says that she has the ultimate decision, not them. Shannon is talking with her friend Pamela about the adoption, telling her how Sophie was completely upset about it. Shannon says she is not replacing anyone but adding in, telling her she has the money and time to raise another kid. Shannon believed that Gene was slowly siding with her but still feels like the kids, the therapist asks if the reaction of Nick and Sophie changed his mind to agree with not adopting. Gene believes that only Shannon thinks that it’s a great idea, everyone else is against it. Nick is talking to his friend about the adoption and he feels like he wont be the favorite son anymore, Nick also thinks that his father is just as against it as he is and doesn’t feel it’s right. Nick says it’s time for him to get out of there, he’s been procrastinating to long. Nick goes and looks for a place to live in seeing a beautiful place but not sure if it’d be in his price range, Shannon is on the phone and wont let Gene talk. Gene then says that’d he’d do anything for Shannon, except adopt another child.

Shannon is talking to Robyn how Gene is starting to have second thoughts, Robyn says it’s normal for him to be like this so she says that having a meeting with foster parents would give the two of them a better outlook on it. Nick is looking at a place to live at by looking on Craig’s List, seeing a horrible house. Nick tells his mom that it was alright, saw some people and places. Shannon and Gene notice a change in both Sophie and Nick, Sophie wont text Shannon back and Nick is much quieter. Gene says that with adopting a kid brings so many emotions and drama, Shannon tells them about visiting foster families. Shannon and Gene meet a foster family who adopted a child from the hospital who got hurt home, the father says he was not on board for the idea at first. Until he got the little girl who couldn’t speak, say please for a cookie it sold him to the idea. The son says that at first he wasn’t sure about it, but now he’s happy to have three sisters.

Shannon and Gene go to talk to the kids, Gene sees a guitar and asks to play it. Gene tells them about the adoption and the kids say it’s a great idea, the kids say they love having parents they can trust and that love them so much. Nick is eating with friends talking about looking for a place to live, the three girls tell him they don’t mind him moving in if they’re fine with him being the a man. Gene and Shannon visit another family, two fathers who decided to adopt so that they can see someone else grow before it is their time to go. Shannon says the age of the child doesn’t matter, she wants to help the children. Gene says that he’s not sure if he has all the love and affection for another child, but he’s willing to listen. When asked of how meeting the families made Gene feel, he wasn’t able to come out with a real answer.