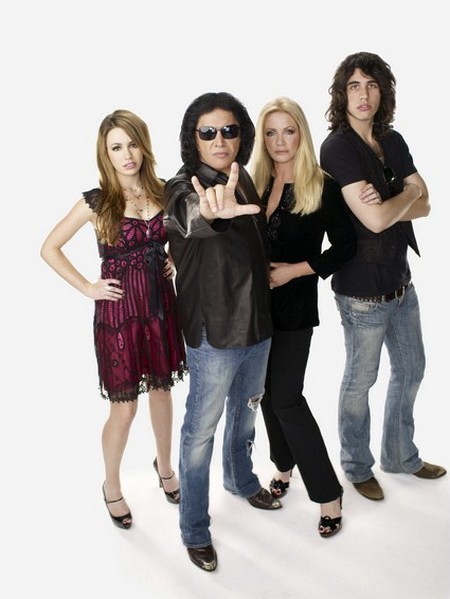 Gene Simmons and his unconventional family are back tonight with their seventh season of “Family Jewels”. Last year just so happened to be their most successful season ever with 1.8 million viewers; so it’s not so surprised that A&E would bring them back for another year.  Last season Gene married Shannon Tweed, the couple had been together for 28 years.

This season promises to be one of the most explosive ever and it begins with Gene and Shannon tell Nick that it is time for him to “fly the coup” and give him all the money he has earned (which is no small chunk of change), then they tell him he is cut off and on his own from now on.

With the kids finally leaving, Gene and Shannon went away for the weekend and the reality hit in when they returned and nobody was there.  This gives Shannon an idea, she wants to adopt a baby! Not only is Gene against this idea, but so are Nick and Sophie. But, it looks like the “KISS” frontman caves in and gives Shannon what she wants. This adoption causes more harm than good when for the first time in her life, Sophie is going to be at odds with her mother.

Meanwhile, Nick is striving to learn from his father’s good qualities, but can’t avoid the bad ones.

Things will be a little different this season for Gene as he will be going on tour as a married man for the very first time.

RECAP: THe family comments on how after the wedding, Gene loves using the word wife when ever refering to Shannon.  Shannon and the kids are looking at pictures of Gene and he comes in with a picture of the whole family taken at the wedding. Sophie, Nick and Shannon aren’t fans of the huge picture, saying that it would never belong in there house on the wall. Nick starts telling them that they should be hating each other after marriage not acting like teenagers. Shannon starts talking to a friend, Stephanie about adopting a child and whether she is too old to adopt a child at her age. Shanon is explaining how she is thinking of adoption and her friend Sophie starts telling her she’s an amazing mother and that it would be possible. Shanon mentions she feels selfish just living in the house with herself and Gene, Shannon is wondering what Gene is going to think about this.

Shannon starts talking to their therapist about how much she’s actually wanted to adopt, before Nick and Sophie were even born. Shannon believe it’s going to be a huge step in their relationship, saying how if she has the time and finances why wouldn’t she take in another child. She has joked with Gene about it and he’s always took it as a joke. Shannon approaches Gene too talk and it fails, Shannon tells Gene if he has ever thought of adopting a child other then dogs, telling him that she has the heart and time to take care of another child. Shannon wants to introduce Gene to someone from the adoption agency for them to talk to. Gene asks if they really should be adopting, Robyn the person from the adoption agency explains they have to go through a training program to take care of an adopted child. Shannon explains how he’s such a work-a-holic and that the child would take up some of her free time. Robyn tells them to go to some of the classes to reassure them if they really want to do it, Gene doesn’t understand why they should adopt after having two children raised already. Shannon says she wants to go to the orientation, but Gene seems very skeptical on the whole situation which makes Shannon believe that he really doesn’t want to go.

Gene starts saying to his therapist that Shannon and himself were much closer when the kids were babies themselves, that Shannon is a care giver. Gene hasn’t made up his mind on the situation, Gene and Shannon start talking about how Gene will is still a rocker and that she doesn’t want to only take care of him at home. Shannon explains that there are some kids that are abused and such and that’s why they are up for adoption. Gene says he’s not against the adoption completely but wonders why they can’t donate to them, Shannon tells him that money isn’t the problem what they need some love. Gene tells Shannon that they should talk about the adoption with their children Nick and Sophie, to see how they think about the situation. Shannon starts looking around at a bunch of old stuff that belonging to Nick and Sophie. Shannon found some keys and goes to Sophie and Nick about it, they both say it isn’t theirs. So Shannon went looking around trying it on random things that Gene owned, Shannon is out walking with her friend and discuss the key. Shannon starts telling her how she tried it on many things in his office and says she’s thinking about a dark conclusion of Gene hiding something from her.

Shannon explains that she has no desire to treat him like a child and only help him, telling their therapist about how she is too old and tired for the whole key situation. Shannon approaches Gene about the key she found under a box in the garage. Gene asks Shannon to sit down to explain what the key is for, Gene tells her that he has portfolio of many nude girls. Gene said he remembers showing them too her and that they’re graphic, she says she doesn’t remember seeing these. Gene tells his therapist about why the pictures were taken, Gene tells her that he was amazed at the amount of women that wanted to sleep with him at the time. So he took their pictures because he was so shocked and excited, but says that they soon became like a trophy. He says that they are a shrine to him, Shannon and her sister Tracy start talking about the nude portfolio and getting rid of them. Sophie comes in asking Shannon for her mittens to go visit her boyfriend, both Gene and Shannon comment on how they like her boyfriend. Shannon talks about Sophie with their therapist, commenting on how she hopes that she makes better choices then she did was younger. The two talk about how Shannon is doing with forgiving Gene for his past, Shannon says that it’s hard when so much of it keeps popping up in the future wondering at times if she really knows who he is. Robyn tells Shannon that they have some room for the next orientation on the phone and Shannon turns it down saying that maybe they’ll go to the next. Shannon tells their therapist that she believe that the whole thing with Gene is a lot of baggage to handle for a child.

Gene buys breakfast for Shannon and she sees it as some sort of distraction from the portfolio nudes, telling him that he should of gotten rid of the nudes a long time ago. Gene then tells Shannon that when ever she wants they can go get them and burn them, Shannon then asks him if he’s got any other secrets. Gene tells him that she now knows all there is too them, the two start talking to their therapist about the whole situation and why he hides these pictures. Shannon says she doesn’t need them in their marriage and when asked if any of these women meant anything to Gene. He says they meant nothing too him and that the pictures were to remind him of the crazy stuff he’s done. When asked if he’d like to see Shannon and her ex-boyfriend together in pictures all around the walls of their house and he said it make him feel horrible. The two get home and Gene brings the pictures along, Shannon sees what’s inside and is incredibly unhappy. She pours gasoline on the first set of pictures and then throws a match on top of them as Gene says, “Goodbye my friends.” Shannon sees that with the burning of the pictures it shows how more committed Gene is to their relationship, making it a much bigger step closed between the two.