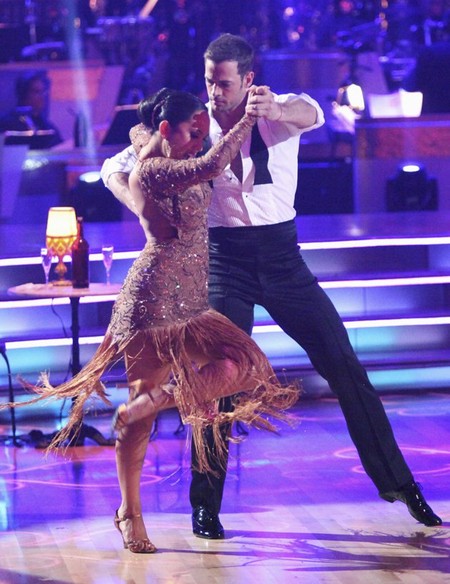 ROUND 2 – William Levy danced the Paso Doble tonight for his trio dance as Dancing With The Stars continued with its eighth episode.    The competition is really heating up as the remaining six couples hit the ballroom tonight with two rounds of competitive dance performances, a ballroom dance and the Trio dance — both of which will be a style that they’ve not yet performed.  We recapped the tonight’s show for you and if you want to see how all the couples did go HERE!

William Levy and professional dancer Cheryl Burke, dancing the Foxtrot.   Cheryl wrote this about their performance this week, “Next week is two individual dances, so you’ll really see who can handle two dances and who can’t.  We have the foxtrot and the paso doble. I think the paso is going to be one of William’s favorite dances so I think that will be really exciting. And then the foxtrot, I think will be fun, too, so we just have to see what happens and work hard.”

Judges Comments: Carrie Ann: This is a fun night. I love the trios.   Your lines were perfect. It was insanely fun to watch – lost time once.  Len:  I salute you I thought you did a fabulous job. You allcame together. You did really really well. Congratulations.  Bruno:  William and Tony there can only be one between the two raging Bulls. I couldn’t ask for more as to the performance value. You used Cheryl as a cape – beautiful as I have ever seen. But, you went out of sync once. It was too evident.