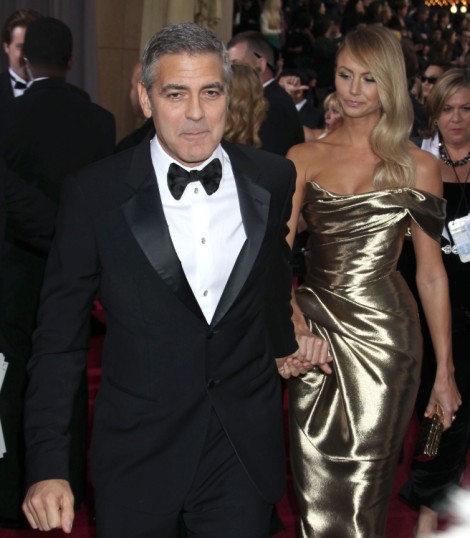 Well, the George Clooney and Stacy Keibler break up was inevitable and the only person that’s really shocked by the whole thing is Stacy Keibler. I almost feel sorry for her… almost. Because she had a good run – a year or so. George only keeps his women that long before he sends them off with their new fancy tastes and broken hearts. But she’s not totally at a loss. She’s a household name now and spent the summer in Italy. Were the close quarters just too much for the marriage-shy star?

A source told The Sun: “She said George wants to be on his own again and has no intention of getting married. Stacy hoped they would be together long-term. It was a big breakthrough to spend time with his parents. But over the last few weeks George has pulled away from her.”

Should we feel sad for Stacy? George has never given the public any reason to think that the woman he was finally going to settle for was an ex-professional wrestler. But still… they spent the summer together in Lake Como. Their parents met. George Clooney’s kind of a d-ck. Why do that to someone? I’m sure he told her there was no way it was permanent but girls are DUMB! Sorry girls out there – but we are. When guys say one thing but do others, we tend to let our hearts take over. Brains be damned! And everyone thinks they’re special, right? We all think we’ve got that little something that our man just can’t live without. Well, George Clooney keeps it real and spits on those dreams!

Still… I can’t help but be sort of excited about this. Now Gorgeous George can fulfill my hopes and hook up with Sandra Bullock. I’ve been praying for this ever since they filmed Gravity together and George was caught playing with little Louis Bullock. It was adorble and my heart took over! I know he’s the last thing Sandy needs but brains be damned!

Who do you think George should  move on to? Are you hurting for Stacy?