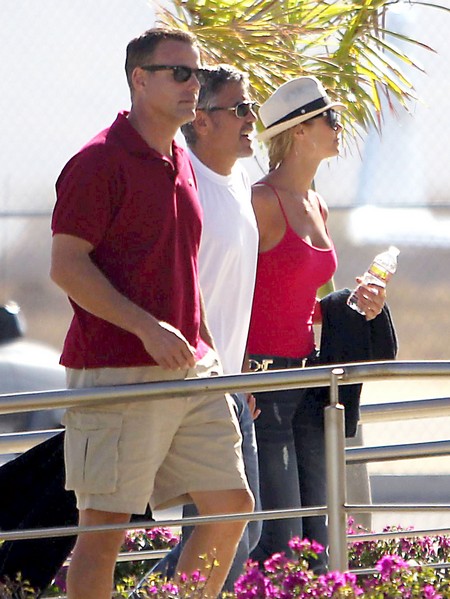 According to people in the know it looks like George Clooney and Stacey Keibler will marry. Family and friends of the couple, and most importantly, Star Magazine, think that Stacey is the right girl for George and consequently that he will propose soon. And when has a tabloid ever been wrong?

Stacey is almost 20 years younger than George and marrying him would obviously be a brilliant career move on her part.  Even as his steady girlfriend Stacey has seen her career and fame skyrocket – but marriage would really do the trick – truly cementing her connection to Hollywood’s upper crust.  Does anybody see a Katie Holmes-Tom Cruise inspired relationship here?

On George’s part, he can’t get a hotter and more compliant babe than Stacey.  She lets George enjoy his hobbies – playing political hero to Hollywood, attending White House dinners, and hanging with President Obama – without bitching too loudly when she is left behind like the hired help.  Of course we assume that Stacey does get to participate with George when he enjoys his other habit – kinky sex! What a woman, a true model for the 21st century – strong, independent, proud… LOL!

Love – you say they are in love?  Whatever… George is all about love isn’t he – just look at his track record.  Don’t worry about Stacey – she knows what she is doing – however this relationship turns out she will enjoy a better career as a consequence of her time spent with good old George.

Star Magazine Print Edition, July 30th, provides us with details: George Clooney has reputation for being Hollywood’s ultimate ladies’ man. But sources close to the 51-year-old playboy say that after a recent family vacation in Europe went off without a hitch, his mom wants him to get hitched to model girlfriend Stacy Keibler, 32. George also seems to be pretty into the idea of making her his wife.

Earlier this month, George and Stacy chilled with all four parents at George’s Lake Como compound, in Italy.

“That’s where George and Stacy first fell in love, so having their parents there was important to them,” an insider says. The Clooney and Keibler clan got along so well that the friend is calling the trip “the final step before George and Stacy get married. Now everyone believes a wedding is in the works!”

George’s parents “adore” Stacy. “She’s the first girlfriend George has had in decades that his parents will spend time with,” the friend dishes. George’s mother, Nina, “is definitely pushing him to marry Stacy – and have babies!”

If George popped the question, Stacy would “say yes, without a doubt,” another friend says. But Stacy, who’s nothing like his high-maintenance ex, Elisabetta Canalis, would never pressure him.

“Stacy isn’t just George Clooney’s professional girlfriend,” the insider says. “She has her own career.”

George has shied away from the topic of marriage in the past, but it seems he’s rethinking his stance. The source says, “He’s looking to settle down, and he wants to marry Stacy.”

What can we say?  The only distinction between female stars and their toyboys and George and Stacey is, uhmm, well… NOTHING!!  Yet for some unfair reason the older women get ridiculed.  Well I’d like you to tell me the difference between Madonna and her toyboy, Brahim Zaibat, or  J.Lo. and Casper Smart – on the one hand – and George Clooney and Stacey Keibler on the other?  Go ahead, tell me.