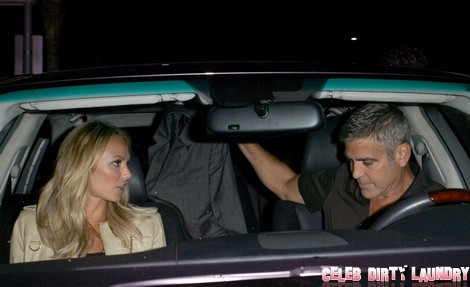 George Clooney stuck it to his girlfriend, Stacy Keibler, literally. The hottest man in Hollywood decided to make a rather public display of his affections by presenting Stacey with a gold ring. Before you start sticking pins in your George voodoo doll, wait. It wasn’t that kind of ring.  Stacy’s friend explained, “It does look like a wedding band, but it’s actually a very simple vintage gold ring.”

WAIT. So, this wasn’t a proposal—it was just a ring. May as well have been a vacuum or a blender. I bet Clooney is regretting his choice of gift right now. Or do I have to remind you that Stacy is a former WWE wrestler, and her specialty is the roundhouse kick?

The terminal bachelor appears to be in no rush to make any sort of commitment to the woman he’s been seeing for the past year.  One thing we do know – Stacy isn’t good enough to accompany George to the White House when he hangs with his good buddy, President Obama.

Maybe Clooney should take a few notes from his movie, The Descendants, in which a reclusive husband finds out his comatose wife was having an affair. George, you’d best step it up or Stacey is going to drop kick you out of her life and hook up with a man who doesn’t fear commitment! Although a friend reported that “Stacy was blown away” by the ring, we expect that her smiles were a little bit forced. What sane woman wouldn’t want to walk down an aisle to George’s waiting (and ripped) arms?

Well, what’s the answer to this riddle? Are George and Stacy happy taking it slow, or does he enjoy publically humiliating her with quasi-gifts?