Get Behind The Scenes Of The Hunger Games! (Video) 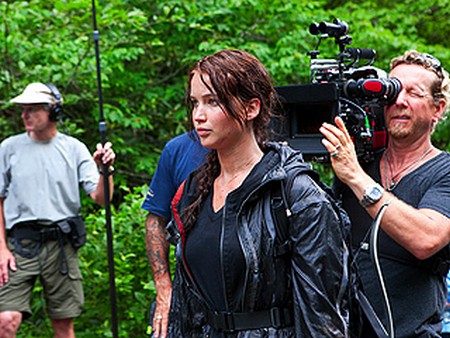 The first installment of the Hunger Games franchise hit theaters a few months ago and killed it at the box office (not that anyone had a doubt that it wouldn’t). While fans are eagerly anticipating the next film, Catching Fire, to begin shooting some time this fall, they can get their Peeta and Katniss fix by means of the upcoming Hunger Games DVD release next month.

Lionsgate just debuted a new special features clip, which premiered at Comic-Con in San Diego last night.  The clip shows in detail the production work it took to create the wall of fire and burning trees that Katniss is forced to run through.  I personally was quite impressed to see that real fire was actually used and it wasn’t all just CGI.

It is also quite evident how Jennifer Lawrence, who plays Katniss, stayed in shape – she had to do A LOT of running (and sweating).  Of the epic fire scene, Jen had this to say:

“My memories are everybody saying, ‘get back, get back!,’ “And me standing there where nobody else is allowed to stand and I’m like, ‘What about me?!,'”

The DVD will be released August 18th, and here’s a full list of bonus features.  Also check out this clip of Jen running through the forest and the fire – pretty awesome!

“Preparing for The Games: A Director’s Process” (Blu-ray Exclusive)