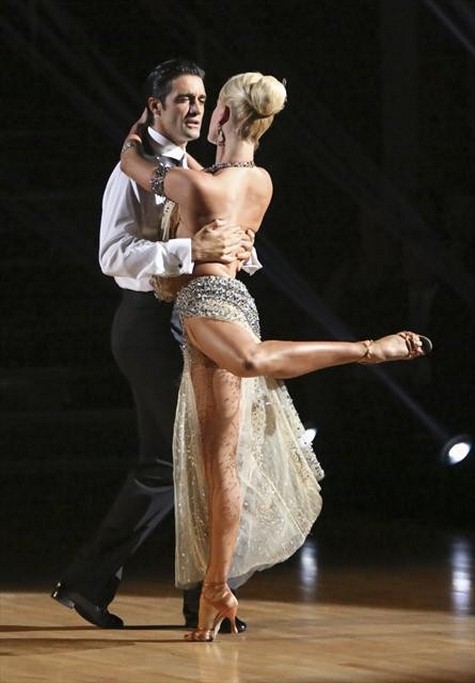 Gilles Marini danced a Cha-Cha-Cha routine for Country night, on Dancing with the Stars: All-Stars performance show tonight.  The danced their Cha-Cha-Cha to “Man! I Feel Like a Woman” by Shania Twain.  All the 8 remaining couples hit the stage performing to some of country music’s biggest hits. The celebrity was also required to perform a solo during his or her routine.   If you missed the show, we recapped tonight’s show for you and if you want to see how all the couples did go HERE!

Gilles Marini and professional dancer Peta Murgatroyd dancing a Cha-Cha-Cha routine.  Gilles and Peta are embracing their country routine.  As a matter of fact Gilles said he will be wearing a cowboy hat during country week!

Judges’ Comments: Len: “Gilles what I love about you is you come out and give 100%, there are no half measures.  Well done!  That is what I want to see!”  Bruno: “I don’t know what that country was but I want to pay a visit, you sold.  It was sexy and full on.  Your solo you did so much, you are a performer.  The foot work was not as clear as it could have been, but the performance was magnificence!”  Carrie Ann: “It was so creative, so sexy.  It was so appropriate for both of you.  You need to watch your hands, t-rex hands.  Get rid of the t-rex hands and you are on your way!”

Watch the video below and let us know what you think? Do you think Gilles did enough to avoid elimination this week? Sound out in the comments below!