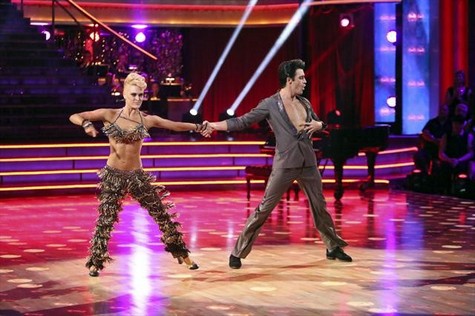 Gilles Marini danced the Tango for his reinterpretation of an iconic dance on DWTS.  Gilles and Peta chose to recreate Maks and Erin’s season 10 Tango on Dancing With The Stars All-Stars 2012 Season 15 tonight.  All the 11 remaining couples hit the stage tonight to reinterpret an iconic “DWTS” dance and face a double elimination on this week’s Dancing With The Stars.   If you missed the show, we recapped tonight’s show for you and if you want to see how all the couples did go HERE!

Gilles Marini and and professional dancer Peta Murgatroyd dancing the Tango.  Gilles said this about tonight, “Monday night football? Forget about it! Just recap later on. Watch Peta dancing next week. It’s going to be sick.”

Dancing with the Stars continues tomorrow night with the Results Show.  The couples face a double elimination and Karmin perform “Hello” and their irresistibly addictive single, “Brokenhearted,” from their debut album “Hello,” out now. Last year Karmin captured the attention of music lovers worldwide when they posted a cover of Chris Brown’s “Look at Me Now.” The clip went viral, becoming one of YouTube’s most viewed videos; since then they’ve racked up about a half billion views for all of their videos online.

Watch the video below and let us know what you think? Do you think Gilles did enough to win the Mirror Ball Trophy? Sound out in the comments below!