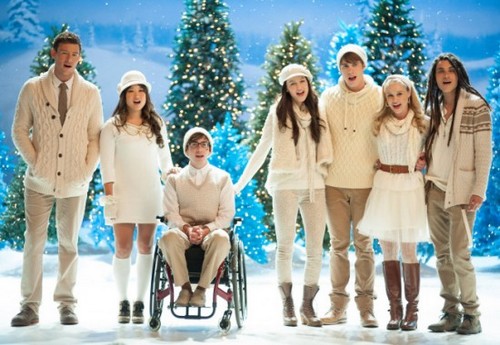 Tonight a whole new episode of FOX hit show GLEE airs called “Glee, Actually.” On tonight’s show in an homage to the beloved holiday film “Love, Actually,” seemingly separate storylines come together to form one merry GLEE episode.   Did you watch last week’s episode? We did and we recapped it here for you!

On last week’s show as the New Directions regrouped after Sectionals, Finn pondered his future with the club. Meanwhile, Rachel prepared for the NYADA Winter Showcase, and Kurt got his shot at redemption with a second audition. Also last week Whoopi Goldberg returned to Glee as Carmen Tibideaux. Kurt took the stage in NYADA’s Round Room to perform “Being Alive” as his second audition.

On tonight’s show In an homage to the beloved holiday film “Love, Actually,” seemingly separate storylines come together to form one merry GLEE episode. As the end of 2012 draws near, Sam and Brittany live their lives to the fullest before the Mayan Apocalypse occurs. Meanwhile, Jake and Puck spend quality sibling time together for Hanukah, Artie has a holiday dream that changes his outlook on life and Kurt has a Christmas he’ll never forget

Sue pens a letter, declaring that it’s Christmas again in a way only Sue can, full of sarcasm.

Artie fell while in his wheelchair. He slipped over on the ice. Finn takes him to the nurse’s office. The nurse says he hit his head pretty hard. Artie is tired of being so helpless.  Finn helps him onto the doctor’s table. Finn wishes he was never in the chair and starts daydreaming. In his dream, he has full use of his legs and is wearing a Varsity jacket. He approaches Gina who is stuttering again. He sees his guardian angel, Blaine, who has granted his wish. He was never in a car accident and Becky is now the school slut because he never dated her. The jocks are picking on Curt for being gay. Kurt never graduated but couldn’t bear going to school more than twice a week because of the bullying. Mr. Schuesteris now a drunk and there is no more Glee club.

Rachel no longer lives in New York. She works in the school library and only sings the chorus.

Kurt was the glue that held everyone together but in the alternate universe, it disbanded. He tries to get them back together.

Artie sings “Feliz Navidad” while the others look at him as though he’s gone crazy.

Blaine tells wheelchair boy that Quinn died of a broken heart, much like her body, her spirit never recovered.

It is now the present again. Artie asks Finn for help in getting back into his wheelchair. Finn sympathizes with him being in the wheelchair. Artie says that for better or worse, it’s a part of him.

Kurt’s dad shows up with a Christmas tree for Kurt and Rachel. He didn’t want them to go without one. He wanted to keep the tradition going  since Christmas was the first time he smiled as a child when his mom died.  Burt and Kurt are going to see a musical together. Burt later tells Kurt that he has prostate cancer. Kurt feels like he is going to be sick. Burt says that the doctor’s caught it early and his heart attack made him get early check ups. Kurt wants his father to be around to watch him reach his destiny. Burt says that you have to hold the people you love close to you; it is what he has learned after facing death three times in the eyes. Back at Kurt’s apartment, they exchange gifts.

Blaine surprises Kurt by showing up. Burt paid for Blaine to fly out and surprise him. He knows everything and promises to keep an eye on Burt. The two start skating and perform, “I’m Dreaming of a White Christmas”. Burt watches from afar. Blaine says he and Kurt will always be there for each other even if they’re not together.

The jocks tease Jake about how he’s going to celebrate. Puck jumps to his defense. Puck thinks he needs a mentor. They are going to ride out to California in a hog car. Puck is working on a screenplay and networking. He says in Hollywood, if you’re a gay or Jew, you’ve got it made. The two perform “Hanukkah Oh Hanukkah” on the lot.

Jake is amazed that Puck lives in a mansion but it turns out that he is pool boy. Puck didn’t think he would be impressed. Puck says that he’s lonely out there and didn’t want him thinking that he was a loser. The boys and their mothers go out to dinner and start arguing over the affair. The boys point out that Huck ran out on all of them. They eventually agree that their father was an ass who only did one thing right: bringing them all together.

Back at school, Brittany is giving out such gifts as expensive watches. She says the Mayan apocalypse is coming after watching a documentary. She cashed in her savings and wants everyone to enjoy their last days before Dec. 21. Sam believes her. The two form a Mayan group—first and last meeting since the end of the world is near. They start giving blunt truths before the ‘group’ walks out. Brittany and Sam still have each other and break out into “Jingle Bell Rock”.  Sam asks Brittany to marry them before the world ends. Shannon officiates over the Mayan ceremony. 4days later, it is Dec. 22 and they are still alive. They survived the Mayan apocalypse. They’re also married.

Sue asks Shannon what’s going on. Shannon says there is a faculty Secret Santa. She gives Becky a sweater, but Becky wants something she doesn’t already have. Becky wants a hot date. Sue says she’s not the only person she has to buy for. She needs to buy a gift for Mrs. Rose, the cafeteria lady who eats too much.  Sue overhears Mrs. Rose and Marley speaking about some of their financial and personal issues. All she wants is for her Marley to sing her something. She belts, ‘The First Noel”.

The two are surprised when they get a Christmas tree and $800, all courtesy of Sue. Marley still thinks they should call the police since their Secret Santa broke into the house.

Jake and Puck’s mom trade stories about the man who did them wrong. Puck says he is a screenwriter and can write anywhere. He is moving back home.

Shannon tells Brittany and Sam that they are not really married. She thought they were “special”. Brittany feels empty since the world didn’t end. Shannon gets a Google alert—a new doctor, Dr. Indiana Jones has set a new end of the world date in 2014. Brittany is excited.

Kurt, Blaine and Burt to watch football. Kurt can only last a few seconds.

Mrs. Rose thanks Sue for her generosity but she can’t accept the money. Sue says they both know how hard it is to be a single mother and to take the money so that her daughter can get better. Sue then tells her to get out. Mrs. Rose says Marley wants to say thank you as well. The Glee Club is going to sing a song for her. They perform, “Have Yourself a Merry Little Christmas”