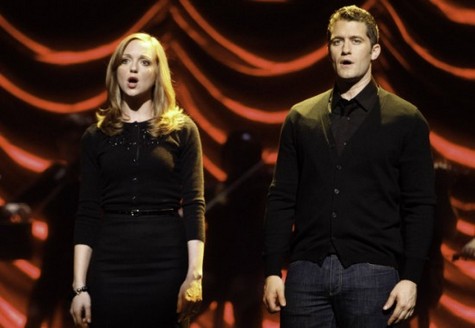 Tonight on FOX a whole new episode of GLEE airs called “Break Up.” On tonight’s show Rachel and Kurt are caught off-guard when they get unexpected visits in New York City. Did you watch last week’s episode called “Makeover“? We did and we recapped it here for you!

On last week’s show Blaine and Sam were running together for senior class office, and Brittany was running against them. Blaine ended up giving Sam a makeover during the episode to look more candidate and serious like.  Kate Hudson guest stared.

On tonight’s show Rachel and Kurt are caught off-guard when they get unexpected visits in New York City. Meanwhile, Santana and Brittany deal with the long distance between them, and Will and Emma disagree on a new job offer in the all-new.

Rumor as it that if you love any of the couples on Glee, tonight you are going to shed a tear or two.  Rachel and Finn have an emotional conversation which is as intense if not more than the season 3 finale.  There are a couple of light-hearted moments in the episode but for the most part it is sad.  Even the songs featured tonight are sad.

Tonight’s episode looks like it is going to be an emotional episode and you won’t want to miss it, so be sure to tune in for our live coverage of FOX’s “Glee” at 9 PM EST! While you wait for our recap hit the comments and let us know if you are enjoying season 4 of Glee, so far!

Tonight’s recap: If you saw last week you already know that Finn arrived on Rachel’s NYC doorstep. She and Finn are reconnecting in a kind of an odd way. They go out together and Finn is in the awkward position of watching Rachel sing a duet with another guy. Adding insult to injury they sound awesome together. Meanwhile Blaine has returned and he and Kurt are catching up on all the things that have transpired while they were apart. Blaine chases Rachel’s song with a dedicated piano of Teenage Dream that melts Kurt’s heart (and mine).

Finn is obviously feeling very out of place in the city. Rachel wanted him to sing with her but he shrugs off the idea. He is more concerned about whether or not she is dating Brody.  Blaine tells Kurt about the meaningless fling he had which absolutely crushes Kurt. All four sing their own variation of No Doubt’s Don’t Speak before crawling into the same bed.

Kurt catches Finn making a quick get away and Finn tells him not to let Rachel know that he’s leaving. He hightails it back to Ohio and then crumbles in Mr. Schuester’s office. He is crushed by Rachel. Blaine left too and he and Finn sit in on Mr. Shue’s class as they try to pick out new fall music. Finn suggests picking songs from Grease because everyone likes it.

Will has made it to the Blue Ribbon Panel and he expected Emma to tag along with him. She’s furious and feels like he expected her to follow him like an obedient puppy dog. She loves her job and doesn’t want to leave.

It’s the night of messy splits and broken hearts. Santana and Brittany share a Taylor Swift moment because Santana wasn’t sure how to express herself without the music. Santana admits to being attracted to another woman. She wants to be mature about things but has to admit long distance relationships rarely last more than a few months.

Rachel returns to the stage where Finn proposed to find him there. She tells him that he broke her heart by running out and that he was everything to her. He was her first love and as much as she wants him to be her last love, it can’t be now. They need to split. Broken hearts and tears all over that stage as all the busted up couples close the show tonight.