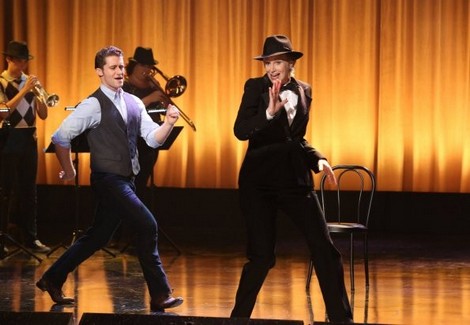 Tonight on FOX a whole new episode of GLEE airs. On tonight’s episode called “Makeover”, the campaign showdown begins when Brittany and Blaine go head-to-head for Student Council President. Did you watch last week’s episode called “Britney 2.0”? We did and we recapped it here for you!

On last week’s show Gleeks and Britney fans were introduced to the second version of the last infamous Britney episode, namely “Britney 2.0.” The episode worked on certain levels, especially with the subdued Britney finale by Marley (Melissa Benoist), who did a much better version of the sentimental ballad “Everytime”.

However, the fourth season premiere issues were still prevalent and the re-introduction of old characters (Noah Puckerman) came across as naïve and heavy handed. The stocky editing resulted in a half-baked episode of lackluster Britney songs and the dialogue, most specifically the breaking of the fourth wall by Brittany (Heather Morris), became stuck in literal characterization. In the world of computing, this episode might be akin to Windows Vista – bugged beyond belief and too clunky for regular users.

On tonight’s show Blaine and Sam are running together for senior class office, and Brittany is running against them. Blaine will end up giving Sam a makeover during the episode to look more candidate and serious like.  Kate Hudson guest stars.

Glee is slowly coming out of the comatose state it was in during the premiere episode, but it is unfortunately still lingering in the cold recesses of stocky dialogue, weird editing and bad acting.  Lets hope tonight is a better episode.

Tonight’s episode looks like it is going to be a fun episode and you won’t want to miss it, so be sure to tune in for our live coverage of FOX’s “Glee” at 9 PM EST! While you wait for our recap hit the comments and let us know if you are excited to see all the changes in season 4 of Glee?

Tonight’s recap: Tonight’s episode begins with Blaine singing Everybody Wants to Rule the World and we learn by the end that he is running for class president. Meanwhile in NYC Kurt has the opportunity of a lifetime, he’s applying for an internship with vogue.com. Talk about perfect casting, the Editor is played by Sarah Jessica Parker and I have to admit, Isabelle seems to be a very mellow, older Carrie Bradshaw. That’s never a bad thing in my book.

Brittany is also running for president (again) and reassures Artie that if he throws his support being her then she’ll let him call all the shots. He runs through questions with her in order to prep her for being grilled by the student body. He gently tells her they have to do it because everyone wants to hear her speak only to hear her make a fool of herself.

Kurt has landed the Vogue internship and after a chat with Rachel he tells her that he’s about to totally make her bad life better. She is still in hell with the dance classes, mean girls in them and especially Ms. July and so she could clearly use some cheering up. Kurt takes her into the couture vault. They are unexpectedly greeted by Isabelle who joins them for You’re Never Fully Dressed Without a Smile, while making Rachel completely over.

Will asks to speak to Emma as a guidance counselor not his fiancé, then tells her that he has put in for a position that could take him away for awhile. She tells him that the wedding can wait and she’ll support his decisions.

Blaine is absolutely mortified by his running partner, Sam. During a debate Sue asks Sam if his stripper past embarrasses him and he responds by ripping off his shirt and dancing on stage. I’m taking that as a pretty clear cut no!

Isabelle tells Kurt that Anna (as in Wintour) saw the makeover video that he shot of Rachel and she had one word to say, “Great”. She tells him that she believes he has a huge future in fashion and that he will be a designer that is chased by all the design houses.  Meanwhile back in NY, Rachel is in the studio when her crush, Brody strolls in and contempliments her on her makeover and then they then duet to A Change Will Do You Good. When he tells her that she’s amazing Rachel invites him to dinner.

Blaine is super excited to have won the presidency and Artie doesn’t even really want to help him. It’s Blaine’s ship to run.  He is depressed though because he doesn’t have Kurt there to share it with. Instead Kurt is chit chatting in the Vogue offices in NY.

Of course just as Brody arrives at the door Rachel starts a kitchen fire and ruins the duck she was making. They order pizza in the end. Rachel says she’s liking this new side to her and just that fact that she cooked dinner for a guy is huge. They bond as Moon River plays in the background. You’ll have to tune in next week to see if the sparks fly between them.