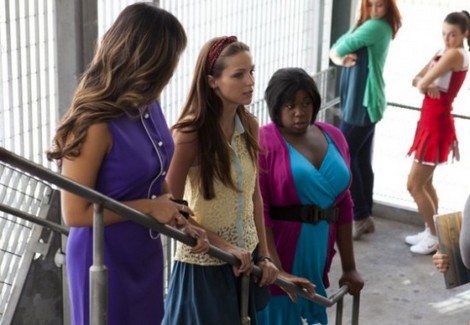 Tonight on FOX a whole new episode of GLEE airs.  On tonight’s episode called “Britney 2.0, ”  Brittany S. Pierce is in a funk and turns to her icon Britney Spears’ music for inspiration!  Did you watch last week’s season 4 premiere?  We did and we recapped it here for you!

On last week’s show the members of New Directions competed amongst themselves to become the next star of the glee club.  The New Directions took on “Call Me Maybe.”  During open auditions, a fresh crop of students was introduced, including Marley and Jake Puckerman, Puck’s half-brother. Meanwhile, Rachel had a rocky start at NYADA and struggld to please her demanding dance teacher, Cassandra July. She also mets Brody, a handsome upperclassman.

On tonight’s show Brittany S. Pierce is in a funk and turns to her icon Britney Spears’ music for inspiration! The New Direction ladies take on the Britney Spears hit “Womanizer” tonight. Meanwhile, Rachel struggles to adjust to life in New York, but is helped by her newfound NYADA friend, Brody Weston

We’re still not sold on the fourth season universe of Glee, but with the inclusion of interesting new characters and the crazy Cassie, we might just watch the fourth season with our eyes wide open.  What do you think of season 4, so far?  Hit the comments and let us know!

The new Thursday timeslot of Glee dipped severely in opening ratings, with a total of 8.1 million viewers – down 12 percent from its third season premiere.

Tonight’s episode looks like it is going to be a fun episode – who doesn’t love Britney Spears songs.  So you don’t want to miss it, so be sure to tune in for our live coverage of  FOX’s “GLEE” at 9 PM EST!

Tonight’s recap: Brittany is talking to herself, she had a rough summer and missed Santana, but she is ready for her best “Brittany Bitch” dance. How can you not lover her? Sue didn’t like it and called it garbage, wrapped in skin. Sue calls her into the office and shows her that she got an F on her work. She tells her further that she is a horrible role model for the Cheerios. Sue is taking Brittany off the Cheerios.

Cassandra is teaching the Tango, she tells Rachel that she isn’t good enough for the Tango so she needs to sit out.

Brittany looks terrible, after school she climbs into bed eating cashews and bacon. Will is worried about her and decides to bring back Britney 2.o to get her back to her old self.

The guys start singing “If I was Your Boyfriend” and Brittany is somewhat inspired.

Rachel and Kurt are hanging out and she tells him that her dance instructor doesn’t think she is sexy enough. Kurt finds out who her instructor is and can’t believe that it is Cassandra July; she is so angry all the time. Kurt tells Rachel to go without a bra next time to show her sexy if she wants sexy.

Marley has a crush on Jake but little does she know that he is a “Womanizer”, but don’t worry, Mercedes is going to tell her all about it when everyone breaks out singing Britney’s awesome hit from her Circus album. Do you think Jake is a womanizer? In the end, Jake tells Marley that they should hang out some time and she is speachless.

Rachel meets up with Brody and tells him that Cassie doesn’t think she is sexy, so what better way than to have him dance with her. Brodie’s in, he would love to do it.

Will approaches Jake and tells him that he notices that he’s not attending classes, Jake basically tells him to mind his own business.

Marley meet Jake on the field and tells him that for the first time she feels great being at this school. Marley and Jake break out singing “I’m Crazy For You”. Appropriate, since the two look like they are really into each other, or, is he really playing her like Mercedes thinks he will?

Brittany is talking to her phone, Kiki, she’s really losing it. Everyone wants Brittany back in the Cheerios and after they pressure her, she decides that she is going to perform for the assembly but she is going to have to lip sync and not use her voice, no worries though because she is going to choreograph a kick ass routine.

Rachel and Brody show up to dance for Cassie, Rachel is convinced she will prove to her that she is sexy, she is singing “Oops, I Did It Again” and showed up with hot bright red lipstick on. Rachel is done, she wants to know if she can do the tango now and Cassie tells her no. Rachel is upset and calls Cassie a YouTube joke, she is thrown out of the class with Brody.

In the cafeteria, Marley’s mother is made fun of and Jake gets into a fight. Will breaks it up, brings Jake into a room where he finds Noah, his brother. Jake tells him that he is wasting his time, he’s not his brother. Noah tells him that he knows what it is like to go around all day and try to prove something that actually never really helps to make you a man. Noah goes on to tell Jake that he should join Glee club and whether he does or not, he’s still his brother.

Time for the fall assembly, Principle Figgins first addresses a rumour that he likes to be milked like a cow because his breasts are filled with delicous milk, it’s not true. It is almost time to perform and Brittany is not even ready, leaving everyone else shocked.

Brittany’s performance was so bad and the students noticed that she was lip syncing. Will is furious, they could be barred from performing. Brittany resigns, this is the end for her.

Rachel heads back over to see Cassie and apologizes to her. Cassie tells her to forget it, she lost it, no big deal. Cassie tells her that if she can’t handle her, how can she handle Broadway. Cassie goes on to explain that she is hard on her students because she knows that it is even harder out there. But, Rachel should not have had the melt down because if someone had filmed it and posted it on YouTube, she would never have a career, she would only be known as that crazy dancer.

Brittany is hitting rock bottom, so she can make a glorious comeback just like Britney Spears. Brittany is so ready to come back, but she is just so sad that nobody understood what she was feeling. Santana would have understood, she misses her.

Brittany goes to see Sue and tells her that she should be reinstated into the Cheerios. Sue calls her an idiot, she has to improve her grades. Brittany proves that with Will’s help her grades are already improving, Sue welcomes her back.

Rachel is lonely, Kurt tells her that cake will solve it. Just then, Brody arrives with flowers for Rachel, he traveled 45 minutes on the train to see her. Kurt leaves and Brody goes on to tell Rachel that he really liked dancing with her and thinks she is really sexy. When Brody tries to kiss her, she stops him and he realizes that she is still in love with her boyfriend. Brody tells her that is fine, but just know that whenever they are together, all he is doing is thinking about kissing her.

Jake is joining Glee club and asks Marley if he can sit beside her. Marley thinks he is joining because of her, but it’s his brother that made him want to do it. Marley had Jake’s jacket on, but his girlfriend, Quinn, claims it from her and Rachel is heartbroken but tells them they make a good couple. Mercedes was right, Jake is a player!

Jake walks into Glee club and looks around, he looks shocked at seeing everyone. Marley asks Will if she can sing one more Britney song, “Everytime”.