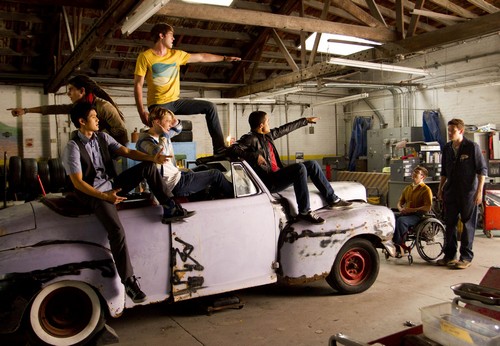 Tonight on FOX after a month hiatus a whole new episode of GLEE airs called “The Role You Were Born To Play.” On tonight’s show with auditions for the school’s musical in full swing, not all the gleeks are eager to participate; while some see getting cast as a shot at acceptance, others have less altruistic goals. Did you watch last week’s episode before the hiatus? We did and we recapped it here for you!

To catch you up, on the last show Rachel and Kurt were caught off-guard when they got unexpected visits in New York City. Meanwhile, Santana and Brittany dealt with the long distance between them, and Will and Emma disagreed on a new job offer.   Rachel and Finn had an emotional conversation which was as intense if not more than the season 3 finale.

On tonight’s show the school’s musical in full swing, not all the gleeks are eager to participate; while some see getting cast as a shot at acceptance, others have less altruistic goals. Meanwhile, an unlikely advisor helps Will and Emma work through a rough patch in their relationship, the arrival of student Ryder Lynn proves to be a game-changer for several members of New Directions past and present, Sue finds a new narrow-minded cause to champion, and four finalists face off for the lead roles as the cast for Grease is announced.

Tonight’s episode looks like it is going to be an emotional episode and you won’t want to miss it, so be sure to tune in for our live coverage of FOX’s “Glee” at 9 PM EST! While you wait for our recap hit the comments and let us know if you are enjoying season 5 of Glee, so far!   Also check out some photos of tonight’s episode below!

Tonight’s episode: Artie is at the tire shop to visit Finn and tells him that he dedicated a song to him last year because he looked up to him and wants him to direct with him. Finn says no and Artie won’t do the musical if Artie doesn’t do this with him.

Blaine can’t get over his breakup with Kurt and tells Sam that he won’t even return his calls, Blaine sings an awesome rendition of Olivia Newton John’s “Hopelessly Devoted To You” to audition for “Grease”. Blaine did great and went offered to be in the musical, he turns it down.

Will confesses his love to Emma, as his equal partner.

Coach gives Finn some encouraging words and tells him that he can move people. Finn sees a new person on the football field, Ryder Lynn and wonders after seeing him dance around on the field, if he would be good for the lead role.

Tina and her Wade are dying for the role of Rizzo and decide to try out together even though Sue is completely against it.

Finn approaches Ryder and tells him how Glee club changed him and encourages him to try out later in the day.

Artie wants Finn to choose a juke box and when he does, Artie says it’s the wrong one, they should pick a Zodiac. Ryder shows up, before auditions and tells Finn he wants to try out but he doesn’t want to sing. Finn thinks Ryder is a classic rock guy and  gets him to join along with him singing.

Ryder approaches Marley and tells her that he heard she will be playing the lead role of Sandy and since he is probably playing Danny, he thought they should get to know each other.

Kitty convinced Noah to try out for Grease, they do it together and perform “It Started With A Whisper”.

Coach Sue is not happy with Wade possibly playing Rizzo and calls a meeting and threatens to cause a public sink if they give him the role. Will tells Sue that he will not get involved, Finn is the director. Finn then tells Sue that he will do what ever he wants and goes on to throw insults at her, telling her she had a retarded baby.

It’s time for call backs, Finn and Artie want to see the chemistry and dancing between the Danny and Sandys. After a performance to “Born to Hand Jive”,

Finn offers Wade the part and tells him that there is going to be a lot of heat for it so he better be prepared.

Marley got the part of Sandy and Ryder the part of Danny which really irritates Kitty. Meanwhile, Sue checks out the cast list and sees that Wade got the role of Rizzo and she is not pleased.

Finn is really throwing himself into the play and over a talk with Will he finds out that he is going to Washington. While he is gone, they need someone to to manage the Glee club for three months, he asks Finn to do it.