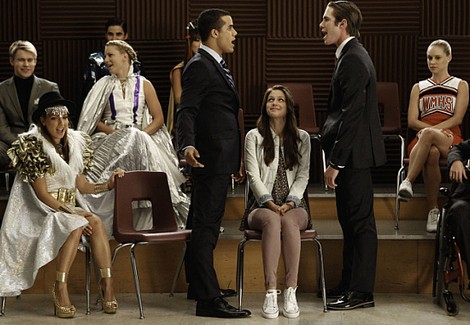 Glee’s fourth season has been wrought with an over-stylized dynamic, a misaligned plot structure, and pointless characterization. Many Gleeks have referred to this season as the “Suicide Season” and “The Season That Will End It All”. The show jumped the shark (passed the point of no return) during the finale of the highly emotional third season – Rachel Berry (Lea Michele) left for New York City to chase her dreams, and all was well in Ohio.

Not entirely. The splitting of the Glee-verse caused friction and heavy handed characterization. The return of Glee did not bring us the familiar faces and the familiar emotions; it rather brought us a hybrid show that was both unrecognizable in its entirety and in its subtlety. Glee changed and morphed into a tacky and mindless form of social commentary. An incessant recycling of ideas occurred during the first three episodes, inside jokes fell through the squishy floor, and characters reached for farcical absolution and salvation. It was the end of Glee as we knew it, and not even a Lady Gaga performance was going to save it from its own destruction.

If a show loses its theme in the doldrums of uninspired writing and music, it usually reverts to a parodied mirror of its former self. The 7th episode, titled Dynamic Duets, will be largely based on a playful superhero theme – think X-Men directed by Bruno Tonioli from Dancing with the Stars. The trailer’s intentional cheesiness is eerily reminiscent of the 70’s/80’s action television shows and films. The maturity levels, unfortunately, went completely down and hit the bottom of the childish lake, as the characters became caricatured and lifeless in Ryan Murphy’s attempt at Gleek redemption. Glee has never taken itself seriously, but perhaps it is time that the show moves away from the pointless comedic instances and become what it once was – a show with endearing characters, subtle beauty, and heart wrenchingly realistic issues.

Unfortunately, Glee’s ridiculous attempts at humour will, in the end, not even be saved by Superman himself. Good night and good luck to our most beloved show. Watch the trailer below and let us know what you think in the comments section. Remember to bookmark Celeb Dirty Laundry for Glee news, reviews, recaps, spoilers, and trailers.