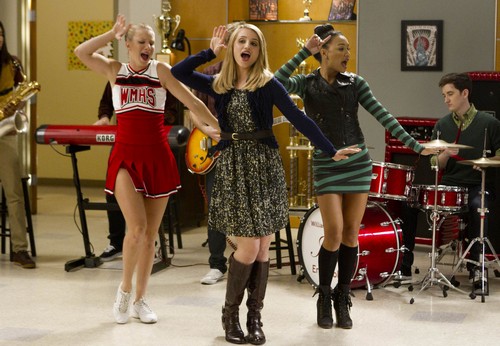 Tonight a whole new episode of FOX hit show GLEE airs called ‘Thanksgiving.’ On tonight’s show Rachel and Kurt are spending Thanksgiving in New York City with Isabelle and missing out on reuniting with their friends.   Did you watch last week’s episode? We did and we recapped it here for you!

On last week’s will be largely based on a playful superhero theme – think X-Men directed by Bruno Tonioli from Dancing with the Stars. The trailer’s intentional cheesiness is eerily reminiscent of the 70’s/80’s action television shows and films. The maturity levels, unfortunately, went completely down and hit the bottom of the childish lake, as the characters became caricatured and lifeless in Ryan Murphy’s attempt at Gleek redemption. Glee has never taken itself seriously, but perhaps it is time that the show moves away from the pointless comedic instances and become what it once was – a show with endearing characters, subtle beauty, and heart wrenchingly realistic issues.

On tonight’s show It’s time for Sectionals, and New Directions receives guidance from some of the recent McKinley graduates who volunteer to mentor the glee club during their Thanksgiving breaks. Meanwhile, Rachel and Kurt have a non-traditional holiday dinner in the Big Apple in the all-new “Thanksgiving” episode of GLEE

Marly’s having a mental narrative about her and her mom’s diets. She says her mom has lost 12 pounds and she’s twirling in a beautiful dress. She says she’s keeping up with her diet even though she’s not lost a lot. Kitty must still be sabotaging her. What a good frenemy she is!

At Breadstix, the six alumni toast that almost all of them showed up – Kurt and Rachel are nowhere to be found. Finn asks the gang a favor. He brings them into Glee club next day. He pairs up mentors to work with the kids. He matches Puck with his brother, Mike with Ryder, Marly with Santana, Kitty with Quinn and Unique with Mercedes (Britney thinks Mercedes has been cloned).

He assigns Blaine and Marly the duet and says they’re doing Gangnam Style for their showstopper, but Santana doesn’t think they can pull off a dance number that big. Sam offers to dance with Britney – he pulls out some of his White Chocolate stripper moves and grosses out the gang. He taps Mike to teach them the dance moves they’ll need.

Jake comes clean to Ryder about taking Marly on a date and promises his intentions are pure. Ryder takes it in stride.

In New York, Rachel and Kurt are rationalizing why they don’t need to go home for Thanksgiving. They’re busy and living their fabulous lives, being their best selves. Rachel promises him they’ll have the best Thanksgiving ever. They even pinkie promise!

Mike’s working the guys out and it’s not going well. Half of them seem rhythm challenged. Ryder breaks out some great moves. Jake seems like he’s thinking game on. He pushes back when Puck says for him to try harder and says it’s not his style.

Britney, Quinn and Santana give the girls pointers on their dance moves. They emphasize that the moves the girls have are something the Warblers can’t compete with. The girls ask for a demo and the unholy trio breaks into the Supremes’ Come See About Me and they’re perfectly synched as promised. The girls cheer.

Santana asks Marly if she’s okay – she says she looks like she’s going to hurl. Marly says she’s just tired. Kitty tells Quinn she worships her. Quinn asks what’s up with Marly. Kitty tells her that she’s dating Jake Puckerman and he’s pressuring her to give up her V card. She’s such an evil little liar.

Marly wants to know why Jake isn’t busting out his stellar dance moves. He says he’s trying to do Ryder a solid and let him have the dance lead since he’s being cool about them dating. She says he’s going to let them blow Sectionals because he’s not stepping up. He tries to walk her to lunch, but she says she’s got to practice. Hmm. Avoid eating again. She’s going to pass out.

Brody announces that he’s teaching Dance 101 because Cassie’s hung over and Rachel is furious that he slept with Cassie. He reminds her that she was the one who ran off to see another guy. They agree to a grudging détente as long as he doesn’t bang her again. They plan to spend Thanksgiving together. Whoa. What about Kurt? Hope she hasn’t forgotten her promise to give him a great holiday…

Puck tells him he thinks it’s nice he’s doing a solid for Ryder. Quinn confronts Jake about pressuring Marly for sex. Jake says it’s not true. Quinn says he’s lying and that he needs to quit distracting Marly from focusing on a win at sectionals.

Kurt finds Isabelle working late. He asks what her plans are and she says she used to go to Gore Vidal’s, but now that he’s gone, she’s at loose ends. He invites her to his and Rachel’s orphan Thanksgiving at their loft. She asks if she can bring friends and agrees to go.

Isabelle asks about him and Blaine and he tells her it’s really done. She recommends accepting Blaine’s apology to help him move on.

Quinn gives Kitty some intense coaching on eye contact and working the judges. Kitty smirks ‘Ola’ at Santana and tells Quinn that Kitty’s pure evil. Santana tells her that Kitty’s giving Marly laxatives. Quinn accuses Santana of being jealous and they get in a little cat fight about who’s doing what and who and whose life is more fabulous. It devolves to a slap fest when Santana snipes about her never visiting her son.

Ryder’s practicing his Gangnam moves, but it’s pathetic. Jake asks if he’s having a seizure. Ryder says he has to learn the words first and then the moves. Jake says he’s overthinking it. He says Gangnam is about letting go rather than technique and he busts out some really killer moves. Jake admits he’s embarrassed that he’s trained in ballet. Ryder says he should take the lead since he’s better and Jake says instead he’ll help him get better. Wow Jake’s a decent guy. Not bad, especially for a Puckerman!

Brody’s in the kitchen bagging up a turkey to cook and Kurt’s griping about his technique. Brody has Rachel helping him cook and they’re flirting heavily. Kurt says it’s almost 5 and Rachel says sectionals is about to start.

Marly’s lamenting about how hungry she is, but she’s glad that she’s thin enough to fit in her dress. Unique shows up in a dress and Marly’s proud of her for being herself. New Directions gets in a circle and ask Joe to say a word of prayer. Finn tells them all how important the circle was at their first sectional and how it brought them together.

At Sectionals, they announce the judges. Then they get down to business – the Warblers are up first singing Flo Rida’s Whistle – I wonder how he feels about his song being featured on Glee. It’s an interesting take on the song and the guys are adorable doing it. They’d be sexier without those silly blazers though… Just saying.

Then they break into One Direction’s Live While We’re Young. They did a cute enough job with that too. The crowd is applauding, but Marly’s starting to look like she’s falling apart. She’s teary and looking none too stable… Uh-oh.

In New York, the turkey’s done and there’s a knock at the door. It’s a bevy of drag queens that Isabelle invited, but she’s not there. She’s invited a ton of people and they all break into Scissor Sisters’ Let’s Have a Kiki. The loft is fabulous and full of dancing and Rachel adds Turkey Lurkey Time (from Promises, Promises) and it’s an oddball mash-up, but pretty fun. Sarah Jessica-Parker has some pipes on her…

Sue, baby Robin and Emma are thrilled when Will shows up just in time to see the Mennonite Show Choir sing She’ll Be Coming Around the Mountain. Their costumes are pretty much not costumes, but standard Mennonite wear, but they sound nice.

Sam peaks out of the curtains and sees Mr. Schuester. Kurt calls Blaine just before they go on. He tells him he’s trying to forgive, but he’s just not there yet. Kurt tells him he can’t not talk to him anymore, though, because he’s his best friend. They make Christmas plans and Blaine is crying and tells him he loves him. Kurt dittoes him back, but looks to be in terrible pain. He heads back into the Kiki, but his heart isn’t in it. Isabelle comes to comfort him with a big hug.

Backstage, Marly’s barely hanging on. Jake asks if she’s okay and tells her she doesn’t look okay. She admits she hasn’t slept in days, she’s sweating and she feels like if they lose, it’s all her fault and she’ll let everyone down. Ryder tells Jake that he needs him to take the dance lead because he’s first string and the group needs him. Ryder insists he do it.

And New Directions is called to the stage. Jake takes her hand and tells her she’s going to kill it. Is it racist that they have Tina singing the Korean lyrics? Finally, when they get to the hook some of the other kids sing. The kids are really doing it up right. At the end of the song, Marly collapses – and it’s not part of the number! Yikes! Her mom looks terrified!