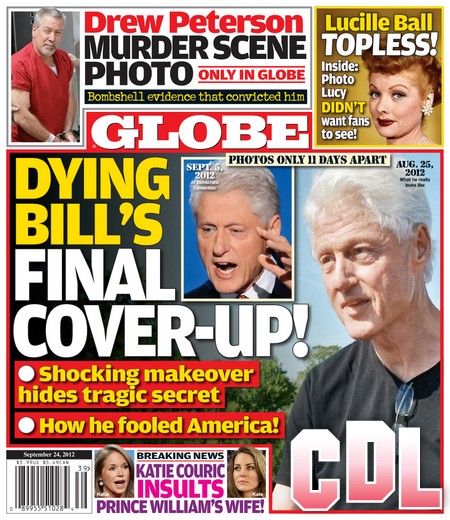 Katie Couric is a high-powered American television personality but does that give her the right to insult Prince William’s wife, Kate Middleton?  Well Katie seems to think that since America has been independent from Great Britain for almost 250 years there is no longer any need to respect the British Royal Family!  Well Couric is about to learn just how wrong she is.  Kate Middleton and Prince William are well-respected the world over (okay, maybe not by the Taliban – who recently threatened Prince Harry’s life) and Kate is as popular in America as any Hollywood star.

GLOBE managed to get right inside this scandal and the entire story is laid out for us in this week’s print edition, the September 24 issue.  I can’t wait to read all the juicy details of this outrage in GLOBE.  What right does Couric have to put down her betters?  She’s just lucky she isn’t located in the United Kingdom or she’d be ostracized and probably lose her broadcasting job.  Couric should save her insults for those insufferable Hollywood fakes to whom she regularly panders.

This week’s GLOBE cover also reveals that President Clinton’s health is deteriorating.  GLOBE has photographic evidence that Bill was made to appear much healthier and more robust during his DNC speech than he normally looks.  Apparently there is a tragic secret regarding President Clinton that GLOBE reveals in the print edition.  What could it be?

Did you know that Lucille Ball took topless photos?  Well somehow GLOBE’s intrepid investigative reporters managed to track down a shocking snap of the late comedienne and we’ll get to see it in the print edition.

The GLOBE cover also promises a detailed analysis of the convicted wife-killer Drew Peterson murder trial including a murder-scene photo exclusive.  This chilling Bluebeard has finally been served some justice and GLOBE will tell you about the bombshell evidence that got him convicted!

This week’s GLOBE promises to exceed my already high expectations for vital news coverage.  GLOBE surely presents the best reporting I read every week.  When I sit down with my copy of GLOBE I know I will enjoy hours of fascinating reading.  Don’t forget to come back later this week for more on the breaking news in this week’s GLOBE.