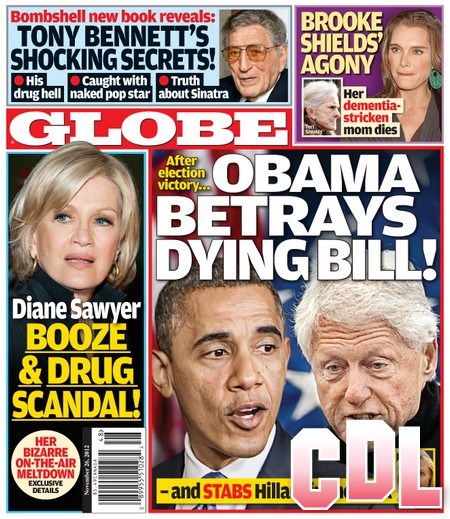 This weeks’ GLOBE has all the details about Diane Sawyer’s election night drunken meltdown.  Poor Diane seems to have gotten into the celebratory spirits prior to getting on the air and appeared drunk , stoned, or both in front of the nation. Diane was slurring her words and appeared even less sharp than usual, and that takes some doing. Diane called the President ‘Barrack O-rama’ and this along with other pronunciation errors and her giddy demeanour led to a social media frenzy of criticism.

Looks like it won’t be long before George Stephanopoulos replaces the over-the-hill news celeb. GLOBE will share all the insider information on Diane’s current condition in this week’s November 26th Print Edition.  It’s sad to see someone disintegrate live on national television.

Naturally the network was spinning excuses almost as soon as Diane messed up.  But the ‘Diane was overtired and underfed story doesn’t convince me.  Do you believe it?

GLOBE also reveals Tony Bennett’s shocking secrets including his ‘drug hell’ and how he was caught with a naked pop star!  This eye-opening Bennett bedlam is contained in a bombshell new book that will be exposed in this week’s GLOBE. Even more intriguing is that we will learn the truth about Sinatra and Bennett’s dealings.  Good old Tony – there seems to be nothing the old crooner hasn’t done AND lived to tell about!

Brooke Shield’s agony after losing her dear mother, Teri Shields, can only be imagined. We were all touched when Brooke had this to say after her mother passed away, “My mother was an enormous part of my life and of who I am today.  I loved her, laughed with her, and respected her.  And although she had her share of struggles, she was my mom.” GLOBE details Teri’s tragic demise due to dementia in the print edition this week.

GLOBE brings us the inside stories that we all want to know about but just can’t find anywhere else. With GLOBE’s intrepid reporting and unerring sense of what matters to its readers we can count on a treasury of enjoyable reading each week.  I’ll be reading my copy ASAP and reporting back to you on some of the hot items I discover!