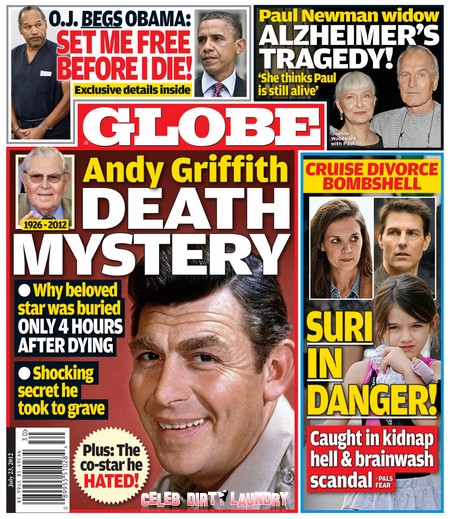 Andy Griffith passed away last week and was buried almost immediately after being declared dead. This week’s edition of GLOBE Magazine has the cover story ‘Andy Griffith’s Death Mystery‘ and promises to reveal a shocking secret that Andy took with him to the grave!

Andy Griffith was a true icon to television viewers and the sad news of his passing was confirmed by former UNC President, Bill Friday. Bill was a close friend of Andy’s and reported that the star of the perennial TV favorite, “The Andy Griffith Show,” died at his own home in Manteo, North Carolina on July 3, 2012.

GLOBE investigates what was behind the reason for Andy’s burial only 4 hours after his death.  The Print Edition of GLOBE explains why Andy’s loved ones skipped the traditional waiting period after death and before burial.  Furthermore we are promised an inside look never before revealed details of Andy’s life such as the shocking secret he took to the grave and the co-star he secretly hated.

Also on this week’s cover of GLOBE we learn that O.J. Simpson is begging President Obama to release his sorry butt from jail before he dies.  Exclusive details of the murderer’s plea to ‘Set me free before I die!’ will be exposed.  Do you think Obama will pardon O.J.?  Would that be politically popular?

GLOBE features a sad expose on Paul Newman’s Widow – Joanne Woodward – she is experiencing the tragedy of Alzheimer’s disease and thinks that Paul is still alive.

We also learn that as a consequence of Katie Holmes filing for divorce from Scientology advocate Tom Cruise, daughter Suri is in danger.  According to pals Suri is ‘caught in kidnap hell & brainwash scandal.’  We hope the child comes out of this very public divorce intact.

This week’s GLOBE promises so much exciting reading that I can’t wait to get my copy!  I’m especially intrigued at the prospect of learning how that snake, O.J., is trying to pressure Obama into letting him loose.  Also – I’m dying to know about that special secret Andy Griffith took to the grave.  Once thing I can count on – GLOBE will make it all crystal clear while keeping me on the edge of my seat!