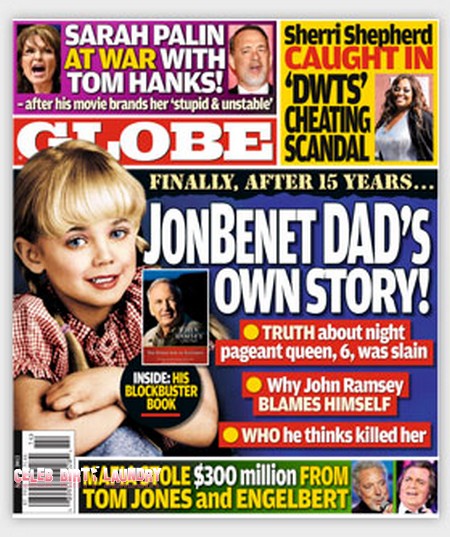 The current issue of GLOBE Magazine features the cover story ‘JonBenet Dad’s Own Story’ – and secrets long-hidden will be revealed!  John Bennett Ramsey is the sole survivng parent of poor little JonBenet who was brutally murdered on Christmas Day, 1996.   JonBenet was killed (she was bludgeoned and strangled) by a person or persons unknown – her body was found in the basement of the family home only 8 hours after she was reported missing.

John reveals the truth about the night the little 6-year-old fashion queen was murdered.  He explains why he blames himself for her death – and most amazingly he reveals who he thinks was guilty of taking his daughter’s life.

Globe has more:  After 15 years, John Ramsay has finally broken his silence about the horrific slaying of his 6-year-old daughter JonBenet in his home. Find out what really happened the night of the still unsolved crime, why the devastated dad still blames himself – and who he thinks killed his little angel – only in this week’s GLOBE.

Ramsey’s wife Patsy died in 2006 of ovarian cancer and both she and her husband were originally the key suspects in JonBenet’s murder.

Various people have been suspected of her murder although it remains unsolved as of the publishing of this post.  JonBenet’s very own brother Burke was also considered a suspect – and there was noise about child pornography that added an especially sordid air to much of the investigation.  John was accused of being a child abuser although this was denied by his wife, son, and sister-in-law.

In July of 2008 John and Patsy Ramsey were officially cleared of JonBenet’s death by the Boulder District Attorney’s office.  This was based on new DNA evidence and analysis that was not available earlier in the murder investigation.

The cover also promises a story that claims Sherri Shepard did the unspeakable and cheated on Dancing With The Stars.  Did she cheat on her husband Lamar Sally or on a dance? Already cheating – wow she sure acts fast.  It turns out that Sherri was sneaking dancing lessons with her DWTS pro partner months before rules permitted her to practice.

We cover everything about DWTS right here at CelebDirtyLaundry – and if you missed Monday’s recap of the premiere episode or want to check out the star’s dances click here.

We will be back later in the week with all the details of the GLOBE cover stories – see you then!