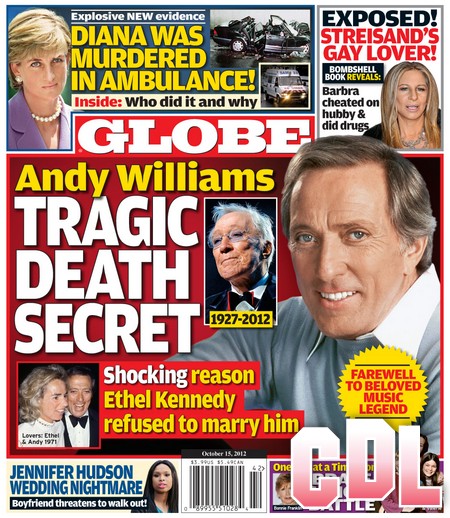 The cover of this week’s GLOBE features a variety of gripping stories but none is more shocking than the explosive new evidence that Princess Diana was murdered in the ambulance that was sent to ferry her to hospital.  Princess Diana was with her man, Dodi Fayed, in a car being chased by rapacious French paparazzi and driven by bodyguard Henri Paul when they crashed.  The official story was that neither Diana nor Dodi were wearing seatbelts and died, along with Henri, as a consequence of injuries suffered in the accident.  However, there has been an entire literature devoted to exploring conspiracy theories that neither the accident nor the deaths of the occupants were in fact accidental.

Claims have been made by many implicating the British Secret Intelligence Service in both the accident and the subsequent deaths – no less than by Dodi’s papa, business magnate Mohamed Al-Fayed!  Conspiracy buffs have long considered senior members of The British Royal Family to be the people ultimately responsible for what they consider to be the ‘assassination’ of Diana.  Now GLOBE brings new evidence to light that may once and for all solve this case!  GLOBE’s October 15th print edition promises to explore the ‘who did it and why’ of this evergreen conspiracy.  We know that Kate Middleton demanded a new probe into Princess Diana’s death – perhaps this investigation has borne some bitter fruit?

Also in this week’s issue of GLOBE we will learn of Andy William’s Tragic Death Secret!  As GLOBE says farewell to the beloved music legend they expose the shocking reason Ethel Kennedy refused to marry Andy.

A Bombshell book reveals that Barbara Streisand cheated on her husband and took drugs!  Even more surprisingly we learn that Barb had a gay lover.  GLOBE has all the details inside this week’s print edition.

And get this – Jennifer Hudson’s fiancé, David Otunga, has threatened to walk out on her!  We really hope that the stress doesn’t drive Jen to take to eating like a horse again.  After all that publicity work losing weight and representing Weight Watchers it would be a shame to have her revert to her old ways.

When I sit down with my copy of GLOBE this week the first article I’m going to read is the one revealing the new evidence about Princess Diana’s death.  GLOBE always manages to get to the hardest to reach sources for leading edge reporting on the royal family, as well as on other topics, and provides information impossible to find elsewhere.    I trust that GLOBE will expose the truth as they always do.  It is refreshing in this day and age when most magazines shy away from the most sensitive topics that GLOBE marches right in and brings the truth back for their readers.