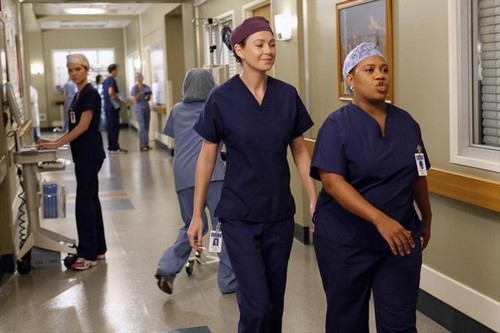 Tonight on ABC is an all new episode of GREY’S ANATOMY. Tonight’s show is called “Beautiful Doom” and in this Meredith & Cristina-centric episode, the two friends continue to cope with life after the plane crash and their ever-growing responsibilities at their respective hospitals. If you missed last week’s episode we have a full and detailed recap here for you.

On last week’s show aware that Derek might never operate again, Meredith stoped talking about the surgeries she was performing. Meanwhile, Richard called on Dr. Catherine Avery to help him perform a complicated procedure, as things continued to heat up between Jackson and April; and Arizona’s struggled to accept her fate forces Callie and Alex to face their guilt.

On the next episode of Grey’s Anatomy, titled “Beautiful Doom,” another traumatic accident occurs, which leaves a patient in a disastrous condition. After a car runs over a civilian, Dr. Grey begins one of the most stressful cases of her career. But, as she works to save this woman, who’s holding on by a thread, she might be getting in over her head — and letting her emotions cloud her judgment. In a preview clip for tonight’s episode, which highlight’s the episode’s main plot, the Chief says, “There’s a limit to how much this patient can take.” Grey says, “I’m trying to save her life!”

In this Meredith & Cristina-centric episode, the two friends continue to cope with life after the plane crash and their ever-growing responsibilities at their respective hospitals. As Meredith juggles taking care of Zola with a case that hits close to home, Cristina assists Dr. Thomas on a challenging heart surgery.

Tonight’s episode looks like it is going to be a great episode and you won’t want to miss it, so be sure to tune in for our live coverage of ABC’s “Grey’s Anatomy” Season 9 episode 5 at 9 PM EST! While you wait for our recap hit the comments and let us know what you think of Grey’s Anatomy season 9, so far? While you wait for the recap check out a few pics of tonight’s episode below.

Tonight’s episode opens with a split screen of Meredith and Cristina starting their days.  Meredith is juggling potty training Zola while Cristina’s car is buried beneath a mountain of snow so she catches a ride with Dr. Thomas. Meredith sees an accident while driving and pulls over to find a woman on the ground trapped beneath a car. The driver, also in rough shape, knocked her off of her bike. The front tire of the car is on the woman’s neck and Dr. Grey screams until  people help her to lift the car off the woman. Somehow she is breathing.

Cristina is working with Dr. Thomas on an aneurysm case. She’s catching heat for working with him on such a dicey case

Meanwhile Grey takes her patient into surgery and things go radically wrong. She is reminded that the woman had tons of twisted metal on her and that her body can only take so much but Grey wants to continue what is obviously a failing effort.  Dr. Webber is afraid that her judgment is clouded because this patients’ injuries mirror those that her sister suffered.

Dr. Thomas is half ordered to surrender his license because Parker believes that he is putting patients lives in danger.  Cristina totally disagrees and believes there is a lot of good for Thomas to still contribute. Plus he saved the life of the aneurism patient and that counts for a lot.

Meredith and Cristina are truly each others rock as they talk on their cells while checking on their patients.

Dr. Grey’s patient has a collapsed lung and she is having a really hard time juggling motherhood with her job. She has coworkers taking care of the baby while she deals with things in the OR. Meanwhile Cristina is behind the scenes fighting for Dr. Thomas. If he performs a procedure then Parker is prepared to fire him. Cristina can’t seem to talk him in to keeping him around so she talks to Dr. Thomas about it. She asks him to reconsider the surgery but he refuses even though he knows that if his patient dies he’ll be fired. He tells her that if it is his time to be fired then he at least wants it to be for something that he believes in. Fighting for this woman’s life is worth the risk.

Dr. Grey decides to take her patient back into surgery but first realizes that no one seems to be keeping an eye on Zola. She was passed around a bit while everyone was in surgery and now she’s with an intern that Grey doesn’t even know.

Both Cristina and Grey end up in surgery simultaneously. Grey is fighting to save her patient who is bleeding profusely while Cristina and Dr. Thomas are very calmly working on their patients heart. Thomas tells her she’ll be the surgeon of her generation. Grey is telling everyone not to panic but seems to be doing just that herself. She manages to get everything under control and suggests it is time for a 30 second dance party.

Things aren’t going as well for Cristina. Dr. Thomas stops responding to her during surgery and gets this far away look on his face before falling to the floor backwards. He lays there as she scrambles to save their patient. She manages to breathe and complete the rest of the procedure as Dr. Thomas dies on the floor in front of her!

See you next week for our Live Recap!