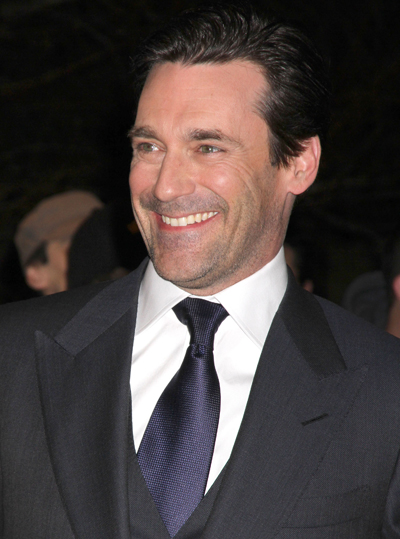 Mad Men star Jon Hamm is the kind of guy that most ladies would love to have a date with (that is, if he weren’t in a long-term relationship with his Friends with Kids co-star Jennifer Westfeldt.) Still, he’s clearly not the kind of boyfriend that would watch trashy TV shows with you, as he recently slammed both Kim Kardashian and Paris Hilton in the latest issue of British Elle, calling them “f-cking idiots.”

“We’re at a place where the idea of being ‘elite’ is somehow considered negative,” he said, reports US Magazine, adding: “Whether it’s Paris Hilton or Kim Kardashian or whoever, stupidity is certainly celebrated. Being a f-cking idiot is a valuable commodity in this culture because you’re rewarded significantly.“

The 40-year-old actor isn’t the only one in Hollywood who has called out the “Kar-trash-ians” in recent months either. Last fall, Daniel Craig had these thoughts to say:

“Look at the Kardashians, they’re worth millions. I don’t think they were badly off to begin with, but now look at them,” Craig reportedly told British GQ. “You see that and you think, ‘What, you mean all I have to do is behave like a f—ing idiot on television and then you’ll pay me millions?'”

Still, while Jon Hamm isn’t a reality show fan, there certainly seems to be enough cable TV channels to accommodate both Keeping Up With The Kardashians and more intellectual, classier fare like Mad Men and Downton Abbey. Can’t everyone just get along? Related: New Kim Kardashian Sex Tape With A White Guy Leaked