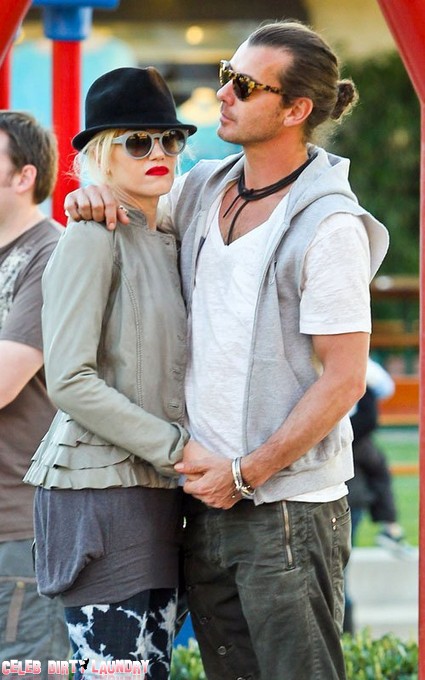 Gwen Stefani has laughed off talk she’s headed for the single life. The state of the No Doubt lead singer and her former cross dressing husband Gavin Rossdale‘s marriage has been in the spotlight for weeks. Reports have suggested the part time fashion designer can’t cope with any more skeletons popping up from Gav’s wild past. Now the platinum blonde is speaking out about her longtime union with the Bush frontman.

So what did she say? Well there was no outright denial. She didn’t profess her undying love for her husband …the Mom of two told Access Hollywood the split is a tabloid beat up  ‘It doesn’t matter – you could have a picture that has nothing to do with what’s going on in a rumour and they make it look like it’s part of the rumour‘ But she joked all those photographers do come in handy in other ways ‘What’s nice is even though they’re annoying, these guys that follow us around, it’s really nice having all these family photos‘.

It’s not the first time the rock ‘n’ roll marriage has hit the headlines. A couple of years after they said ‘I Do’ Gwen learnt she had a teenage step daughter. Gav’s lovechild went public and the Hollaback Girl felt totally betrayed. The British singer’s colorful time in London in the 1980s has also made been dug up. There are even suggestions he had a gender bending boyfriend.

So maybe they’re not the next celebrity divorce …just yet. Heidi Klum and Seal can hang onto the title a bit longer.