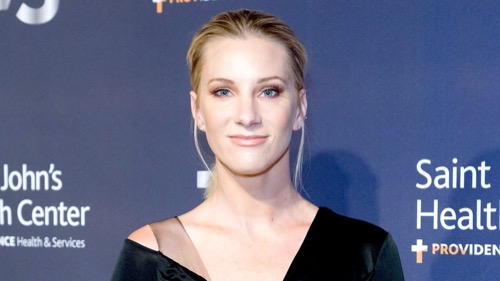 Last weekend we heard about how the phone hacking of Christina Hendricks and Olivia Munn led to a leak of some provocative pictures. This weekend, yet another celebrity has fallen victim to a phone hacker. Nude pictures of Heather Morris, who plays Britney S. Pierce on the hit Fox show Glee, have begun making the rounds online. The full-frontal pictures appear to be self-taken and are reportedly from the 25-year-old’s dancer’s phone.

The photos in question show someone who greatly resembles Morris bent over a desk in a variety of poses, along with a couple of lingerie shots. Morris’ lower back tattoo—of a fairy with wings—does appear to be visible in some of the pictures, as is her face, so it may be hard for her reps to refute the pics.

Anyway, this isn’t Morris’s first time having naked pictures on the net. Some professional shots of the naked blonde surfaced in May of 2010. While those pictures, that were relatively artfully done, caused a bit of heat for the Fox show, it didn’t phase Morris, “I kind of thought it might happen,” Morris told Extra in May of 2010. “I understand completely where it came from.

For me, I think they are beautiful. It’s not something I’m ashamed of.” She also joked about those photos at a Glee screening in April 2010 saying, “Everybody should do tasteful beautiful nudes — so when you get older? you’re gonna be like, ‘Oh that’s when my body looked so great!’”

While the 2010 photos were easily filed into the “art” box, these latest pictures are a lot more graphic and seedy (maybe she should have used instagram).

No word from Morris or her reps yet.