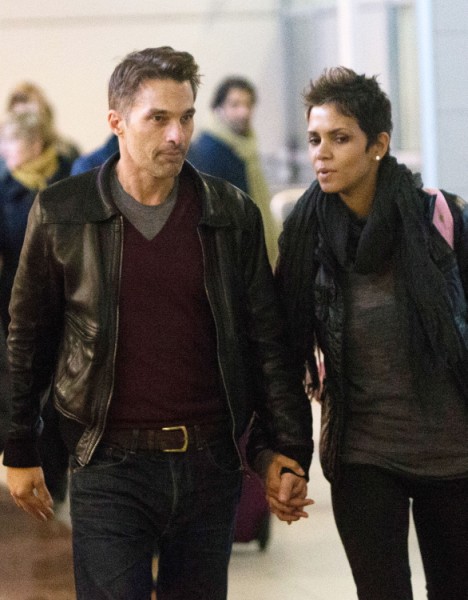 Maybe being on two different continents is good for Halle Berry and Gabriel Aubry. They don’t do holidays very well.

It seems like only yesterday when Gabriel got his face bashed in by Olivier Martinez during a routine child drop off. Can you believe that was Thanksgiving? Time is flying! Anyway, so it looks like Gabriel got Nahla for Christmas because Halle and Olivier were snapped arriving in Paris yesterday sans her daughter. I don’t understand holding hands in an airport. Really? You just got off a long flight, you’re probably tired and you have to hang on each other through baggage claim? I’d be all like “I feel gross and just want a shower!” I digress.

So the headline is a tad harsh. Obviously Halle didn’t abandon Nahla because she and Gabriel have some sort of agreement. They must switch off for the major holidays. Suri Cruise is staying with Tom Cruise this Christmas. Why doesn’t anyone think Katie Holmes abandoned her daughter? Still… did she have to go all the way to Paris on some little lover’s mini break? I know Olivier lives there but it just seems odd to me. Your daughter is presumably with her father in America for a few days and you jet to Paris. Is Paris with your boyfriend really that important? I know! I know! But what is she supposed to do, sit around miserable by the phone in Malibu waiting for Nahla to call? Maybe Halle has some special Christmas planned when she gets back? I think I just can’t stand Olivier Martinez. I still believe he left Kylie Minogue while she had cancer and he’s just always left a sour taste in my mouth. He lives in Paris. He’s pushing the whole “celebrity kids are safer from the paparazzi in Paris so you should move there” thing and Halle Berry is an odd bird who will put herself in stupid situations because bioth is crazy. I just can’t help but feel like he instigates a lot of the Halle/Gabriel discord and she just goes along with it because she needs to have a man in her life.

Am I wrong? I could be totally wrong. This is just the vibe I get. Let me know if you think something completely different. Does it look like Halle Berry abandoned Nahla for Olivier at Christmas? Halle Berry has no other choice right, but did she have to leave the country? Does that seem a little extreme?