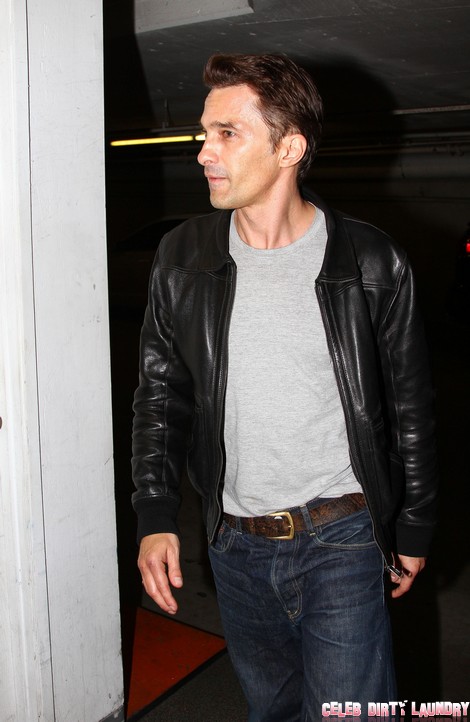 The ongoing battle between Gabriel Aubry and Halle Berry is taking an interesting turn today. After the heavily publicized Thanksgiving brawl between Aubry and Olivier Martinez, a judge issued an emergency protective order that consequently blocked Aubry from coming within 100 yards of Berry, Martinez, and his beloved daughter Nahla. Berry has since the brawl been acting like the victim of a natural disaster, and even requested a heavy bodyguard presence in the wake of the attack.

According to TMZ, Aubry is rushing to a family court today to request that the emergency protective order is lifted with immediate effect in order for him to see his four-year-old daughter again. Aubry’s lawyers will argue that Martinez instigated the fight and beat the male supermodel to a post Chris Brown beating Rihanna-looking pulp. Purportedly, Martinez hit Aubry in Berry’s motor court and slammed his head repeatedly against the concrete. Pardon us for sounding dramatic, but if Martinez was acting in self-defense, he wouldn’t have continuously beaten Aubry with his fists and he definitely wouldn’t have slammed his head against concrete. This was a rage filled vengeance by Martinez, and any lawyer worth his/her salt would be able to argue that in a court of law.

The raging battle forces you to choose sides. Do you choose the victimized Aubry, or do you choose bitchy Berry and moaning Martinez? Let us know your thoughts in the comments below and remember to bookmark Celeb Dirty Laundry for our continuous and thorough updates on the Berry/Martinez/Aubry feud.

French actor Olivier Martinez stops by a medical building in Beverly Hills, CA on November 26th, 2012. Olivier was recently involved in a fight with his girlfriend Halle Berry’s ex Gabriel Aubry. Olivier’s hand still appears to be healing from the fight!