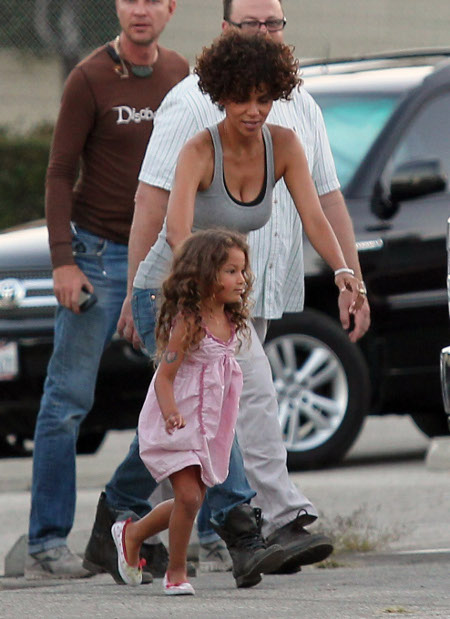 Halle Berry continues to find herself entangled in a bitter custody trial with her baby daddy Gabriel Aubry. Halle is begging the judge to allow her to move to Paris with Nahla, their four-year-old daughter, but Aubry is crying in his Calvin Klein briefs and saying, “Over my dead body!” Once upon a time, back when Kim Kardashian and Lindsay Lohan were still figuring out their lives, Halle Berry was the buzz word for all things film. She was a Bond girl, a crazy woman in Gothika, and won an Oscar for Monster’s Ball. Today, Halle is a washed out wannabe who has to make way for the younger Hollywood crowd.

Halle is currently engaged to French actor Olivier Martinez, but is still embroiled in scandal and sadness with Aubry. They have been fighting over this kid ever since their break-up in 2010 and there seems to be no signs of slowing down. Why would Halle like to move to Paris, France? Is it to enable her to spend as much time as possible with Olivier? That’s absurd, because we doubt neither Halle, nor Martinez, are afraid of flying. Why would she want to run away to Paris with the poor child?

She has dated more men than Elizabeth Taylor and Taylor Swift combined, but she’s still thundering ahead, smashing her life to pieces by being absurdly ludicrous. Aubry, who is stationed in Montreal, Quebec, has a right to see his daughter, but the broken moral compass of Berry is sending her east, to Europe, away from all the trouble that the United States have brought her –- like a failed career.

All we can say? Cette salope a besoin de se renseigner avant elle épaves. Or, in other words, this bitch needs to check herself before she wrecks herself. Let us know in the comments below what you think about the latest quantum entanglement forcing itself apart between these two.