Kristen Stewart Drinks Her Sorrows Away With Lindsay Lohan 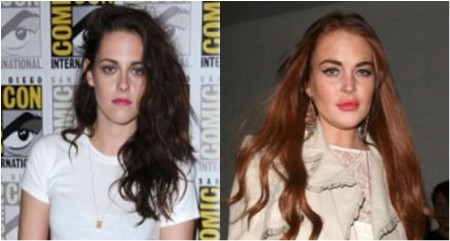 Kristen Stewart partied with Lindsay Lohan yesterday. Yep, you heard me… Lindsay… Lohan. Well, if Kristen’s going to talk to anyone about what she’s going through, why not Lindsay? She’s been at the heart of more unsavory stories than… well, ANYONE. And, really, you can always rest assure that when you’re at the same party as Lindsay Lohan, you aren’t the biggest f-ck up in the room.

X17online exclusively reports that the two fallen actresses were seen together at a house party yesterday in Huntington Beach. Apparently, Kristen’s brother, Cameron Stewart, is a big surfer and they took in a surfing contest and hit up the party afterwards. I have no idea why Lindsay was there. She’s like a shark that smells blood when there’s a party around and no security at the door to keep her out.

Do you think Kristen and Lindsay talked? Can’t be sure but I would bet my first born that Lindsay tried because you know Lindsay still thinks she matters and she’s even delusional enough to believe that she’s a bigger star than Kristen.

I truly hope Kristen stayed away. She doesn’t need Lindsay clamoring for a photo op of their arms wrapped around each other as best buds for her to flash all over her twitter page. Lindsay is the queen of self promotion. Just wait, there will be a story mysteriously leaked tomorrow about how Lindsay held a crying Kristen in her arms as the two sat in the sand overlooking the ocean. Lindsay was the special person she could turn to. Lindsay has been through so much and Kristen just knew she would be the only one who could understand the stress she’s going through. Let’s throw down a collective b-tch please. Kristen might hate herself at the moment but I’m sure she still has an ounce of pride in there somewhere. There’s no way a conversation happened. And if I find out there was then Kristen Stewart is officially dead to me. Dead! First Rupert Sanders, then Lindsay Lohan? I would seriously have to wonder if Kristen actually wants to ruin her reputation in Hollywood!

However, maybe it was a good thing Kristen got to see Lindsay. Perhaps she picked up on the special lesson we all have to learn when we’re in our early 20s and can only think about ourselves and feel the earth is crashing down on us. All Kristen had to do was watch Lindsay attempt to work the room in hooker heels and a barely there bikini looking like a freshly dyed Lucille Ball on crack and realize – it can always get worse.

Do you think Kristen gave Lindsay the time of day? On a scale of 1 to 10, how jealous do you think Lindsay is of Kristen’s current scandal? My guess is definitely 10!