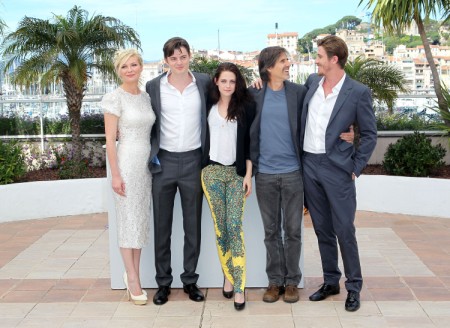 Don’t expect Kristen Stewart to climb out of her hole any time soon because the “most hated woman in Hollywood” just dropped out of the London premiere for her highly anticipated film, On the Road. Radar Online reports Kristen doesn’t want her scandal to detract attention away from the film. And to be totally real, she’s also worried Tom Sturridge will b-tch slap her on the red carpet and that she’ll get heckled unmercifully on Rob Pattinson’s home court.

“Kristen won’t be doing the red carpet for On The Road – she’s too ashamed to show her face in public right now,” a source revealed to Radar Online. “After everything that has been said, and in light of the revelations that she cheated on Robert with director Rupert Sanders, she’s running scared at the moment. There’s also the dilemma of standing next to her co-star in the movie, Tom Sturridge. He’s very close to Rob and Kristen thinks it would be awkward for her to promote the movie on the red carpet alongside him. Kristen is very proud of her work for On The Road, she grew up reading Kerouac novels and this is a production she always wanted to star in. If she appears at the London premiere, it will detract people from the movie itself and Kristen doesn’t want that at all. She wants her performance and this film to be recognized for what it is – a great adaptation of a classic book.”

Hey, I don’t blame her. These are legitimate concerns. I wouldn’t be in the same country with Sturridge right now if I was Kristen. He’s Rob’s best friend! Nope, smooth move in staying away. Kirsten Dunst comes out the winner on this one. She gets to walk the red carpet as the only other major female star in the film and she can bask in her comeback attention without everyone going crazy for Kristen. Way to be unselfish (and clearly frightened) Kristen!

But who really cares about the premiere? It won’t hurt her not to go. What’s really disappointing is that she might be dropping out of the Nick Cassavetes movie, Cali. Everyone’s favorite bisexual homewrecker, Amber Heard, is in talks to take over. Is this the reason why Kristen was freaking out at Nick in the gym parking lot? It’s a shame because Kristen really wanted that movie. She was signed on to produce and it was right up her “I’m only going to take on dark and haunted roles post-Twilight” alley. Oh well, she’s still got Lie Down in Darkness to look forward to. Snagging that amid all this scandal is still something to be psyched about.

Now we can’t talk about Kristen’s lighter schedule without commenting on Rob’s jam-packed one. Good Morning American just found out it got screwed with Rob’s exclusive interview next Wednesday. The actor signed up to go on The Daily Show with John Stewart on Monday, Aug. 13, to promote his new movie, Cosmopolis. He can’t pull a Kristen and not show up for the publicity tour. He’s the big name. He’s the star. And despite everything Kristen has done to him in recent weeks, he’s being a big boy and fulfilling his work obligations. I think that says a lot about Rob. I’m still on the fence about his acting but he’s making me like him at the moment.

If I was Rob (and I guess Kristen too) I’d watch Hugh Grant’s interview on The Tonight Show with Jay Leno. It’s a classic. It’s awkward and odd and off-putting but, by the end of it, YOU’RE rooting for Hugh because he showed balls just being there. Hugh knew Jay wasn’t going to crucify him over his prostitute scandal but he was still visibly nervous and yet charming as ever while he copped to cheating. And I know Hugh was the one at fault whereas Rob is the victim in this story but the clip still shows how to handle an uncomfortable situation. If I gave a class on celebrity damage control, this would be the first clip I made my students watch the second they say down. It shows everyone can be redeemed. There’s nothing a celebrity can do that can’t be forgiven (see also: OSCAR WINNER Roman Polanski). With a little bit of humor, a flip of some well-coiffed hair and an English accent, you can get through anything. That doesn’t help Kristen too much, so maybe it’s a good thing she’s staying in, but it definitely can’t hurt Rob!

Are you annoyed that Kristen is shirking her promotion duties or do you think she’s right to continue to stay away?