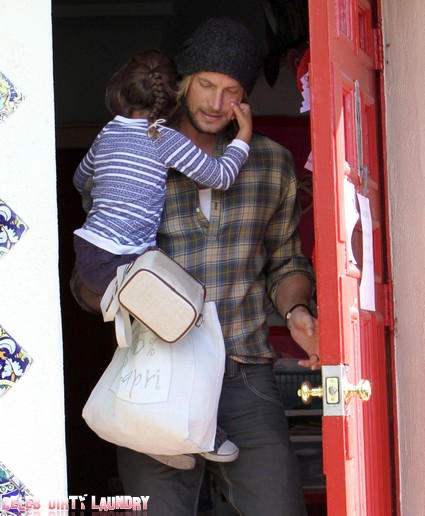 Gabriel Aubry shouldn’t have hit the nanny – now he will reportedly lose his legal right to unsupervised visitation with his daughter by Halle Berry, with whom he shares custody. Gabriel is currently being investigated on misdemeanor battery and child endangerment charges following an altercation with three-year-old Nahla’s nanny, Alliance Kamden. Los Angeles County Department of Children and Family Services (DCFS) will recommend that the youngster’s mother Halle Berry retains primary custody of Nahla and that Gabriel be barred from spending any time alone with the child. Halle has been trying to protect her daughter from the brute and it looks as though she has finally succeeded.

A source told RadarOnline:  “Social workers have recommended that Halle maintain primary custody of Nahla. Nahla spends most of her time with her mother. DCFS has also made a new recommendation that Gabriel not be alone with Nahla.  Case workers are recommending that a nanny be present with Gabriel during his visitation times. Halle’s nanny had been with Nahla when Gabriel had his custodial time from noon until she went to sleep.”

“However, after the alleged incident between the nanny and Gabriel, that hasn’t been in place, and he has been alone with Nahla. It will be up to the judge to implement the recommendations.”

Gabriel is very upset with the recommendation. He has already been asked to take anger management classes – and he agreed. This implies that he is guilty of angry and violent behaviour and should not be near a little child until he learns to be a man – not a bullying creep.

The source added:  “Gabriel is fighting having another person with him, he feels that Halle is trying to make his time with their daughter as uncomfortable as possible.”

Gabriel only has himself to blame for this. His behavior is violent, loud, and frightening – Halle hates him and with good reason she is trying to protect Nahla from his toxic influence.