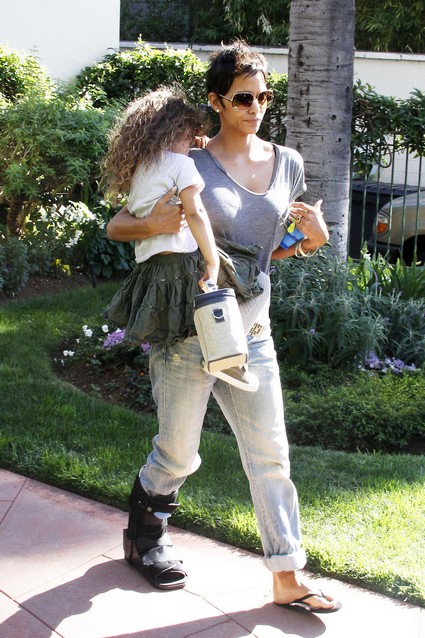 Halle Berry is going to court this morning, PST, to request an order prohibiting her baby daddy, Gabriel Aubry, from having any contact with their daughter, 3-year-old Nahla, until the child endangerment investigation against him is resolved. Halle and Gabriel have had a long and bitter history of conflict over their child – with Gabriel appearing to resent Halle’s efforts to dominate control and influence over Nahla. Halle has shown that she will use every and all legal means to thwart Gabriel in his efforts to have equal rights to the child. As we reported on Celeb Dirty Laundry, the conflict between Nahla’s parents went nuclear about a year ago.

As we reported yesterday on Celeb Dirty Laundry Gabriel is being investigated by the Los Angeles Police Department for criminal battery and child endangerment stemming from his disputatious relationship with Nahla’s nanny, Alliance Kamdem. The investigation was prompted by a complaint that Gabriel allegedly pushed the nanny with Nahla in her arms. Before the alleged pushing, the nanny says Gabriel screamed at her and hurled a racial epithet. In addition the L.A. County Dept. of Children and Family Services is also conducting a child endangerment investigation. Kamdem quit last week after the incident in which Gabriel allegedly shoved her.

Kamden, the angry nanny, has given police a horrifying picture of Gabriel’s parenting.

TMZ reports:  TMZ has learned more about what nanny Alliance Kamdem has told the cops. Law enforcement sources tell us … Kamdem claims Gabriel repeatedly yelled and cursed at her, often while Nahla was present. Kamdem also says it got so bad … Gabriel would make her sit in a corner in his condo until he called for her.

Kamdem also claims Gabriel often yelled at Nahla, causing the child to cower and cry. And she told police… when Nahla had a rash he refused to treat it.

Of course Gabriel is not taking all this lying down and his rep tells TMZ: “Anyone can file a police report at any time, regardless of it being accurate.”

Is this an exaggerated story, largely fictional, made up by the nanny – perhaps with Halle’s help? Or is Gabriel a terrorizing monster who should be banished from being near his little girl? The courts will decide and then we’ll know more. Given how the courts did in in deciding the truth in O.J. Simpson’s and Casey Anthony’s murder cases, I’d trust TMZ to determine the truth here.