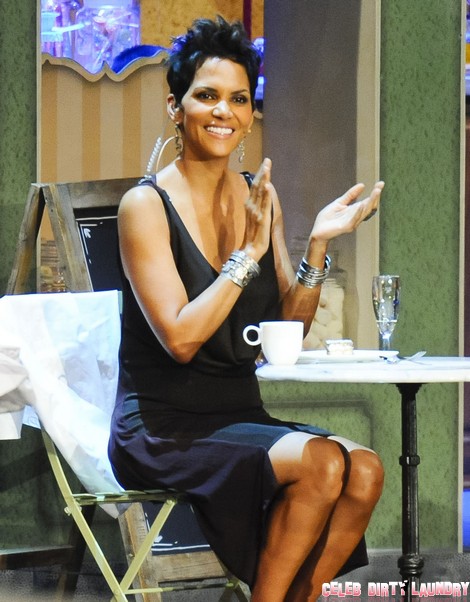 We’ve been following the Halle Berry Thanksgiving brawl very closely here on Celeb Dirty Laundry. If you’ve been corrupted by the Kardashians and haven’t been able to pry your eyes away from their show, here a quick recap:

Berry’s ex-partner, supermodel Gabriel Aubry, became involved in a physical altercation with her current fiancé, Olivier Martinez. Aubry dropped off Nahla at Berry’s home on Thanksgiving, after which Martinez and Aubry attacked one another. The brawl resulted in a broken rib, face, and misdemeanor battery charge for Aubry, while Martinez only suffered from a busted hand and a bruised ego. After the initial story broke, we theorized that Aubry was a victim of Berry and Martinez’s manipulation, but at the time of this report, new evidence emerged from the alleged security camera footage of the fight.

Since the fracas, a judge ordered an emergency protective order that keeps Gabriel 100 yards away from Berry, Martinez, and Aubry’s four-year-old daughter Nahla. We theorized that this was the initial ploy constructed by Berry and Martinez in order to keep Aubry away from Nahla for good, but readers fail to understand that although a fight was documented by the police and by security footage, there’s still a massive margin for error. Aubry might have dealt the first blow, but there’s no information on whether he was provoked and/or taunted by Martinez and/or Berry.

We alleged that Aubry would never initiate such a brawl in front of his daughter, but according to latest reports, Berry took Nahla into the house when the fight broke out, which makes our initial argument moot. However, we still stand by the fact that Aubry would never purposefully endanger his parental rights and/or his relationship with his daughter and ex. Berry and Martinez attempted to take Nahla permanently to Paris a month ago, but a court ordered decision haltered their plans. The resulting brawl was merely a symptom of this borderline kidnapping, and as we know Berry, we suspect that she was irked with the court’s decision and crafted a manipulative ploy to paint Aubry as the villain in the story.

On Friday, Berry received a police escort as she took Nahla to a theatre in Los Angeles. The actress and her daughter were driven to the famous Nokia Theatre in a black SUV, surrounded by police on motorcycles. Martinez did not join mother and daughter on their theatre trip, but instead opted to visit a liquor store to nurse his wounds from Thursday’s brawl. In contrast, Aubry was covered in blankets on the back seat of an SUV when he was released from an LAPD jail on Thursday night. Bail Bondsman David Perez of David Perez Bail Bonds paid Aubry’s $20 000 bail, before picking him up just after 6pm on Thursday evening.

Berry’s piggybacking on resultant sympathy has reached a new level of eccentricity. Why does the actress require a police escort? She’s not in danger from being executed by the Russian Mafia, nor is she in danger from being struck down by an enraged Aubry. Her unhinged and manipulative methodologies only serve as a disguise for her underlying plotting. We know she is to blame for the brawl, but instead of owning up to her actions, she is instead acting like a victim of abuse. We might never know what went down at the Thanksgiving brawl, but the repercussions and consequences from the childish fight will have a scarring impact on Nahla’s life.